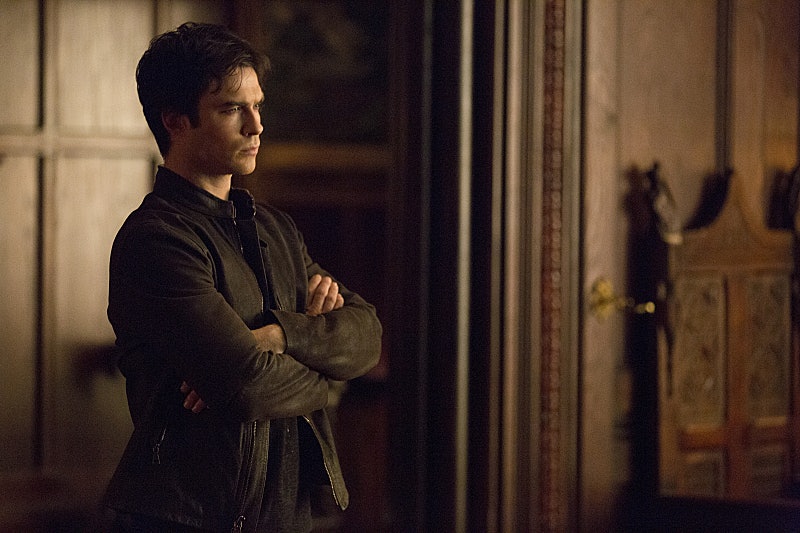 Is it possible that Bonnie's Grams didn't try to save her granddaughter after all. Last Thursday, TVD fans finally got confirmation on Bonnie and Damon's location, though I can't say that was a surprise. Julie Plec did drop the ultimate hint for fans a week before the episode aired — so where are the most-mourned vampire and witch around? Bonnie and Damon are in 1994 on The Vampire Diaries — May 10, 1994, to be specific. And, obviously, they're going to have figure out how to get back home. But why are Bonnie & Damon in the '90s in the first place? Grams and the solar eclipse might have the answer.

At first, when Plec revealed that the better question about this pair's location was, "When are Bonnie and Damon?" and not "Where are Bonnie and Damon?" I was kind of annoyed that TVD was going to introduce time-travel into its already saturated supernatural storyline. But after Tuesday night's episode, "Yellow Ledbetter," I came around to the idea that this might've been a great way for Plec to reset the series like she'd promised.And she might be doing it by doling out some interesting lessons for Bonnie Bennett.

It's no secret that Bonnie's abused her powers over the course of TVD. I mean, she's had to call for help from her ancestors multiple times, she's almost died while doing magic, and her Grams warned her more than once to get it together. Well, obviously, Bonnie never did — which is what landed her and Damon on The Other Side when it collapsed in the first place. So, on Tuesday night, when Damon complained about being trapped in his "personal hell," I believed it — at first — and started trying to figure out what Damon might've done on May 10, 1994 to land the pair back there in a Groundhog Day-type situation. I'm starting to think now, however, that I might've been looking in the wrong place and that maybe, just maybe, this is Bonnie's "personal hell."

OK, "personal hell" might be the wrong phrase — more like, Bonnie's second chance. Early on, in Tuesday's episode, Bonnie explained that her Grams had made "a sacrifice" to keep Bonnie safe while The Other Side was collapsing and that she thought Damon got dragged along with her when they held hands. The latter makes perfect sense, but it's the former that's got me wondering why 1994 and why on the day of a solar eclipse?

Well, it's a simple theory: Bonnie's Grams is trying to teach her a lesson about magic and once Bonnie figures it out, she'll most likely be able to get herself and Damon back home. (Even though they don't really have homes to go back to now that Elena has no memory and Mystic Falls is a supernatural-free zone.)

So, how does this theory work? Well, after Bonnie mentioned her Grams, I got to thinking about witchcraft on TVD and solar eclipses. There have absolutely been times on TVD where magic has required some type of celestial happening to be performed correctly so there must be a connection there, right? Absolutely. But one particular myth about solar eclipses struck me as interesting — especially when TVD has put out into the universe the possibility that Bamon might happen in Season 6.

According to a post on National Geographic's site, the Batammaliba people in Togo and Benin in Africa believe that during a solar eclipse, "the sun and the moon are fighting" and the people try to convince them to stop. And cultural astronomer Janita Holbrook says of the people during the time during the eclipse, "They see it as a time of coming together and resolving old feuds and anger. It's a myth that has held to this day."

I'm sorry to burst your bubble anti-Bamon fans — heck, I'm sorry to burst my bubble. I'm digging pretty deep here, but Bonnie's Grams might know something Bonnie doesn't even know about the future of Bamon on TVD. And maybe Grams intended for both of them to return to 1994 to sort out their mutual dislike for one another so that they can realize their true feelings? Obviously, this is a stretch, but this is absolutely the kind of thing Julie Plec might do to convince fans that Bamon is a 'ship worth supporting. (I'm still not convinced, but OK.)

In the case that the eclipse is not about Damon and Bonnie getting it on (PLEASE, TVD GODS, DON'T LET IT BE SO), the Nat-Geo post also introduces a Navajo myth about the solar eclipse that states, "Something like an eclipse is just part of nature's law. You pause to acknowledge that that time is special, [and] you reflect on the cosmic order." Which also makes sense for Damon and Bonnie's situation — if, in fact, Grams "sacrifice" was a way of teaching her granddaughter a lesson. Bonnie has no regard for the order of things, which she's proved many a time with her emotional decisions to bring Jeremy back even when the ancestors advised her not to. Bonnie challenged and broke the order so many times that it makes perfect sense for Grams to send her back to a time without magic and have her start over with an understanding of how things are supposed to work.

Of course, it's entirely possible that Julie Plec just thought having Bonnie and Damon live the day of a solar eclipse over and over seemed poetic. And there's actually no significance to at all to the mythology of the celestial happening. But, I mean, Bonnie's a witch — it's impossible that Plec just thought the solar eclipse looked pretty. RIGHT?