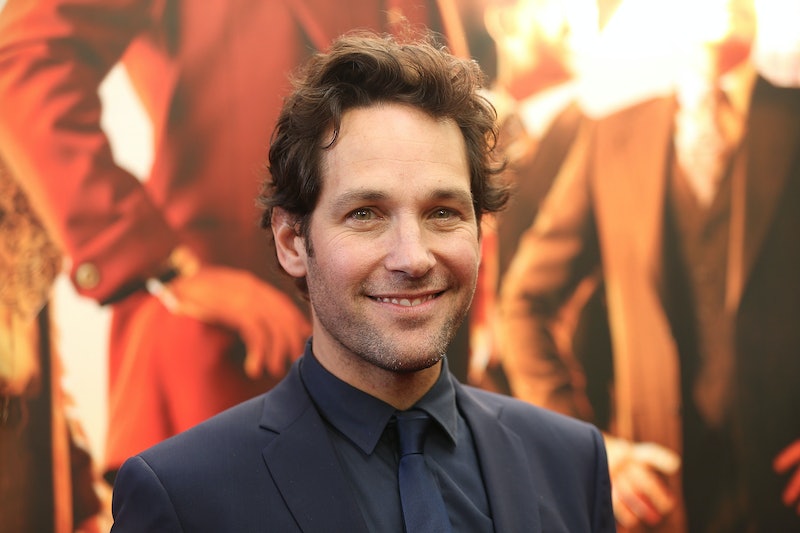 I am not a sports fan, but if anyone could turn me into one, it would most likely be the otherworldly perfect angel who masquerades as human Anchorman actor Paul Rudd. Besides having the ability to play roles as hilarious as they are heartfelt and sweet, he just seems like a great guy. The kind of guy you'd want to go for a bike ride with. The kind of guy you'd want to have a picnic with. The kind of guy who invites an entire city to a kegger at his mom's house after the Kansas City Royals defeat the Baltimore Orioles and move on to the World Series for the first time since 1985, you know? But really, that last part actually happened — Paul Rudd did invite Royals fans to his mom's place — and it was great.

Since he spent his childhood in Overland, Kansas and went to the University of Kansas, it's no secret that the soon-to-be-star of Antman is a raging Kansas City sports superfan. In 2007 he narrated the season of HBO's hit show Hard Knocks when it followed the Kansas City Chiefs throughout their preparations for the upcoming football season, and he's brought along celeb pals like Jon Hamm and Rob Riggle to a few Royals games in the past. After the baseball team's landmark win over the Orioles last night, Rudd was so overjoyed that he not only lost his voice, but invited fans back to his mom Gloria's house for a casual kegger in an interview with KMBC News. He said there would be a $5 cover charge, but I'd pay $5,000,000 to get a chance to hang with him, tbh.

While Rudd might put most fans to shame with his dedication, there are a few other celebs who are just as crazy about their teams, and go above and beyond when it comes to their love of the game.

Does anyone love Boston as much as Ben Affleck? No. That's a hard no. The Red Sox fan is so devoted to his team that when the director of his most recent movie, Gone Girl, asked if he'd wear a Yankees hat in a scene, he straight up refused. GO SOX!

2. Will Smith — The Philadelphia 76ers

Will Smith hasn't forgotten about his line, "In West Philadelphia, born and raised," from The Fresh Prince of Bel-Air. The superstar actor is a giant Philadelphia 76ers fan, is a part owner of the team, and can be found sitting court side at most of their games.

The Sin City actress and her hubby Cash Warren are big Golden State Warriors fans thanks to their friendship with former guard Baron Davis, so if you haven't seen her around in a while, she's most likely hangin' in Oracle Arena somewhere.

The Mets might not be the most successful team in baseball, but at least they can count funnyman Jerry Seinfeld as a big fan and part-time commentator.

Lady Gaga might love the Yankees, but it's not clear if they love her back. After the dedicated NY fan got rowdy for her team in 2010, they threatened to ban her from the stadium. She's just passionate, OK?!

Snoop is a big Pittsburgh fan in general, but his love of the Steelers is seriously intense. There was a mini-scandal this past season when he lashed out at the team's offensive coordinator Tom Haley on Instagram when they lost a game to the Buccaneers at the last second.

7. Vince Vaughn — Chicago. Everything in Chicago.

Vaughn goes hard for his Chicago teams. Regardless of whether he's screaming his lungs out at a Blackhawks game or a showing up to support the Cubs, he's there.

Can you imagine who must be a part of the fantasy football and baseball leagues in these celeb circles? Also, can I join? OK, cool.