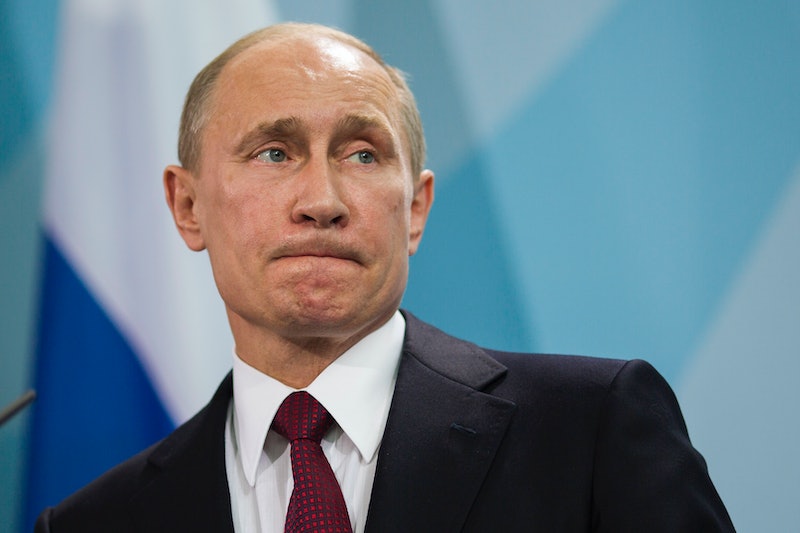 It's a day in 2014, and you all know what that means: another reason to become exasperated with Vladimir Putin. This week he isn't invading Crimea or finding new ways to persecute LGBT citizens, but Russia is considering laws that would encourage women to rethink certain tattoos. I guess it must be a slow week in Russian government. (But seriously, how did Putin get nominated for the Nobel Peace Prize?)

The legislation currently debated by the Russian parliament would require tattoo parlors to inform women of the "risks" associated with getting tattoos on their lower backs. Supposedly, this is meant to be a way of protecting consumers. In theory, lower back tattoos can cause problems during childbirth by increasing a woman's chances of infection from an epidural, since the needle would have to puncture the tattoo.

That's the theory anyway. In reality, reported cases of epidural complications due to a tattoo are very few and far between. Furthermore, according to the Mayo Clinic, a lower back tattoo should only prevent a woman from getting an epidural if "the tattoo is red, swollen or oozing fluid — or if the tattoo is recent and the affected skin is still healing." In other words, unless you're already pretty darn pregnant when you get inked or you don't plan on ever treating the tattoo if it gets infected, you're fine.

Which is good, because when it comes to child birth, it's nice to keep all pain management options on the table.

So given that the actual medical information available on the subject of lower back tattoos and epidurals says that this is a complete non-issue, the Russian parliament's interest in the subject probably means one of two things. Either Russian lawmakers are grossly misinformed about the potential risks, or they are just looking for an excuse to enforce more "modest" types of behavior. In other words, they are anti-tramp stamp.

Or, maybe, they're just really bored and trolling or something.

Given Russia's overall conservative stance on women's issues, it's unfortunately not unlikely that this really is just a way of policing women's bodies and trying to discourage "immodest" behavior using scare tactics to frighten women away from certain forms of self-expression.

Then again, we here in the U.S. really aren't that great when it comes to upholding women's rights to bodily autonomy, either. So maybe we shouldn't judge.

But seriously, Russia, lay off.

More like this
The Best Underwear For Sensitive Skin, According To A Dermatologist
By Alexa Vazquez
TikTokers With Eczema Are Opening Up About Topical Steroid Withdrawal
By Kui Mwai
Lenny Kravitz Just Made Toothpaste Sexy
By Caroline Goldfarb
13 Non-Toxic Sunscreens Under £35, So You Can Glow Responsibly
By Lauren Sharkey, Rebecca Fearn and Jessica Morgan
Get Even More From Bustle — Sign Up For The Newsletter