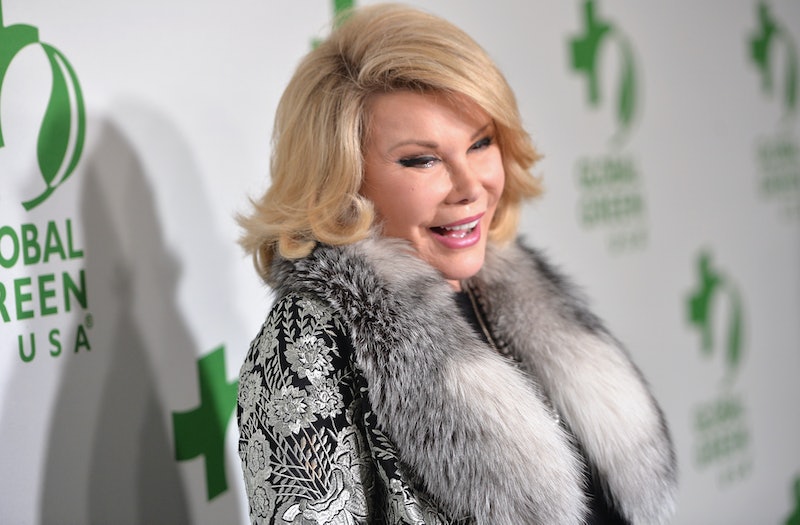 Even now, the world is still mourning the loss of abrasive comedy legend Joan Rivers. Though she was one of many icons and celebrated figures that we have lost over the course of 2014, Rivers' cause of death was the only one that remained as of yet unclear. The mystery was finally solved on Thursday, when TMZ reported that Rivers' cause of death was pulmonary arrest that led to brain damage.

According to the TMZ story, Rivers was undergoing a throat procedure at the Yorkville Endoscopy Clinic in order to evaluate changes in her voice and also deal with her acid reflux. However, there was a "predictable complication" during the surgery that caused her to go into pulmonary arrest. This cut off the oxygen to her brain and caused her to suffer brain damage, all of which eventually led to her death.

[Office of the Chief Medical Examiner] has completed its investigation. The cause of Ms. Rivers’ death is anoxic encephalopathy due to hypoxic arrest during laryngoscopy and upper gastrointestinal endoscopy with propofol sedation for evaluation of voice changes and gastroesophageal reflux disease. The manner of death is therapeutic complication. The classification of a death as a therapeutic complication means that the death resulted from a predictable complication of medical therapy.

In a further statement to The Hollywood Reporter, daughter Melissa Rivers was quoted as saying, "We continue to be saddened by our tragic loss and grateful for the enormous outpouring of love and support from around the world. We have no further comment at this time." Now that Rivers' family, friends, and fans know the cause of death, hopefully the resolution of this final mystery can finally help them start to heal from their mourning period.