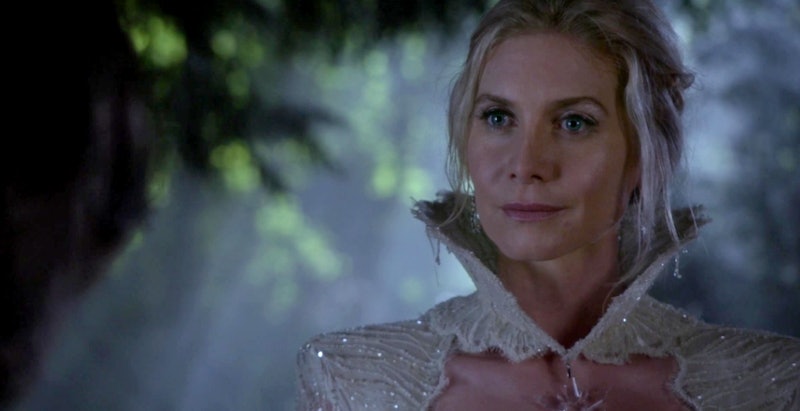 As a lifelong Disney fan, I like to pretend I know what twists are coming on Once Upon A Time. As a diehard — always and forever — Lost fan, I like to pretend that I know what twists are coming on OUAT even more, since it's like Lost's lil' sister. I'm totally not buying this whole, "I'm your aunt" thing that Elizabeth Mitchell's Snow Queen is selling Elsa (which is about as believable as me trying to convince someone that I didn't buy an Olaf sweatshirt the other day). But even though I pride myself on my ability to predict what's next on this show, I did not see this one coming: Once Upon A Time's Snow Queen knows Emma — and Emma has no recollection of her. Whaaaaaat?

The way the Snow Queen's face lights up! We all saw that, right? She can barely struggle out a weak, "Emma?" The Snow Queen's excited to see her, as if seeing an old friend again. Emma, meanwhile, is way too focused on saving her sinking 'ship, Hook, to really pay attention to what the Snow Queen is saying. The Snow Queen disappears into the forest — oh, but then she comes across Rumple before the end of the episode. He completely confirms that the Snow Queen and Emma have met before. And even though the Snow Queen might have been surprised to see her, she doesn't want Emma to remember how they know each other. And just like I didn't see this one coming, I have no idea where it's going. This is not the face you make when you've said "good riddance" to someone. This is the face you make when you're shocked to see them alive, standing in front of you.

So how the heck does the Snow Queen know the savior? It makes my head hurt to try and think about Emma going back in time — again — to the Enchanted Forest to alter time — again — and run into the Snow Queen, so let's go ahead and cross that one off our list. I think that Snow Queen has been in the real world longer than anyone realizes, maybe ever since Emma came through the wardrobe portal. So... where has she been? And how did she come across Emma? And why doesn't Emma remember any of this?

THE SNOW QUEEN KNOWS EMMA FROM HER FOSTER DAYS

It's no secret that Emma was bounced around between foster homes a lot as a kid. Maybe the Snow Queen came across Emma during her time in the foster system at one point. Considering that Elsa currently has some foggy memories, it would be plausible that Snow Queen could have used the same magic on a young Emma. Maybe it was the Snow Queen who first tried to help Emma with her powers, and things went a little haywire. Quick wipe of the memories, and everyone is none the wiser. Emma gets sent off to another family, and the Snow Queen assumes she'll never see her once foster child again.

THE SNOW QUEEN KNOWS EMMA FROM HER TIME IN NYC

Am I the only one who still thinks the time jumps back and forth to New York were a little weird? I guess I'm someone who needs the rules of time travel within a show clearly spelled out for me — while it's worked for everything about the Enchanted Forest, NYC still doesn't make sense to me. It was like Emma and Henry were just inserted into this new life with rewritten memories, but what about everyone else in their new life? Were any of their memories rewritten?

I could very much see the show explaining that during that rewritten time, Emma and the Snow Queen met. Emma might not remember it because they're not technically her real memories — and the Snow Queen wants to keep it that way. So seeing her IRL is startling. I feel like we still haven't seen the last of the NYC days, and going that route might explain how the Snow Queen's been here the whole time, but we never heard about it until Season 4.

Call it what you want with Hook, but Emma is always going to love Neal. He left her because he loved her, and they were apart for 10 years. We don't really know what Neal was doing during that time, except that eventually he made his way to New York City. Could he have met the Snow Queen along the way? Better yet, could Emma and Neal have met the Snow Queen together? Once again, a little memory wipe, and neither one of them realizes what they've come across. Maybe the two of them pulled a con over the Snow Queen, and it pissed her off. But she takes a liking to the small-time criminals anyway. They help her do something, but it goes all wrong, and to protect their innocence, the Snow Queen erases what they remember. I also really want an excuse for Neal to come back, is that so much to ask?

OK, you know what OUAT, you've stumped me. This is like grasping at frozen straws. Whatever it is that went down between the Queen and the Savior, it was bad. So bad that — we can assume — the Snow Queen had Emma's memory wiped. After her talk with Rumple, it seems that she doesn't want Emma to remember what happened because that would also be bad. Considering how shocking it was to learn they already had history, the big reveal of their past together better be huge, or I'm going to be seriously let down. I'm just frustrated enough to make an I won't "let it go" pun.