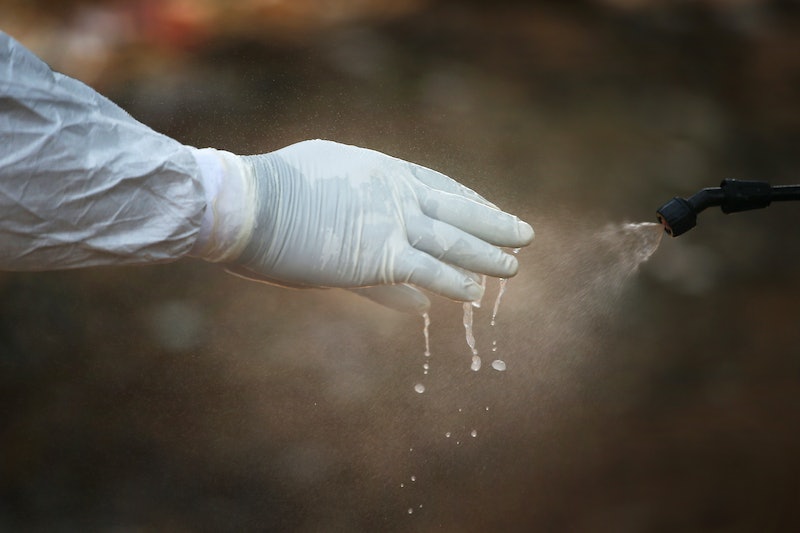 Since the Ebola virus infiltrated America, the conspiracy theories surrounding the deadly disease have gotten...wilder, to say the least. They've also been gaining traction, with everyone from anti-vaxxers to rapper Chris Brown tweeting insane Ebola conspiracy theories as if they were all writing for Infowars. And, of course, there was the lovely Ebola-Chan meme, a threatening meme circulated by 4chan users on Nigerian Internet message boards, because why not?

Are there any merit to these theories that Ebola was created by Western governments as a biological weapon and enacted as population control? No, of course not. Ebola is a very serious, highly contagious disease that has already killed more than 4,000 people and could kill thousands more before the end of the year. But that hasn't stopped people from trying to blame the government (naturally), or make a buck by peddling Ebola "natural biopreparedness" home health kits.

I guess we shouldn't be too surprised that Ebola conspiracy theories have taken hold. After all, during the H1N1 epidemic in 2009, right-wingers blamed the spread of the flu on President Barack Obama, calling it a socialist PR stunt to promote his health-care bill. It wasn't just ultra-right outliers saying that at the time; conservative radio personality Rush Limbaugh popularized the theory on his show, while Sen. Susan Collins (R-ME) went as far as calling the president "Typhoid Barry."

Those conjectures, however, have nothing on these crazed Ebola theories...

Hours after the Centers for Disease Control and Prevention confirmed Sunday that Dallas health-care worker Nina Pham contracted Ebola, Chris Brown tweeted that Ebola is being used as a "form of population control."

It sounds like he may be joking, but it's hard to tell — Brown seemed like he was defending his position, and right to believe in conspiracy theories, in his later tweets.

Ebola As Weapon Of Mass Destruction

Sounds perfect, doesn't it? Ebola isn't easily transmittable, unlike airborne viruses, but it's very contagious, moves quickly, and has an average death rate of 50 percent. What's a better way to take out your enemies than circulate a virus that spreads naturally among humans?

It sounds vicious and cruel, but there are people out there convinced Ebola was created, or is at least owned and distributed, by the U.S. government. As Info Wars writer Kurt Nimmo explains in a recent article:

For decades the United States military and its intelligence agencies have used the population as guinea pigs to test a variety of chemical, biological and radiological weapons. More details here.

The sanctity of human life is low on the priority list. The U.S. war machine has killed millions of innocent civilians, from Hiroshima and Nagasaki to the killing fields of Vietnam, Iraq and others scattered across dozens of third world countries, so “developing biological weapons from collecting monstrously lethal specimens of the Ebola virus should come as no surprise,” writes Joachim Hagopian.

This theory hinges on the fact that the U.S. government and the CDC have a patent on a new strain of the Ebola virus, filed in 2008. This strain is "an isolated Ebola virus" that was created in a lab — not the strain that's killing thousands in West Africa during the 2014 outbreak. The patent notes the strain is being used for Ebola vaccine and drug research, but that hasn't stopped people from claiming the U.S. wants to "profit" from Ebola. Right.

Ebola Is A Cover-Up For Autism

You can always trust the anti-vaxxers to up the crazy level. As i09 reports, an anti-vaxxer website called Child Health Safety just started spreading the theory that Ebola is being used to distract Americans from a paper published on the alleged connection between autism and vaccines. According to the website, now that there's an Ebola outbreak in the West, no one will talk about how the CDC allegedly knew vaccines caused autism, exposed in a new report from a questionable anti-vaxxer doctor (who is often in conflict with the CDC). The phrase "This isn't all about you" seems fitting here.

The Ebola outbreak is quite a coincidence – senior CDC scientist Dr Thompson has been talking with Dr Hooker for 10 months about the CDC knowing the MMR vaccine causes autism. The Ebola "problem" was introduced gently to the US public earlier in the year.

Now we have an Ebola "outbreak" in the west just when Hooker's paper has been published and the admissions about the CDC knowing the MMR vaccine causes Autism issue are breaking news which the mainstream media refuse to report.

There Is No Ebola

Here's the granddaddy of all Ebola conspiracy theories: There is no Ebola. It's not real, never was. At least, that's what the Vaccination Information Network reports in an article titled, "Ebola: Yet another fake pandemic set up to poison us with drugs and vaccines?" According to investigative journalist Jon Rappoport, people are sick and dying in West Africa because "people are always sick and dying. That doesn’t mean they’re Ebola cases." Except when they're all dying from the same disease, maybe?

In an edited interview with Vaccination Information Network, Rappoport hypothesizes that the CDC fabricated Ebola, because the CDC are dirty frauds who stop counting cases once epidemics are over, or something:

Q: Is the Ebola epidemic a fraud, in the same way that Swine Flu was a fraud?

A: In the summer of 2009, the CDC stopped counting cases of Swine Flu in the US.

A: Because lab tests on samples taken from likely and diagnosed Swine Flu cases showed no presence of the Swine Flu virus or any other kind of flu virus.

Q: So the CDC was caught with its pants down.

A: Around its ankles. It was claiming tens of thousands of Americans had Swine Flu, when that wasn’t the case at all. So why should we believe them now, when they say, “The patient was tested and he has Ebola.” The CDC is Fraud Central.

Q: Where is the fraud now, when it comes to counting Ebola cases and labeling people with the Ebola diagnosis?

A: The diagnostic tests being run on patients—the antibody and PCR tests are most frequently used—are utterly unreliable and useless.

Q: But people are sick and dying.

A: People are always sick and dying. You can find them anywhere you look. That doesn’t mean they’re Ebola cases.

There you have it: The CDC and World Health Organization are just labeling sick and dying people as "Ebola patients." Why? Because they can.