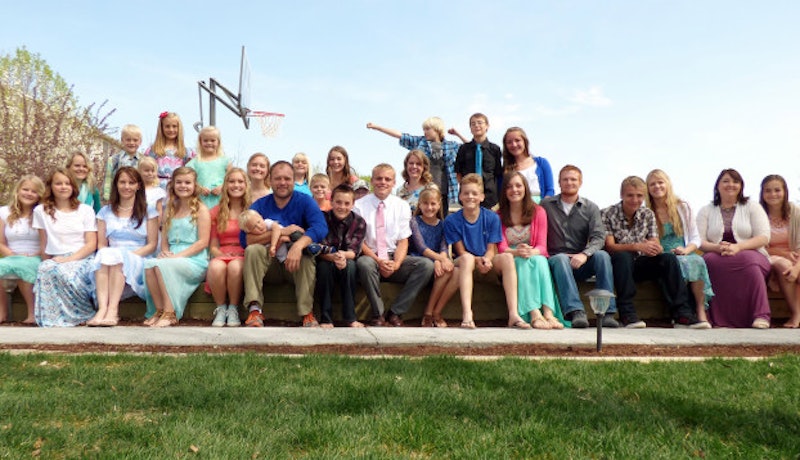 If you can believe it, the Williams family, stars of My Five Wives , actually have a bigger family than the Duggars, the TLC family that's literally shorthand for having a ton of kids. The Williams, between all five women, have 24 children... so far. But while the Duggars have a monogamous marriage, the Williams have a polygamous relationship where all 24 children are fathered by Brady Williams, but each wife raises the children that she gave birth to or adopted in a separate apartment. The Williams family live outside of Salt Lake City, where it is legal for them to participate in polygamous relationships because of a recent change in Utah's laws.

Even though the women prefer to keep things separate, and raise their children separately, everything is coordinated jointly in order for Brady to be a present father and because as "progressive polygamists," they believe in democratically making decisions rather than leaving everything to Brady. Throughout this season, the Williams wives will attempt to grow closer by going on double dates so the women can get to know one another better.

Since the family breaks down by wifely lines, it makes most sense to separate them that way. When you look at it like that, the 24 kids make sense — each woman has four to six kids, which is a much less shocking number. It's only when you consider that it's one enormous family with a single dad to go to every single baseball game or dance recital that it becomes intimidating.

Paulie is Brady's legal wife (if he was legally married to any of the other women, he would be a bigamist, which is against the law). They've been married for 22 years. She has six children — Karlie, Joshua, Madeline, September, Maura, and Camry, ranging in age from 11 to 21. Karlie, the oldest in the family, recently graduated from college and is in a relationship of her own, where she has decided that she would like to be monogamous.

Robyn and Brady have been together almost as long as Brady and Paulie have — just shy of 22 years. Her five children are Hannah, Lauren, Dane, Thomas, and Trey, also ranging in age from 11 to 21. Last season, she expressed longing for another child. So far it doesn't seem like she's pregnant… but we could be in for a surprise.

Rosemary's four children range from 12 to 19; Kimberly, Taylor, James, and Brandon. She's not focusing on having any more children at the moment, as she's pursuing her education in hopes of becoming a teacher.

This season, Brady and Nonie are trying to conceive their sixth baby, but are having trouble, after she was unable to pursue adoption last season. Her five children, Paul, Rachel, Marissa, Aeyden, and Tailee, are between five and 16.

Last season, Rhonda attempted to adopt a new baby, but wasn't able to complete the process, as she had to focus on her health instead. She currently has four children, Eden, Lake, Arwen, and Nikolas, between three and 14.

While I doubt you'll be able to keep track of all of those names, hopefully this can help you understand the Williams family a little bit better.