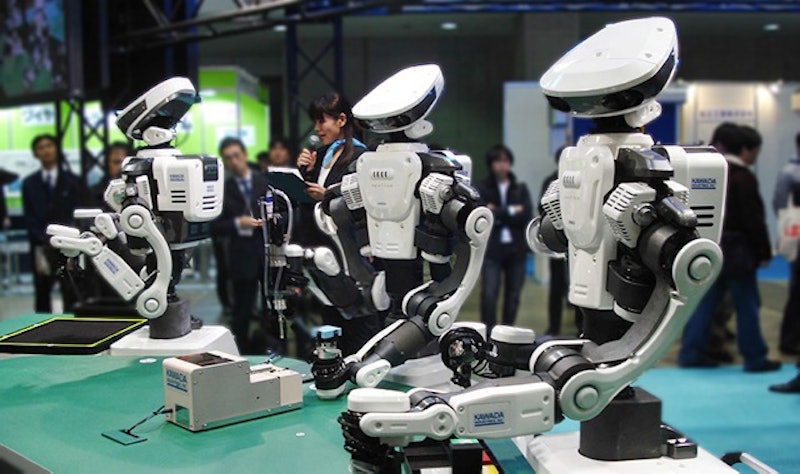 In "things that probably didn't need to be invented" news: there is now a robot called Nextage that can make your coffee. That is, if you consider the ability to make Nespresso "making coffee." Kawana Industry's robot premiered at this week's Japan Robot Week and underwhelmed attendees by making Nespressos for all.

Much like a stoned teenage barista, Nextage takes about three minutes to make a coffee, but the result is an instant coffee that you could have made yourself without leaving the house. Unlike your local holier-than-thou coffee snob, Nextage will not glare at you when you order a pumpkin spice latte. Nextage has no room to be smug when the only coffee it (he? she?) can make is a pod coffee.

Having Nextage make coffee for robot enthusiasts is compelling, but it's not just barista jobs that Kawanda is out to replace. With its arms that move deftly about the place, Nextage could do other jobs that mostly require limbs and the forethought to use them effectively. The good news for baristas — an occupation that many love and feel a deep passion for — is this: for now, robots suck at making coffee. But Nextage wasn't only designed with coffee-making in mind.

Liberates humans from menial repetitive labor, allowing us to focus on areas that require creativity and generate added value, such as process management and improvement activities.

Oh, so being a barista doesn't require creativity? Not the way Nextage makes it, it doesn't! Aaron Saenz for Singularity Hub writes that Kawanda have made their goals clear: their robots work side-by-side with their human colleagues. But do they plan to create new jobs for the thousands who do said "menial repetitive labor," whose jobs would be replaced by the robots? Does Kawanda plan to find more mentally fulfilling ways for former human employees to make money or spend their time? Not everyone can get a job as a process manager, whatever that even means. Some people are enthused, however, and the hype has been building since 2011.

At about $100,000 a pop, Nextage is too expensive to immediately replace workers, a fear many have voiced. It's unlikely that factory owners or the McDonald's Industrial Complex are going to replace all of their entry-level employees with robots, especially given how slowly Nextage makes a Nespresso. But Nextage, which takes up a little less space than a human, takes as much energy per hour as running a hairdryer. Over time, employing Nextage over humans could potentially cut human resources costs. And Nextage won't unionize or require maternity leave or accuse its boss of sexual harassment.

Luckily for baristas, Nextage isn't good enough to do this panda latte art that my local barista made for me:

Human baristas still have my vote.