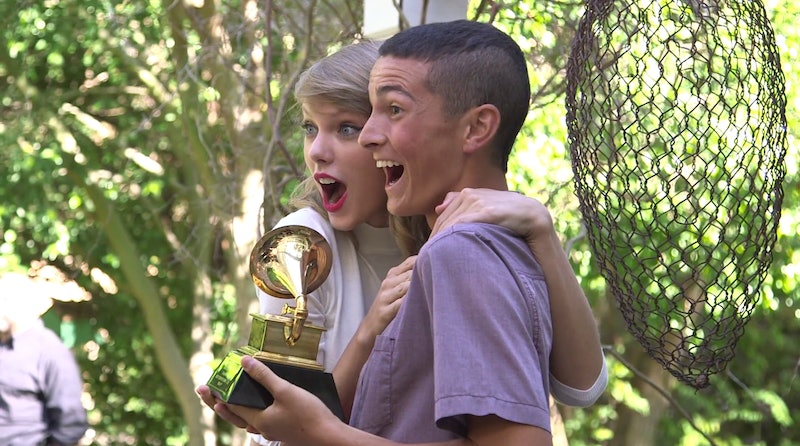 I want you to take a moment and think of how many of your favorite artists invited you over to their (mom's) house to make you cookies and let you listen to their album a month early. None? Why aren't you a Taylor Swift fan then? In the time before the release of Swift's new album 1989 on October 27, she's been having private listening parties for her fans. You've heard all the stories. You've watched all the flailing. But now you, too, can feel like you were invited to her house because Swift released a video of the 1989 Secret Sessions that gives everyone a behind-the-scenes look at all the greatness. But what happens at the secret sessions stays at the secret sessions.

As much as we might be able to guess what her fans would have (or should have) gotten up to at her house, it looks like the exact details of what happened at Casa de Swift is forevermore to remain a mystery — at least until we get lucky and fans get tired of trying to keep this all under wraps. However, if you're like me and would probably never have consented to going to a confidential location for a confidential bus ride to a confidential destination without believing firmly that I was about to be kidnapped by a dark villain who would use my love of Swift against me, then the video still leaves us some clues about what probably went down at those secret sessions. In fact, when you think about it, it's all really obvious.

They ate cookies that Swift herself prepared, in bulk, while wearing an apron.

They played with cats. In fact, they knew they were in the right place because someone was dressed like a cat.

They got a lot of hugs. A lot. No, seriously, a lot. Her arms must have gotten tired.

They took advantage of Swift's height for piggyback rides, which is what I do.

They probably took home souvenirs besides the free Polaroids. Like, I don't know, a pair of her shoes.

They got to hang out with Swift and left the rest of us to burn with envy.

They listened to the album, duh.

They got spied on.