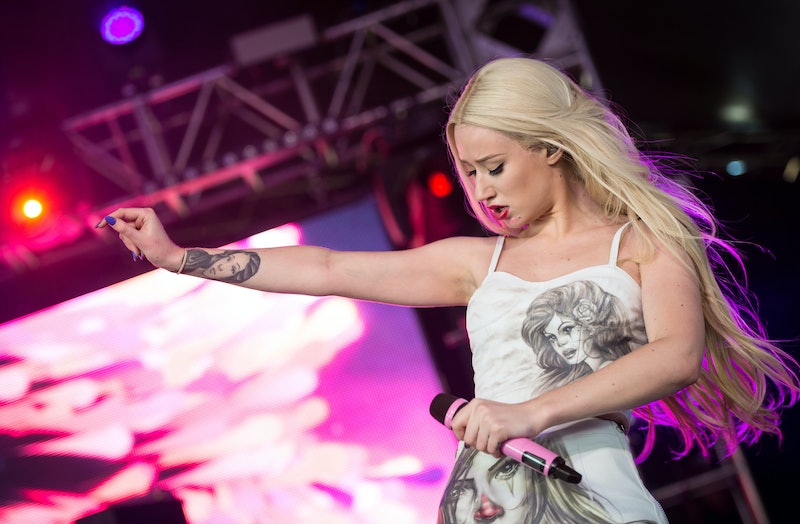 Iggy Azalea's career is on fire right now, but with more fame comes more drama, drama, drama. And Friday's issue? It's literally an issue... of a major men's magazine. Iggy Azalea hates her Maxim Hot 100 cover, which is for the Australian edition and features her lithe frame poured into a gold swimsuit. Why is the Aussie rapper so anti and so miffed about her hometown cover? It's a complicated, and as you'll find out, "Complex" issue.

Let's start out by remembering that Iggy Azalea has had a rough week, having engaged in a now-settled Twitter row with Snoop Dogg and been dealt with a divorce filing (even though she was never even married) in what felt like a case of a hanger-on looking to capitalize on her newfound fame. You'd think the fact that the "Fancy" rapper topped an international edition of Maxim and was christened the hawtest of 'em all would have positively thrilled her. But it didn't.

Azalea put her Aussie label staff on blast on Twitter for allowing a 2011 image of her to be used. Here's the cover, featuring Iggy in all of her red-lipped, cat-eyed, and alabaster-skinned glory. It was a proud moment for someone like me, who is so fair I'm practically an apparition, since Azalea wasn't all bronzered up.

It's worth noting that lots of international magazines use and purchase photos from other mag shoots for their covers. It's not an uncommon practice.

And though the photo of the singer, who is arguably the success story of 2014, is sexy, thanks to the Bond Girl look and the cutout high-on-the-hip gold swimsuit she is rocking, it's not current and it's not a bazillion percent flattering. She's got her thumb in her mouth and looks like a deer in the headlights. It's not a visual representation of the confident and majorly stylish rapper we've come to know. Still, it's by no means a ratchet image, either.

Azalea went nuclear about her Aussie label letting this happen and she fired off a bunch of since-deleted tweets, since she probably thought better of going so nuclear about a private, professional issue in such a public space.

According to Celebuzz, she posted:

Im going to publicly say something to the australian division of my record label right now because my message seems to be ignored privately…stop giving permission on my behalf for magazines to purchase images of me that have already been printed in major publications for covers…australian label, i love you guys but you allowed my image to be sold to cosmo Aus when i told you i would prefer for that not to happen…and now this morning i see you've allowed maxim australia to buy an image from a 2011 complex mag shoot and put it on the cover.

While at first, you might be going, "WTF? Why is she complaining? She just got a huge men's mag accolade," realize Iggy is not being an entitled brat. She also posted:

i think its awesome anyone would want me on the cover of a magazine, but theres a right way to make that happen and the australian label…clearly aren't respecting my wishes. a magazine cover deserves an accompanying photoshoot not a reused image…maxim australia, thanks for the love and I'm sorry no one asked me. i would have love to have given an interview & done a shoot with u guys.

Ah, so therein lies the problem. It's a repeat issue and the "Black Widow" songstress wanted to do an original shoot and feature for this huge cover. Who knows the backstory, though? Maybe the label PR department declined on Iggy's behalf without telling her. Maybe the mag proceeded with is cover and the anointing of the rapper as the hottest without asking her label for her participation. We don't know.

What we do know is this: Iggy Azalea should not sweat this cover, and here are four reasons why.

The mag does not hand this honor out like candy on Halloween.

2. She Has Bigger Concerns

Even though she and Snoop D-O-Double-G ceased their social media war, she still has that divorce-from-a-dude-she-never-swapped-vows-with thing hanging over her head. And then there was that pesky sex tape rumor.

3. The Picture Is Not That Bad

Her body looks cut from stone. Maybe it's not a flawless pic, since it was taken a while ago when she was less famous and therefore likely had way less control over or say in terms of the final images, but who cares! It makes jaws drop. She should consider it an occupational hazzard. Re-used images are just a byproduct of incredible fame even if they are a bit of a nuisance.

4. Someone Now Owes Her A Make Good

Either her label or the mag owes her a make good because of this, with another future cover or something else to smooth it over. So ultimately, like Charlie Sheen, she wins, since it's more publicity and press. End o' story, Iggz.