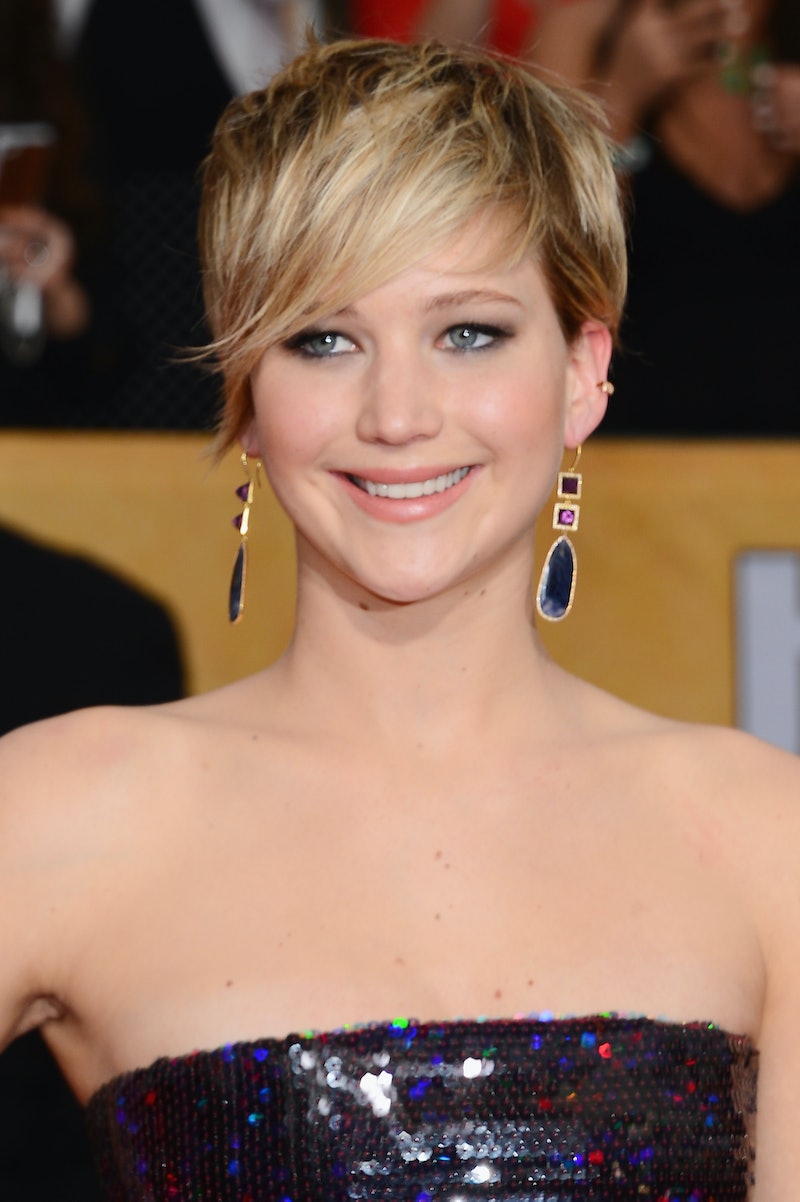 Yes, everyone, we are still living in a world where we have no real way of being sure that Jennifer Lawrence and Chris Martin are dating. We've seen them photographed in the same place at the same time by this point, but we still have no pictures of them together-together and neither one is rushing forward to talk about how much they like hanging out. However, the cat may be out of the bag with this latest clue: Lawrence is wearing Martin's Love Button pin, like she's Kim and he's Hugo and we're in Bye, Bye Birdie right now. Or like he's a member of the Love Button Movement and he got her into it and now they're both doing that. Whichever.

Listen, celebrities having or wearing matching items is my idea of the most convincing evidence ever their love is true and real and everlasting. No matter how many times I'm proven wrong by a breakup or a divorce, I continue to believe that. But this isn't the 1950s anymore. Nowadays, you need to have matching items a lot more convincing than just a charity pin to get me to believe that your love is real. When Lawrence and Martin match the following seven things, then I'll start planning the wedding.

Everybody knows you're not really official until you've accepted each other as boyfriend and girlfriend on Facebook. I don't know if Lawrence or Martin are on the site, but if they are, then they have to be Facebook official or it doesn't count.

Unlike a Facebook status update, matching necklaces cost money. However, they're even more noticeable than a pin. They say "I specifically went out and bought you, or bought myself, a necklace that you or I have already been seen in public wearing." They're a commitment.

Custom-made matching jackets are like wearing the same shirt, except they require more money and effort and commitment. That's probably why more celebrity couples aren't doing this.

The months of planning! The sewing! The fitting! The customization! The photo op! Having matching costumes on Halloween is like one step away from being married, as far as I'm concerned. They'll never beat Harris and Burtka, but Lawrence seems like she'd be the type to get super into this.

I'm not saying that I won't take Lawrence and Martin's relationship seriously until they're married, but I am saying that I would find matching rings a lot more convincing than matching Love Button Movement pins. Even if they're not wedding rings.

You'd think that getting married would be the absolute convincer of commitment to me, but, nope, it's tattoos. A marriage you can get annulled or apply for a divorce, but a tattoo is forever. I'm not going through twice the pain to remove your name from my body as I did to put it on in the first place, okay? When Lawrence and Martin get matching tattoos, their love will last forever.