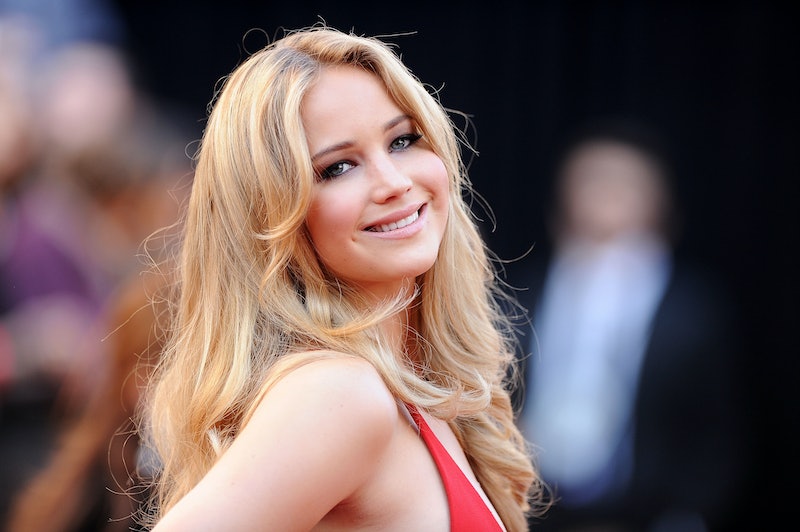 I won't deny that concert tickets are a pretty good gift from a boyfriend, but lately it seems that Jennifer Lawrence and Chris Martin's whole relationship has been about her attending his concerts. On Friday J. Law was spotted at the Kings of Leon concert to see Chris Martin's guest performance. But that's not the only musical venue she's been to of late. She supposedly went to a Coldplay concert in September, (although there's no photographic evidence of that) and she supported Martin at the iHeart Radio Music Festival a couple of weeks ago.

These days it seems the only time she's spotted in public, she's cheering Martin on. I totally get that he's a musician and this is his life, but J. Law should get treated to a public date or two that doesn't have to do with her BF's music. At the beginning of their relationship things seemed so promising with dinner dates and romantic trips to the vineyard. But lately it seems like the pair has fallen into a rut, something you never want to have happen to a budding romance.

But that's OK because being the matchmaker that I am, I have some date ideas for Martin and Lawrence to try out and keep the spark alive.

HE COULD SUPPORT HER FOR A CHANGE

It's cute that J. Law has been there for him, but it should be the same for her. She's about to have to start a round of Mockingjay promotion, perhaps he can accompany her to talk show tapings and film premieres. A supportive couple is a happy couple, but only if both parties feel uplifted.

A TRIP TO THE ZOO OR PARK WITH THE KIDS

According to sources, the couple is already at the meeting his kids stage, so it would be cute for the group to head to a family-friendly date like a day in the park or a zoo jaunt.

If there's one thing we know about Jennifer Lawrence, it's that she likes to eat (and is basically always starving). Martin doesn't even have to take her somewhere fancy. Girl likes french fries just as much as a gourmet meal.

DINNER DATE WITH THE FRIENDS

Have they met each other's friends yet? Maybe, but not publicly. Let's see her and Josh Hutcherson and the rest of Coldplay at the same table sharing a bottle of wine and being hilarious, please.

J. Law is like the biggest kid ever, so she'd love the Happiest Place on Earth.

J. Law is a self-described KUWTK lover. Now it's about time she met the fam IRL. Also I can just see her and Khloe becoming BFFs with their mutual levels of inappropriateness.

SITTING IN ON A REALITY TV TAPING

Lawrence loves reality TV from the Kardashians to Dance Moms, so she should totally be at one of those live tapings of like the Dance Moms reunion or The Bachelor After the Final Rose. She and Martin can give their opinion on the show's hot button issues and be generally adorable together and on tape.

ATTEND A CONCERT TOGETHER

Hey, they don't have to retire the concert date forever, but how about if they go together? It could be nice for Lawrence to have her date by her side instead of onstage. Shaking things up a little in their relationship could be a good thing.