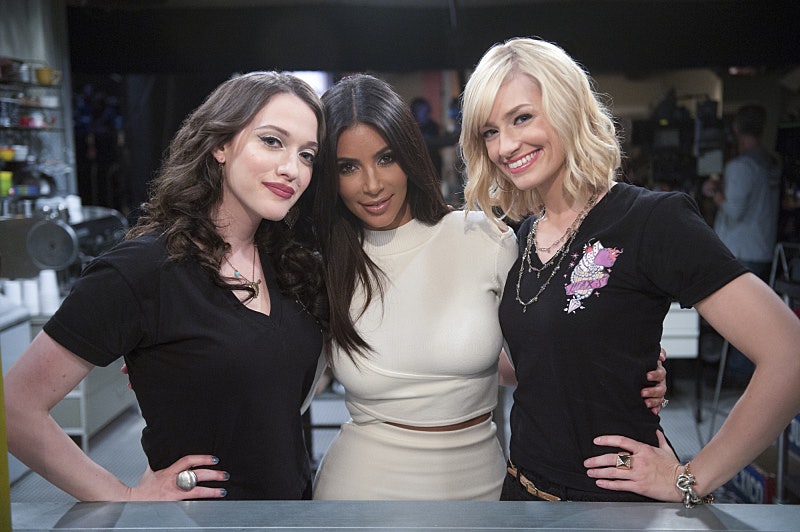 I don't know about you, but what I really think we need more of in our lives are Keeping Up With The Kardashians crossover episodes with primetime comedy series. I bet you never thought of that, right? Well, thankfully, CBS thought of it for you — Kim Kardashian will guest star in the 2 Broke Girls Season 4 premiere where she'll play herself. I mean, of course, because Kim's already shown how great and comedically brilliant she can be while just being plain, old Kim Kardashian. And this could potentially be the greatest crossover ever conceived.

On Wednesday, CBS released two photos from Kim's foray into primetime comedy on their site and a description of her upcoming episode, titled "And The Reality Problem," that'll air on Oct. 27. According to the accompanying synopsis, a reality TV producer will approach Max and Caroline about shooting an episode of Keeping Up With The Kardashians at their cupcake window. Doesn't that sound just brilliant? Even if Kim recently swore-off carbs as a part of her latest diet and exercise regime. (Which she totally doesn't need to, by the way. Treat yo'self, girl.)

Diets aside, this crossover has potential or, at the very least, potential for the North West cameo that we desperately need. So, with that being said, here's what a dream KUWTK-2 Broke Girls episode should include, because I just can't help myself.

We already know that North is approximately the most spoiled baby alive. So why wouldn't Kimye throw her a half-birthday party?

I don't want to throw Khloe under the bus, but I'm still a little pissed at her for trying to throw a wrench in Kim's wedding day. And considering how rude she was to Kendall about her body, I could see Khloe being all like, "Kim, are you sure you want to be eating that?" Stop projecting, Khloe. It's mean.

Thank god for the Kardashian voice of reason. Also, any reason to hear Kourtney call someone "so rude" is a good one.

Why did Kim even invite him? Everyone knows that Brody always bails without any warning. He just pretends he doesn't see that his family has called him 100 times in a row and then makes an excuse like, "I was asleep." She should've invited Bruce instead.

Then Reveals Kris Wasn't Invited Because She's Too Judgmental

Inevitably, someone will ask why Kris didn't want to come taste cupcakes for North, at which point Kim will have to tell everyone that Kris just wasn't invited. This is a #nojudgment zone.