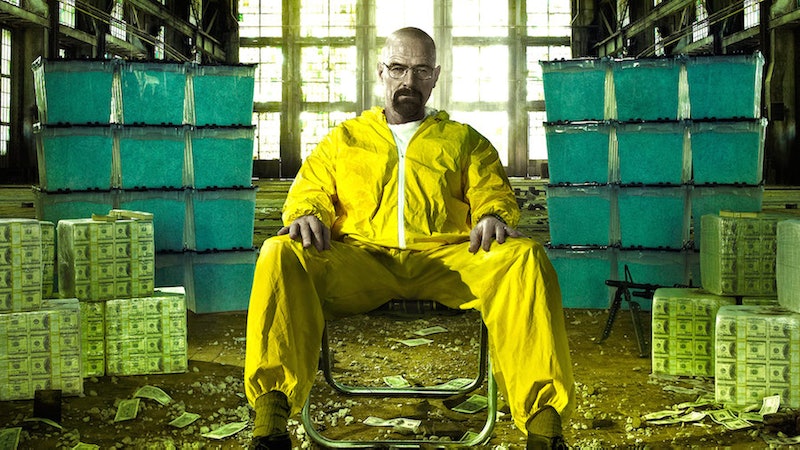 While I'm usually the one saying that some parents can be a tad too quick to overreact in situations like this, I gotta say — this time, the parent isn't wrong. According to a local Fox affiliate in Fort Myers, Florida, one mother is urging Toys "R" Us to take stop selling Breaking Bad action figures with children's toys, because it's sending kids the wrong message about, you know, not growing up to be drug kingpins who produce and sell meth.

By the looks of the toys, in Toys "R" Us' defense, they look more like they're geared toward adults who actually watch the show rather than kids who (I would hope) have no clue who Walter White, Jesse Pinkman, and Hank Schrader are. I mean, it's easy to see that by just looking at the website: Not only does Mezco Toys produce Breaking Bad action figures, but it also has toys for the equally kid un-friendly show Sons of Anarchy, and the horror movie Chucky.

But still — it's strange that Toys "R" Us, a store specifically dedicated to selling children's toys, would carry something like that, all for the low, low sale price of $13.99. So, I can really see where this mom is coming from when she incredulously asks, "It’s about drugs, you’re selling it in a children’s toy store?"

Since Toys "R" Us doesn't seem to have responded to this concerned parents' complaints, perhaps they still need more convincing. Maybe they've never seen Breaking Bad! Unlikely, but possible. In the event that that's the case, perhaps a list of all of the other reasons that Breaking Bad is an unsuitable show for kids would help persuade them:

I feel like the only kid-friendly parts of Breaking Bad are the ones involving breakfast food. If Toys "R" Us wanted to sell a Walt Jr.-with-a-plate-of-bacon-and-eggs action figure, that'd probably be OK.