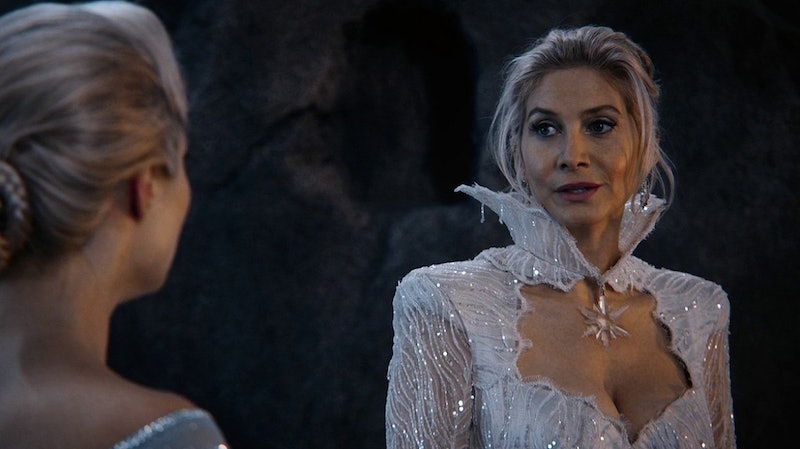 Have you starting placing your bets yet on who the Snow Queen really is on Once Upon A Time Season 4? During last Sunday's episode, OUAT revealed some major intel on who Elizabeth Mitchell's icy character is, where she came from, and who she already knows in Storybrooke. And, naturally, absolutely none of it made sense. Apparently, The Snow Queen knows Emma, but the only person who knows exactly how is Rumplestiltskin. Because how could OUAT introduce a new character if she didn't know at least two characters that she shouldn't, right? So, how do The Snow Queen and Rumple know one another? They definitely go way back.

I'll admit it, it was hard for me to not resolve to never watch OUAT again during Sunday night's episode, "Rocky Road," when the show started doing its typical "everyone here knows everyone" schtick. But any good OUAT fan knows that if you don't make that promise to yourself at least three times during the season, the series is obviously doing something wrong. So, I had my moment — around the moment where the Snow Queen recognized Emma, was shocked, and then tried to play it off — and then forged onward thinking, "It can't possibly get anymore interconnected, right?" WRONG. SO WRONG.

Because the Snow Queen also knows Rumplestiltskin, and apparently they've got some type of agreement that he plans to blackmail her with in typical Rumple fashion. In the final moments of Sunday night's episode, Rumplestiltskin and the Snow Queen had a little conversation where he threatened to tell Emma how the two women know one another. But here's my big question — how do Rumple and The Snow Queen know each other well enough to be connected on this level? It definitely has something to do with this urn situation.

I feel like it was so long ago that Elsa came pouring out of the magical urn that, according to the Snow Queen, is the only true imprisonment for "their people." But she did, in fact, come out of that urn, which happened to be sitting on a shelf in Rumple's creepy storage room. How did it get there? Considering OUAT revealed on Sunday night that the urn previously imprisoned the Snow Queen in a very different part of the magical world, this must be where Rumple and the Snow Queen's relationship begins.

Personally, I have a sneaking suspicion that the Snow Queen might be lying about being Elsa's aunt. She could be no one to her or her real mother, but there's just no way that she's randomly Elsa's aunt. We should all be following our gut instinct with our assessment of the Snow Queen and mine is that she's threatened by Elsa or, at least, she was threatened by Elsa. So she struck up a deal with Rumple to eliminate Elsa from the equation — the Snow Queen accompanied Elsa to return Anna home from wherever she ended up after seeking out answers about their parents, that lead Elsa into a trap set by The Dark One to be imprisoned in the urn.

But why would she do this? Let's look at the biggest thing we learned about the Snow Queen on Sunday — she believes that regular people fear her and Elsa's powers and that they should be together. I can't imagine that the Snow Queen would be all too happy that Elsa would rather focus on finding Anna than getting to know her "long, lost aunt." It seems like the Snow Queen wouldn't understand why Elsa would feel this deep devotion to people that weren't like them and become incredibly jealous. Jealous enough to strike up a deal with Rumple to imprison Elsa. That would, at the very least, explain why the urn was in Rumple's castle and how it ended up arriving in Storybrooke.

I don't find it hard to believe that the Snow Queen and Rumple would meet and get to know each other this way. They're both extremely manipulative, and you know what they say — birds of a feather flock together, even in fairytales.