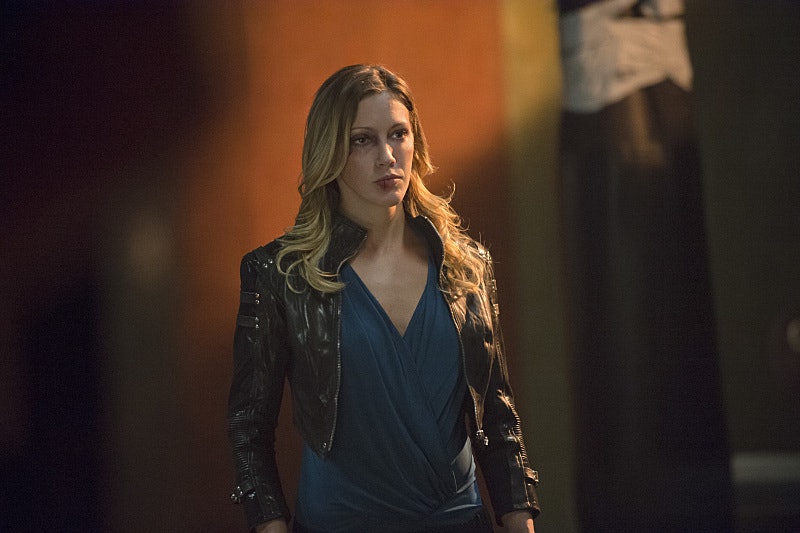 As viewers, we've known since the very beginning that on Arrow, Laurel Lance would likely become the Black Canary — I mean, the story's already written in the comics for Dinah Laurel Lance, The CW's Laurel just goes by her middle name. It was only a matter of when it would happen. Season 1 hinted at it a bit, but not enough to convince fans it would happen by the end of the season. Laurel was more of a crime fighter with CNRI than an actual masked vigilante. Then Season 2 rolled around and suddenly there actually was a Black Canary, just not Laurel. Black Canary was the alter ego of her little sister, Sara Lance, who sadly met her fate in the Arrow season 3 premiere. It's hitting Laurel hard. We've seen her turn to alcohol and drugs after the death of Tommy Merlyn, so how will she cope with the death of another person she loves? Crime fighting, it seems. But if Laurel is suiting up to become Black Canary, she's going to need some help, and it looks like there's already someone waiting in the wings to train her.

The warning signs for Sara's death were there, I guess we all just chose to politely ignore them because Team Arrow wouldn't do that to us, would they? They would. Oliver knows Laurel is out for some serious revenge, which is why he won't be the one to train her in his vigilante ways. He knows what that kind of anger can do to a person, and at the end of the day he's still pretty intent on keeping Laurel safe. So who's going to step up to the plate and train her?

This summer J. R. Ramierz was cast as Ted "Wildcat" Grant. In the comics, he's a known member of the Justice League, and the guy who's a mentor for other vigilantes. On the show, he'll run a gym for underprivileged kids, and from the promo pictures released it looks like he'll do it sans shirt (big rousing, thank you!).

The thing about Laurel's quest for justice is that it's going to lead her down a dark path. She's out for blood — literally. I'm not suggesting that she's going to fully turn to the Dark Side, but I doubt she'll start off as Black Canary 2.0. From what we know about how she's feeling, she'll probably be more like a Huntress 2.0 more than anything else. Vengeful? Spiteful? Mad at everyone? Yes to all. Just like Helena was way back when (and probably still just like Helena, whatever her current whereabouts are). In the season premiere, Laurel twisted, and probably even further broke, a guy's arm while she was visiting him in the hospital trying to get answers. She grabbed one of Oliver's Arrow guns. She wants justice for her sister, and it doesn't look like she's going to let anyone stop her — even if Oliver can talk her out of it for the time being.

So even though we'll see her slowly start putting the pieces together to become Canary, it's doubtful that she'll make the jump before the end of the season. Her path towards the character really happened at the end of last season, when she picked up Oliver's bow and arrow for the first time. Then she got Sara's crime-fighting leather jacket. Now, with the proper training it'll just be another step in the right direction for full-fledged Canary. But we've been waiting for this since Season 1, another few episodes can't hurt.