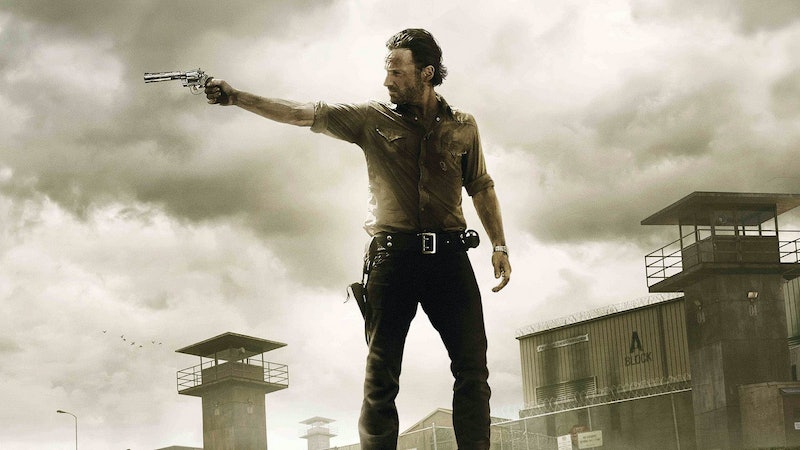 If you've ever found yourself watching The Walking Dead and thought, "Hey, this show isn't nearly as violent as I'd like, so can we get a baseball bat-wielding, ruthless lunatic named Negan to destroy all the hope of a defenseless group of zombie-fearing people somewhere?" Then first of all, I would reply, "Wow, that is an oddly specific request," and secondly, I would assume that you were probably losing your sh*t during the Season 5 premiere (along with everyone else) when a potential Negan easter egg was unveiled during the closing "Then" sequence. After Terminus' HBIC Mary was unceremoniously tossed into a train car with the rest of the Termites, her hulking rapist captor leaned in to assure them that things were "not" going to be OK. Was this Negan? Has he finally arrived?! Will Negan be on Walking Dead Season 5? Sorry, but no.

While fans of The Walking Dead graphic novel have been eagerly awaiting antagonist Negan (who first appears in the 100th issue of the comics and leads a group called the Saviors) his suspected spotting in Terminus was a fluke. Although the guy definitely had the raspy voice and menacing persona associated with Negan, the dimly lit scene hid one key fact: His face was covered in tattoos. Who was he, then? Turns out, it was just the guy Glenn insisted on freeing from one of the train cars in the midst of the zombie attack.

Anyone who read the comics can attest that although he's pretty awful, the rape aspect of that scene just wouldn't have jived with Negan — he once told a Savior that one of their main rules was, "We don't rape." On top of that, Walking Dead creator Robert Kirkman further confirmed the fact and shut down the fan hubbub with a tweet:

While Negan's whereabouts are still unknown, clues have popped up about him in the past. In an interview with Entertainment Weekly in December 2013, Kirkman discussed wanting to give the show breathing room in between the Governor and Negan, so you shouldn't expect to see him hangin' with Rick and co. anytime soon.

I definitely do think there needs to be some kind of space from a Governor into a Negan. You have to have something of a break in there. So I wouldn’t expect him to be showing up — definitely not in Season 4. I don’t know. I wouldn’t expect it too soon. But we are all very excited about the prospect of bringing that guy into the show. The plan is that we will see him eventually.

Rumors were also swirling earlier this year that The Strain actor Kevin Durand claimed to have been approached by the zombie drama to play Negan (which would be an A+ casting choice, IMHO) but he later denied it on Twitter. Bummer.

All hope is not lost, however, because Walking Dead showrunner Scott Gimple appeared on The Talking Dead with executive producer Greg Nicotero, and although neither directly addressed fan speculation over Negan, Gimple promised that the coming episodes will hold "new threats." I can definitely see this all leading up to an epic Season 5 finale where Negan is finally revealed, but until then, are we going to get a storyline with the Hunters? Maybe some Alexandria Safe Zone drama? Regardless, it's clear that The Walking Dead has us right back where it wants us: on the edge of our seats.