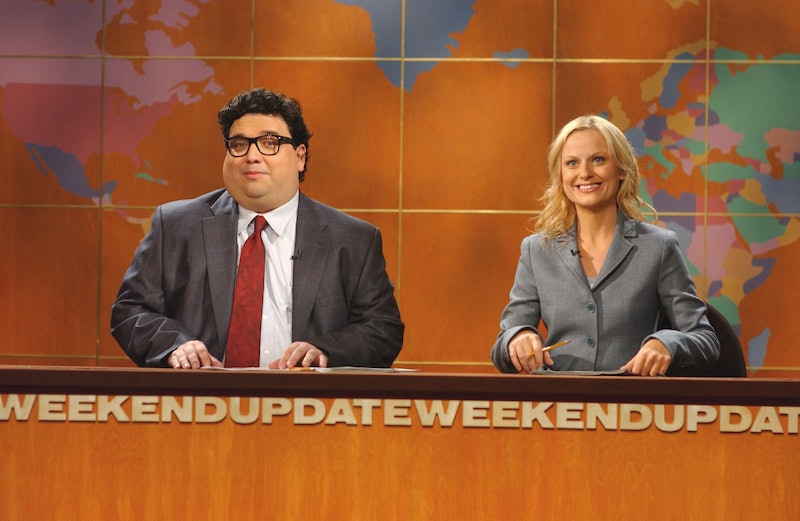 There are a lot of roles for which we know and love Amy Poehler — Leslie Knope on Parks and Recreation, Colby in the Upright Citizens Brigade, Mrs. George aka "the cool mom" in Mean Girls — but it was Poehler's 7-year stint on Saturday Night Live that really brought her into our homes and hearts. From 2001 to 2008, Poehler carried the torch for such female SNL legends as Gilda Radner, Jan Hooks and Molly Shannon, before passing it on to today's comic leading ladies like Kristen Wiig and Cecily Strong.

SNL was a huge part of Poehler's career and life, and as such, gets its appropriate due in the pages of her new book, Yes Please. References to Poehler’s SNL days are sprinkled throughout the book, but the chapter devoted to that period of her career — which may also be the best-titled chapter in the book, “Humping Justin Timberlake” (more on that in a moment) — dishes up tons of behind-the-scenes goodies from Studio 8H.

Reading about what was going on in the writers’ room, offices, and rehearsal spaces while classic sketches and characters like “Bronx Beat” and Kaitlin were being developed made me want to go back and re-watch all of Poehler’s best moments. In case you do to, here is a handy compilation of Poehler’s standout SNL moments:

When Seth Meyers, Poehler's Weekend Update co-anchor and close friend (who pens a chapter in Yes Please), departed SNL earlier this year for Late Night, he recalled this Weekend Update bit as his favorite moment from the show. It's easy to understand why. Poehler proves what a legit badass she is, rapping alongside Eskimos, a moose, and Vice President candidate Sarah Palin while nine months pregnant. In fact, this was the last show Poehler appeared in before giving birth to her son exactly one week later. Makes you feel kind of guilty for not being able to drag your non-pregnant ass out of bed to make coffee and sit in front of a computer all day, doesn't it? We're not worthy, Amy, we're not worthy.

The thing about watching this sketch six years later is that it's not as funny as you remember it. It's funnier. Watching Poehler as Hillary Clinton and Tina Fey (who also gave her own behind-the-scenes take on the sketch in her book Bossypants) as Sarah Palin is nothing short of genius. Poehler and Fey, who refer to each other as "comedy wives," honed their chemistry as members of the Second City improv group and as the first female co-anchors of Weekend Update, and it is firing on all cylinders here as they take on 2008's best political odd couple.

One of the most exciting things about live performance is the possibility that it will turn into a total train wreck. That's pretty much what happened during this sketch, the first appearance of Rachel Dratch's queen buzzkill Debbie Downer. Allegedly, no one told the cast about the "wah wah" sad trombone sound that would accompany Debbie's cringe-worth one-liners ("By the way, it's official ... I can't have children."), and it sent the cast into a downward (or maybe upward?) spiral of fighting back laughter and hysterical tears. Add in a pre-sex list Lindsay Lohan, and you've got the makings of truly epic live entertainment.

Like with Fey, put Poehler in a room with Maya Rudolph, and magic happens. As gum-chewing, hairspray-loving Bronx housewives Jodi and Betty, Poehler and Rudolph took the cable access show format that worked so well for Mike Myers and Dana Carvey in the early '90s, and reinvented it for our Real Housewives of Wherever-obsessed times. Fun fact: In Yes Please, Poehler reveals the characters were named after two hairdressers at SNL, Jodi Mancuso and Betty Rogers.

In Yes Please, Poehler describes Kaitlin, one of her most popular recurring characters, as a "hyperactive girl with a heart of gold" that is an homage to "The Judy Miller Show," a sketch by original SNL cast member Gilda Radner (which, if you've never seen, you're welcome). Watching Poehler bounce and prance, it's easy to believe that Gilda is watching from beyond with a smile on her face.

The sketch that gave Poehler her chapter title was actually inspired by a real incident. She writes, "[Timberlake] was hosting and came into the office one writing night. We [Poehler and writer Emily Spivey] both got very flummoxed, and it caused us to write a scene where I was attempting to give him notes backstage during a show." Nothing like a little 2003 JT to get those creative juices flowing, amirite?

Reading about Poehler's angsty teen years in '80s makes this sketch ring truer and made me laugh louder. Fun fact: the set is modeled after her actual teenage bedroom, and the costume Jon Bon Jovi wears is an actual costume from Bon Jovi's "Slippery When Wet" tour in the 1980s. Poehler certainly has all the luck when it comes to her scene co-stars.

Poehler's first cold open almost didn't happen — it was actually supposed to be host Britney Spears who was "skiing" down the mountain while being solicited by Mormons Will Ferrell and Dan Aykroyd (who, for the record, Poehler only vaguely recalls being in the scene).

The same night Poehler pulled off her Palin Rap, she also gave us this gem, swinging her baby belly and looking damn sexy while she's at it.