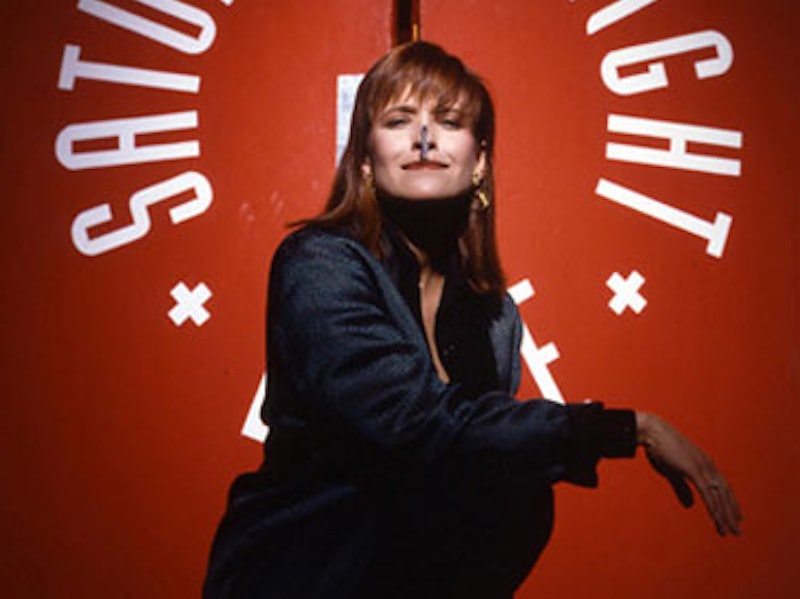 When someone thinks of Saturday Night Live in the late '80s and early '90s, they think of Dana Carvey. Phil Hartman. Adam Sandler. Chris Farley. Mike Myers. Heck, even Alec Baldwin, who wasn't even part of the cast. But few people recall one of the sketch comedy show's greatest stars from the era, a woman whose work makes up some of the best in the SNL canon. In fact, after hearing that Jan Hooks had passed away at just 57 years old, I frantically IM-ed friends with the sad news, and was only met with, "Who's that?" But everyone should know who Jan Hooks is. Because without the comedienne, we wouldn't have Molly Shannon. Tina Fey. Amy Poehler. Or anyone else who has broken through SNL's infamous boy's club barriers.

Interestingly, though, Hooks became an SNL star by being the best type of comedienne, the team player. Which is precisely why she never got the attention she deserved. While Myers created a movie character joking about boners in "Wayne's World" sketches, Hooks propped up a Frank Sinatra roundtable spot with an impeccable Sinead O'Connor impression. While Dana Carvey transformed himself into every presidential candidate of the early '90s, Hooks made audiences laugh out loud with her own news-makers, like Tammy Faye Bakker. (And I'll take a second to pause here and present you with that latter sketch here, a must-see for anyone who has ever liked humor ever.) Hooks was so versatile — playing anything from the straight-woman to a looney lounge singer — that she was recruited to help make every sketch better. But she was barely recruited to be the star of a sketch.

Nobody does sketch like Jan Hooks, but Jan Hooks was not the star of the show.

She's right on both counts. Nobody did a sketch like Jan Hooks. And, sadly, she was not the star of Saturday Night Live. That's not to say she didn't have the right to be the star of Saturday Night Live. Caponera also noted that comediennes like Shannon and Cheri Oteri, unlike Hooks, had an advantage in the late '90s — the sheer number of women who entered Studio 8H's doors created a "level playing field." "Everyone was in the position to make change," she told The New Yorker. Hooks, on the other hand, still operated in an SNL environment dominated by men. When she joined the cast in 1986, SNL featured just three women in its cast of nine. By 1991, Hooks' last year on the show, that number was three of 16.

Still, she broke through in her own way. Like Gilda Radner before her, she created memorable characters (at least, memorable to SNL devotees) and rocked impressions that managed to be relevant years later. (Hey there, Kathie Lee Gifford!) But, most importantly, she proved herself essential on SNL during a time when women were thought to be unfunny set pieces. She might not have been able to out-fame the boys, but she fit in with the boys. And her ability to break out as O'Connor — and especially in the two-woman Sweeney Sisters act — helped pave the way for the late '90s and early 2000s female Renaissance. Yes, women were funny, and damned if Hooks' Diane Sawyer didn't help the close-minded comedy scene and audience realize it.

But Hooks still goes unrecognized, even though she's one large reason why Saturday Night Live survived the headache that was the mid-80s era on the sketch comedy show. Even Bill Hader (whose SNL career largely mimics Hooks' time on the show) recognized how little Hooks is credited in SNL's history just last month. No, we never talked about Hooks enough, and it's tragic that it takes her death for us to appreciate everything she did for not only comedy, but for women as well.

She might not have been the member of SNL's boys club, but it's time we recognize — and learn — about one of the girl's club's founding members. Starting here: