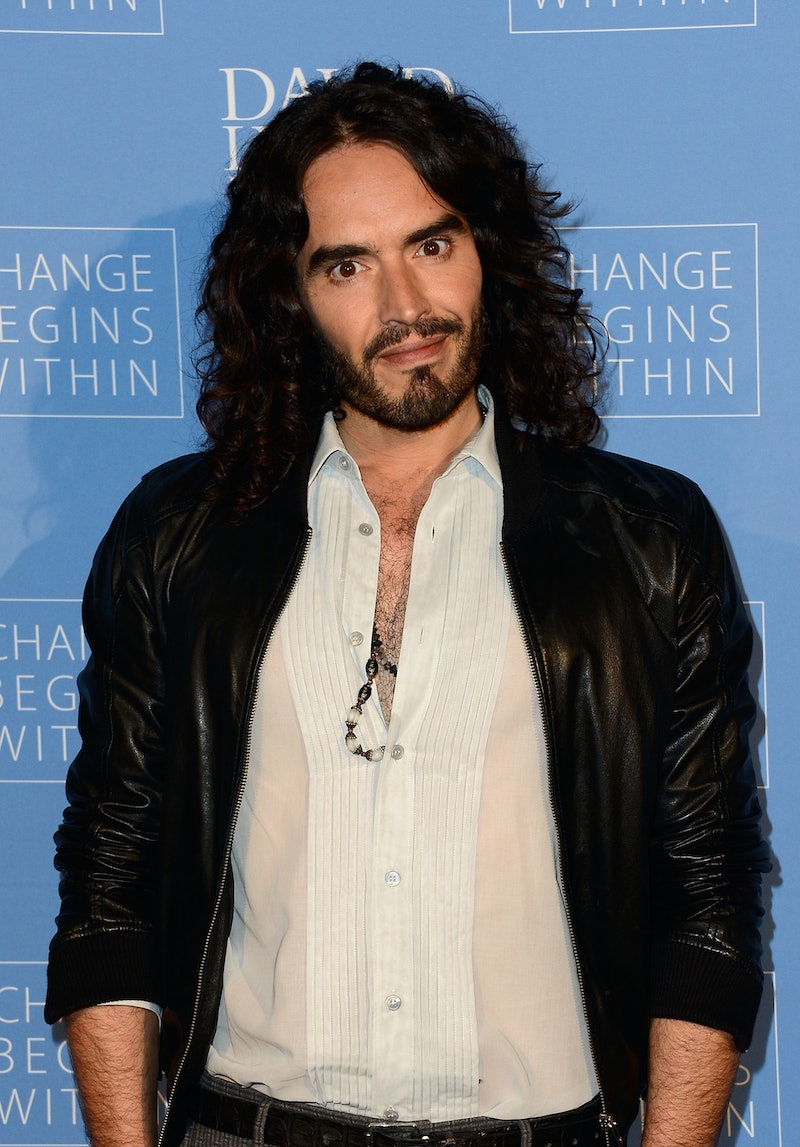 I've never been much of a fan of Russell Brand, especially after he broke Katy Perry's heart. However, if he's going to pit himself against Fox News? I might just become a fan. As it turns out, Brand is also not a huge fan of Fox News, who tends to sensationalize serious news issues like the spread of Ebola to the point of terrifying their audiences, and after what happened outside their studio this week, it's safe to say he likes them even less. Brand was invited to make an appearance on The Sean Hannity Show, but his visit got cancelled... so, naturally, an undeterred Brand showed up at Fox News' NYC headquarters anyway, ready to film an edition of his own webcast, The Trews, which is where all hell broke loose.

After pointing out their Islamaphobia in reporting on the Gaza conflict, Brand was asked to leave — and managed to capture the whole thing on film. A man in a business suit who presumably works at Fox approached him, saying, "You can't film here. This is private property." Did Brand quietly slink away, regardless of whether or not the sidewalk in front of the building actually was private property? Of course not.

And although he was threatened with arrest, Brand went inside, introduced himself as "Russell Brand from True News" and asked for a tour. Unsurprisingly, he was denied... and eventually, Brand decided it was time to pack up and leave, because nobody was letting him anywhere near Sean Hannity.

"Whether the subject is Islamaphobia or just the freedom to be in a lobby, Fox News is a difficult organization to work with," Brand said. "Whether it's canceling bookings for the Hannity show, or kicking you out of their property which they claim is owned by Beacon Management, it's very difficult to have true freedom. We'll run this building one day."

All in all, Brand was harmless and way less confrontational than I would've expected, but his presence was obviously pretty intimidating and I'm not surprised he was asked to leave. Did he accomplish his mission to make Fox's day a little harder because they canceled his appearance? Yeah, that mission was a success... even though he was a bit obnoxious in the process.

Brand, I'm still mad at you for the whole Katy Perry debacle, and I probably always will be, because I'm a Perry devotee for life. But where politics are concerned? I'll be on your side against Fox News just about any day of the week.