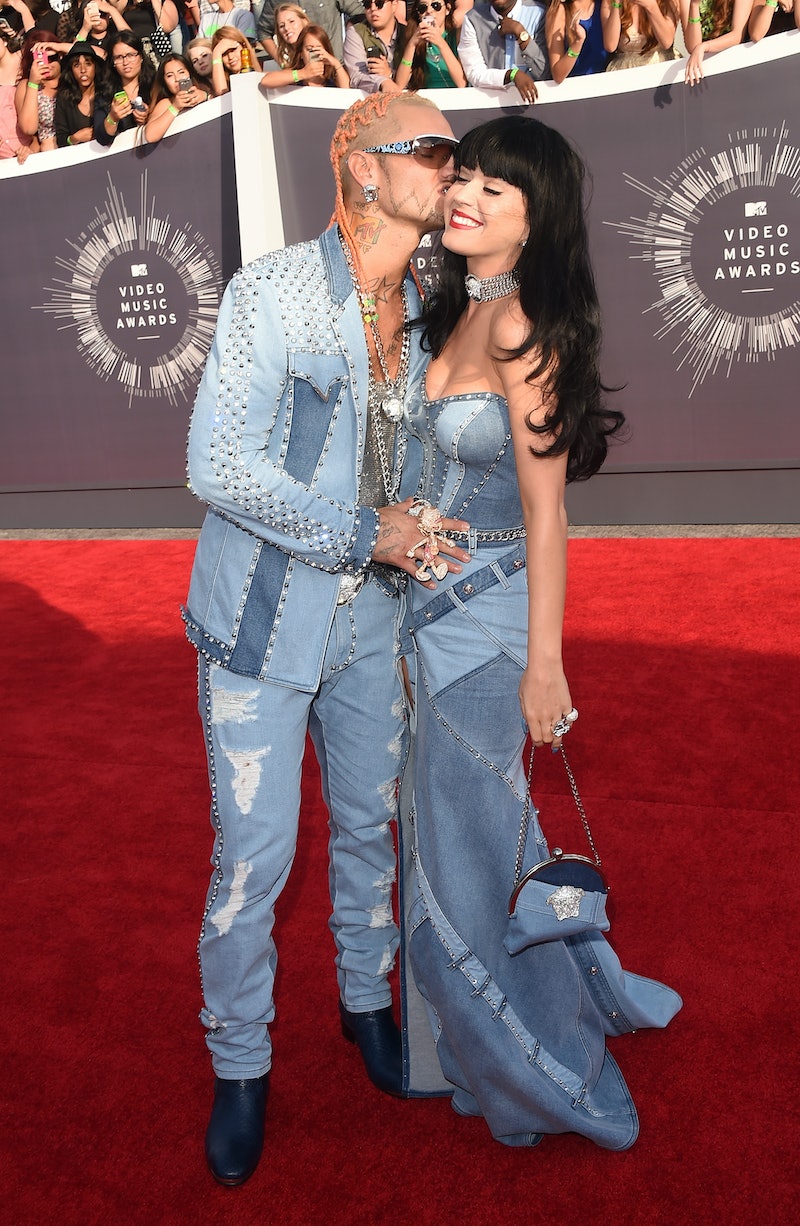 Ever since the VMAs, questions of whether Katy Perry and Riff Raff are dating have been popping up. They did wear that denim-on-denim look inspired by the former most popular couple in pop music: Britney Spears and Justin Timberlake. But just because they copied their jeans, it doesn't mean they're dating too. It pretty much seems like a publicity stunt, despite what Riff Raff told TMZ.

Still, I've got to wonder: Would dating Riff Raff really be the worst thing in the world? Especially since Katy Perry's had quite an assortment of exes. She's was married to Russell Brand (which didn't work out too well) and dated John Mayer. So how does this rapper stack up? I mean, if we're going just based off of his name, I think Perry can do better. (What is a "Riff Raff" anyway?) But let's consider this: His actual name is Horst Christian Simco, according to Wikipedia. And Katy doesn't go by her real name either. She's actually Katheryn Elizabeth Hudson. They each chose names for entertainment purposes, so at least they have that in common.

Let's take a trip down memory lane and see how Riff Raff measures up to the various men of Katy's past.

John Mayer and Riff Raff are both musicians, albeit very different types of musicians. When they were dating, she recorded a song with John, which was pretty adorable, and she's already released a song with Riff Raff titled "This Is How We Do". As far as how they compare, I think John Mayer might've been a better option. Actually, I'm 100% sure of it.

This relationship definitely took its toll on Perry, and she's talked about attending therapy afterward. Still, she was pretty happy in the beginning of their marriage. They were always smiling and laughing together, at least in public. If he made her so happy, that can't be a bad thing. And unlike Riff Raff, I think Brand is funny on purpose. Although it may be close competition, I'd have to choose Brand on this one.

Yup, way back when, she dated the Gym Class Heroes singer. Apparently her song "Circle The Drain" was about this relationship, which comments on his substance abuse and how draining he was to deal with. So yeah, let's just say this was not a great match. Riff Raff wins in this comparison, simply for not having a song about how terrible it was to date him.

Conclusion: Compared to the tumultuous relationships with McCoy and Brand, Riff Raff basically seems like a gentleman. But on second thought, after those really bad relationships, why put herself through another? I think it's worth waiting around for a guy that seems much more worth her time... Not one that James Franco based his Spring Breakers character on.