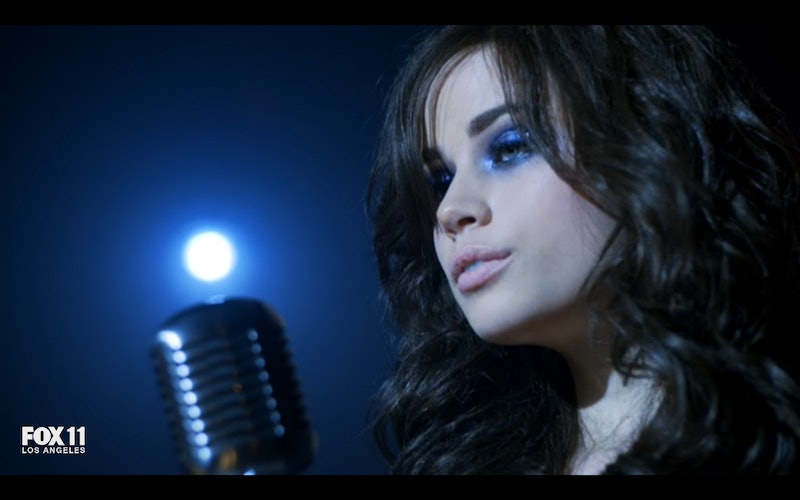 The fourth episode of Gotham introduces Makenzie Leigh as "Liza," Fish Mooney's new protege. As always with this show, it's tough to imagine that these characters will have to be 10 to 15 years older before Batman even emerges onto the scene. They've already established that other villains like Catwoman or Poison Ivy are also preteens, so while Liza's tough but silent type is similar to, say, a character like the Huntress, she can't really be a contemporary of Batman if she's already an adult. But that doesn't mean that the Gotham producers aren't taking Batman comics as inspiration for Liza's character.

Fish seems pretty intent on using Liza to seduce someone, and she's trying to get back into Carmine Falcone's good graces after getting a little too close to letting him know about her designs on his position, so Liza could be a Trojan Horse, groomed to cozy up to the mob boss and kill him at his most vulnerable. But since Falcone is more of an established Batman villain than the Gotham original Fish Mooney, it's very possible that her plan could backfire bad enough that Liza betrays her out of her own power hungry ambitions. In the comics, Falcone's wife is named Louisa… could Liza be a new take on the name?

After a long life as a mob matriarch, Louisa eventually gets separated from Carmine, moves to Italy, becomes blind, and joins a convent in the Catwoman comic Catwoman: When in Rome , written by Joseph Loeb and Tim Sale, the same duo who created The Long Halloween and other comics that have been used as inspiration for some of Gotham's mob storylines before. Catwoman: When in Rome is an uncharacteristically trippy book inspired visually more by Italian illustrations than typical comic books, and it's one of Louisa's only prominent appearances.

And if we're also giving wild guesses, she could also be the Black Canary. She's more of a DC character than a Batman character, but she is known for her distinctive singing voice — which is also her weapon — and for her love of fishnet stockings, which we saw Liza wearing during her club audition-turned street fight. But there's already one TV Black Canary out there. She's on DC's other popular network series, Arrow, since the Black Canary is traditionally the love interest of Oliver Queen. It's unlikely that we'd see Liza become a vigilante crime fighter before Bruce Wayne takes up the mantle, but she might turn out to be a mobster's wife or a trained assassin instead — we'll have to keep watching Gotham to find out.