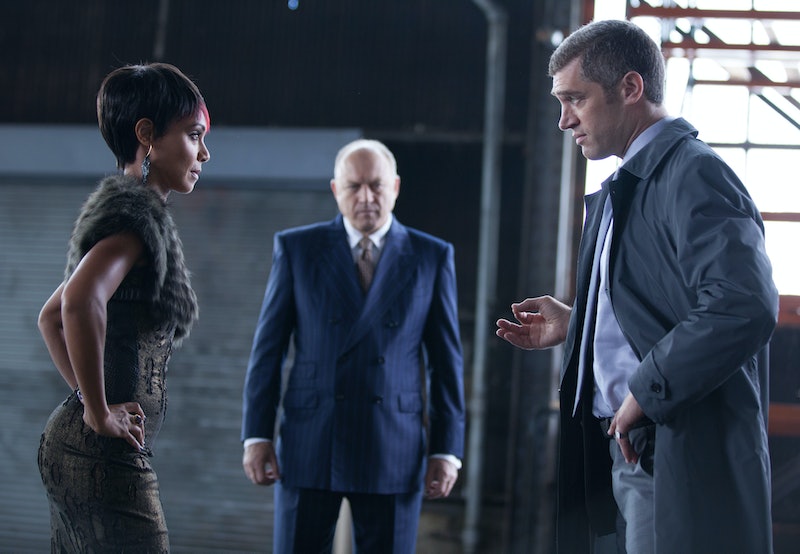 Now that we're at Episode 5, Gotham is starting to get really complicated, since every little detail or minor character could turn out to be really important in a few weeks or a huge super villain six seasons from now. But so far, the episode titles have been very straightforward; the episode about the Arkham lot was called "Arkham," the episode about the Balloonman was called, you guessed it, "The Balloonman," etc. But the Oct. 20 Gotham episode is titled "Viper," so what does "Viper" mean for Gotham ?

Vipers are venomous snakes whose bites are quick and deadly. They're common, but that doesn't mean they're not dangerous, and even though they're not as fast or as intimidating as some other snakes, once they bite, you'll regret underestimating them. That's what Fish Mooney is hoping her new ally, Liza, the seductive lounge singer, will do to Carmine Falcone, the mob boss who's starting to suspect that Fish may have it out for him. And maybe part of Fish training her new assistant is giving Liza her own animal-inspired pet name — come on, is there any way Ms. Mooney's parents named her Fish? Even Gotham City parents can't be that crazy.

But the episode will also cover Detectives Bullock and Gordon as they attempt to stop a "new drug" from making its way through the street. The drug "causes euphoria," then a quick death. Maybe this drug is injected into the body, like heroin, giving users a snake-like puncture mark on the skin? And its vicious, deadly nature could also explain the snakespiration. Viper venom can have multiple effects — one type can clot blood extremely quickly, while others can have a paralytic effect, suffocating the bite victim when their diaphragm stops working. All ways that this drug could kill its own victims. Investigator Edward Nygma, the young Riddler, would probably love to give this drug a clever nickname like "Viper" if it has snakelike effects.

The question then becomes, where is this drug coming from? It could be either of our mob bosses, Falcone or Penguin's new boss, Sal Maroni. It could be crooked cops, like those targeted by the Balloonman. We've also seen the child trafficking ring send its goons into Gotham to recruit street kids even though the "Dollmaker" was working somewhere out of town. Those kids will probably be the first ones affected by the new drug being distributed — and the Mayor was all too eager to send them off to federal facilities, so perhaps this is a local government conspiracy. The only person willing to fight against that? Detective Jim Gordon, of course.

And since these drugs and Liza's new role will both be covered in the Monday night episode, maybe the meaning of "Viper" will encompass both story lines. There's no reason the title can't have a double meaning.