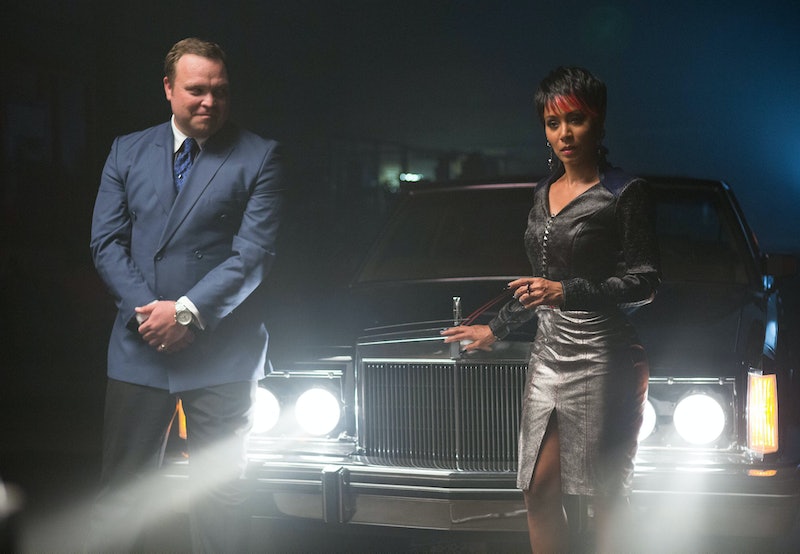 Fish Mooney was definitely not messing around in Monday's episode of Gotham . As always, Fish was looking for a new entertainment for her club, but she had bigger plans for her next performer beyond just telling jokes. She was looking for a weapon. And in order to narrow down her choices, Fish hosted a duel to the death between two women for the honor of working for her. As we know from the previews of the Gotham episode, new character Liza is the weapon Fish Mooney is looking for and she certainly proved that she's ruthless enough to handle anything Fish throws at her. But what is Fish planning?

Apparently, if you want to be Fish's weapon, you need to have three very important skills. First, you have to be able to sing. She does run a club after all. Second, you have to be seductive. How did Fish assess that? She asked the ladies if they were into men or women and regardless of their answer (both said men) she made them try and seduce her. Liza was the only one to impress her there. The final test was to be driven out to a remote location where Fish had the two women fight to the death, another test from which Liza emerged victorious. It was all pretty blatant fan service for the men in the audience who weren't already here for Batman, because it's unclear what any of these three skills really have to do with each other.

But what if it wasn't just random fan service? What is Fish planning to do with Liza now that she has her? It's clear that she's looking to take control of Gotham from Falcone, who she perceives as old and losing his grip on the city. It's less clear how Liza is supposed to fit into her plans. Fish has lost Oswald Cobblepot, aka the Penguin, and her part time paramour in the last few episodes, so is Liza meant to fill both roles? I already have a theory.

In last Monday's Gotham episode, Fish arranged for Falcone's girlfriend to have an unfortunate "accident." Maybe Liza is going to be groomed as her spy, someone for her to send to Falcone in order to seduce him and thus keep Fish in the loop on any plans or meetings he might exclude her from. Then, when the time is right, Liza will be in a perfect position to kill Falcone and then slip away unseen. Or not. After all, what does Fish care what happens to Liza after she gets what she wants, which is Falcone's death?

The trouble in Gotham is rising to a fever pitch and it's all going to boil over eventually, as Falcone and Maroni struggle for power, Fish tries to grab as much of the pie as she can without either of them noticing, and the Mayor works to get Arkham Asylum open unaware that it might be the catalyst in a gang war. Where Fish and Liza manage to fit themselves into all of this still remains to be seen, but now that we've seen what wild child Liza can do, then those of us who weren't taking Fish seriously should probably start doing so now. Then again, considering the body count that Fish has either racked up or tried to rack up, was there anyone left who didn't consider her a serious threat? I didn't think so.