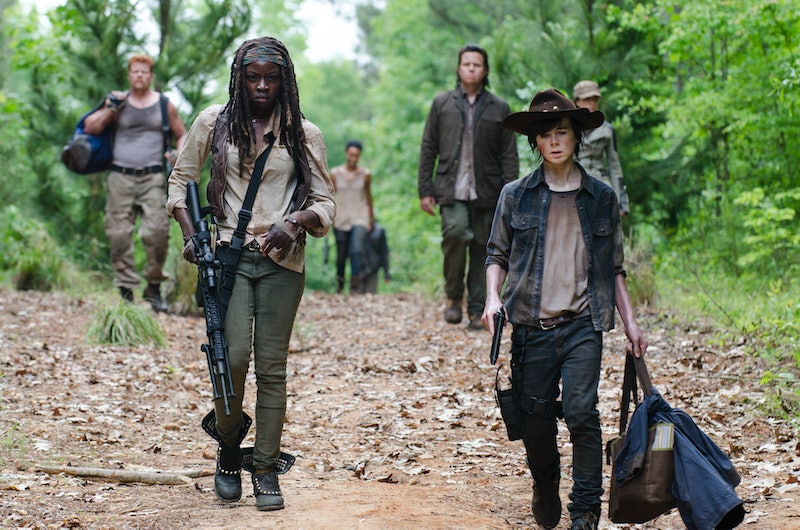 The preview for next week's episode of The Walking Dead , "Four Walls and a Roof," hints at deaths for some of the characters we know and love. It's been awhile since one of the characters we're attached to has been killed, and if "three of us are gone," as the preview suggests —who will we lose? While Glenn decided that they would all stick together, (how nice would it be to have the gang back together again?) by the end of this week's episode the group was once again fractured. While most characters are "safe" at Gabriel's church, three have strayed away. Daryl and Carol have headed off in a car together in hopes of finding Beth, or at least whoever kidnapped her in Season 4. Bob has been taken by Gareth the cannibals from Terminus, who were making quite the meal out of Bob's left leg. Yum.

While it appears that Bob is in the worst-case-scenario and may die, will "the hunters" actually kill him? Even though Terminus seemed to be a well-oiled slaughterhouse, somehow Rick, Glenn, Bob and Daryl managed to not become Gareth's meal in last week's episode. Will he be able to avoid death a second time? Gareth and his crew were merely chowing down on one of Bob's legs, so there is the potential that he will be spared. Since Hershel's death, the popular #oneleggedhershel hashtag has not been able to be used — maybe if Bob does live, #oneleggedbob will replace it.

Beth has gone unaddressed so far this season and it is driving me crazy! Beth was becoming a much more likeable character toward the end of Season 4 and not knowing her whereabouts has been quite troubling. Episode 2 gave us hope that Beth will be found when Daryl spotted the car that she was taken away in last season. Together Daryl and Carol headed off to find her. While I have great faith that these two could probably survive anything, leaving the group could wind up getting them killed, or at least separated for awhile!

While in the church, the gang seemed to agree that they would set off toward Washington D.C. It seems like Eugene's potential cure is becoming the only real hope there is for survival. Yet, will Eugene survive the journey? He doesn't quite have a lot of skills for the apocalypse, other than his potential cure. His ability to survive has been dependent on Abraham and Rosita. Eugene really needs become more self-sufficient, or he could end up as one of the next to be lost. It would be tragic for him to have been the key to the survival of the human race, but be killed before ever getting to D.C.