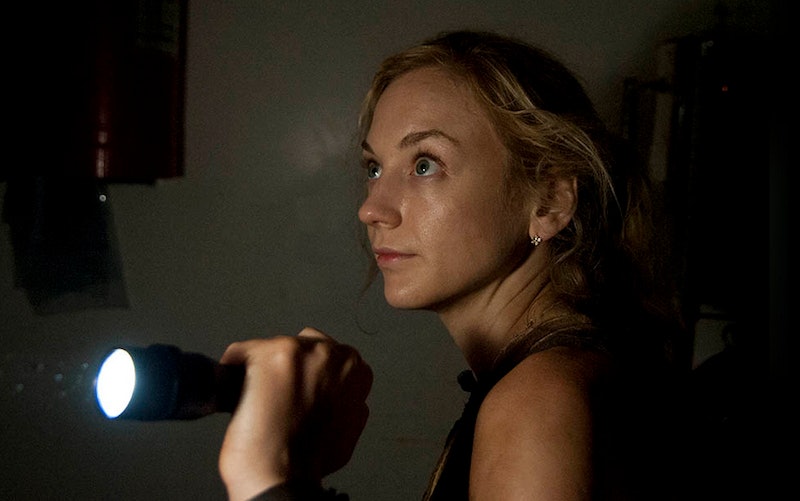 Beth Greene has never been my favorite character on AMC's zombie hit The Walking Dead, but I have to give credit where credit is due and say that she's really come into her own. Long gone are the days of locking herself in her room to cry throughout Season 2, and in their place is a girl who has not only matured, but has learned to kick a little ass. She got tough, but still managed to keep that happy-go-lucky, sing-song-y, Judith-lovin' part of her personality audiences had grown accustomed to, which made her kidnapping at the end of last season all the more shocking. The Season 5 premiere answered a lot of questions, but her location was not one of them. I hate to be a nag, but... um... WHERE IS BETH on TWD Season 5?

In traditional Walking Dead fashion, wherever Beth is hiding/being held captive/recording a folk album about raising Judith while also fending off hordes of the undead, has been kept under wraps (under 1,000 wraps, to be precise). ComicBook.com reported in April that when a fan asked showrunner Scott Gimple about the fate of the littlest Greene, he said, "I’m neither sadistic nor evil, as far as I know," which is obvz a lie since the Season 5 premiere offered no new info on her whereabouts. He also revealed:

Can't you just tell us already? No? Ugh.

Even though they're keeping her status quiet, everyone can rest assured of a few things. In a Reddit AMA with Walking Dead executive producer Gale Anne Hurd, a fan asked if audiences would be happy with her storyline. Hurd replied,

I think you’ll be amazed by Beth’s journey this season, and the challenges she’s going to face. She’s had to grow up so quickly, and I think Daryl really helped her along that path, don’t you?

If the Season 5 trailer is any indication of the journey Hurd is referring to, Beth has become a sizable badass, and doesn't seem to be at either the Alexandria Safe Zone or Hilltop Colony locations from the comics. In fact, her role in the series might be way more important than we ever imagined.

She discusses in the season's trailer how everything must be done "for the greater good" with this mystery woman played by Christine Woods, who's wearing some kind of police or security guard uniform (which looks brand spankin' new — where did she get that from?). The woman is real rude, tbh, and snaps, "When you're here, you're not the greater good, you're part of a system." See? Rude.

Beth is also seen chillin' on the edge of a large elevator shaft in scrubs...

...shooting the eff out of this walker...

...and finally, running for her life. Judging from the scrubs she's wearing, as well as the guy behind her in the last image, and the scene of her with the doctor and bleeding patient, it seems like Beth is being held at some kind of hospital. As we know from Rick's experience in Season 1, hospitals in the age of zombies are no fun. Could a colony of medically-inclined survivors have fixed one up? Why would they be holding Beth hostage? Are they close to finding a cure, or something? At least it rules out the popular theory of Beth being with Father Gabriel, who makes his first appearance in the second episode.

This nightmare hospital looks like a new creation for The Walking Dead universe that veers away from the world of the comics, and if they're going to make us wait forever and ever to find out where Beth is, it does seem like the payoff will be worth it. Thankfully between everything going down with Rick and co., curing the virus, meeting Father Gabriel, and the reappearance of Morgan, we'll have enough to keep us busy.