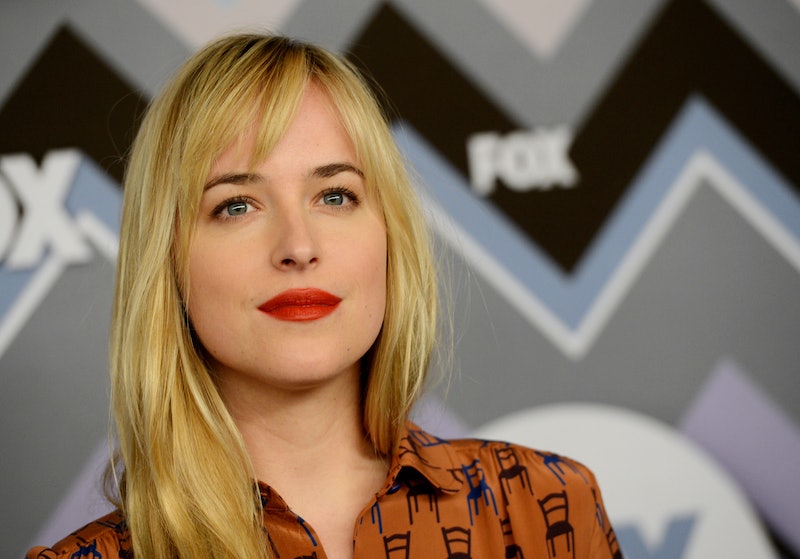 Ever since fans found out E.L. James' novel Fifty Shades of Grey was going to become a movie, all they could think about was who was going to be cast as Ana and Christian. Today, one part of the wait is over. Deadline confirms that actress Dakota Johnson will be Anastasia Steele in the upcoming film, set to be released Aug. 1, 2014.

Late last week, Fifty Shades movie producer Dana Brunetti announced that they were close to handing out offers for the lead roles — he told a northwest radio station that the last thing they had to do before getting the actress to sign on the dotted line was a "chemistry test" to see if she and Christian Grey exuded the passion needed to sustain their on-screen relationship.

It looks like Johnson passed the test with flying colors and will soon portray the most famous literary co-ed with a penchant for whips, chains, and older men with lots of money.

Not sure who she is? Johnson had a small role opposite Justin Timberlake in The Social Network and her credits also include Need for Speed, 21 Jump Street, The Five-Year Engagement, and the cancelled-too-soon Fox sitcom Ben and Kate. The daughter of Melanie Griffith and Don Johnson, Dakota, 23, beat out out other rumored Ana hopefuls such as Emma Watson, Emilia Clarke, and Felicity Jones.

The announcement about Ana was made by E.L. James on Twitter. She wrote:

Johnson's not that well known, but soon, she's about to be one of the biggest stars in Hollywood. Now, if only they'd tell us who was going to play Christian ...