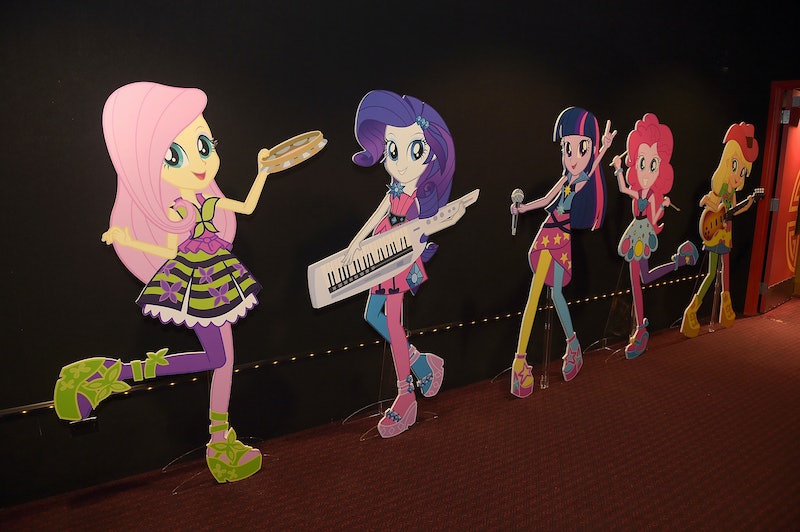 From the writer/director of a horror-comedy about high school pariahs fending off flesh-eating zombies and a short film about a young girl enduring the abuse of her mother’s boyfriend comes, curiously, a My Little Pony movie. It’s not particularly bizarre that Hasbro Studios is setting up a big screen adaptation for the age-old property — which was redelivered to the public conscious (for the third time) in 2010 with the astronomically popular Friendship Is Magic series—for a 2017 release, as reported by Variety.

After all, the studio ordained a Jem and the Holograms flick earlier this year, casting the likes of Molly Ringwald and Juliet Lewis. What is a little strange, however, is the creative force the studio has wrangled to write the movie: Joe Ballarini, the writer/director of the above described Dance of the Dead and Bedbug, along with a small handful of other macabre pieces. So what exactly are we gearing up for with his take on My Little Pony

Of course I don’t expect Hasbro to back a MLP movie that isn’t suitable for young audiences. Ballarini isn’t going to pump the gore of Dance of the Dead, the sinister drama of Bedbug, or the bawdy, graphic material of his sex comedy Father Vs. Son into his upcoming animated feature. But I do wonder if any mature undertones will carry into the movie. After all, it’s not as though My Little Pony doesn’t have its… older fans.

The Brony crowd, one of the most infamous fan communities populating the Internet, has all but usurped My Little Pony fandom from the program’s intended demographic. Entailing two documentaries (2012’s Bronies: The Extremely Unexpected Adult Fans of My Little Pony and 2014’s A Brony Tale), the annual convention BronyCon, and an unparalleled seat in the pop culture sphere for a fan base of its kind, Bronyism might be the population to which Hasbro is really hoping to appeal with its new film.

As such, I am inclined to wonder about the presence of a more suggestive My Little Pony movie. Although the documentaries mentioned above paint the Brony worlds with a light of reverence, illustrating the grown men who adhere to My Little Pony fandom as earnest admirers of the material and its propagation of positive morals, the public’s association with the subculture is hardly as clean. Bronys won the spotlight thanks to stories of submitting individuals engaging in “romantic” and “sexual” relationships with their My Little Pony toys, or with imaginary incarnations of the characters. No matter how many positive docs are produced, people on the whole are not soon going to emancipate from these ideas of what it means to be a Brony.

And if Hasbro is subscribing to these generalizations, its forces might indeed be wrestling with the option of making its My Little Pony movie as titillating to the group as possible. Sure, kids and families are always a frugal demographic… but you can’t ignore the market value in adults who devote themselves wholly to My Little Pony merchandise and lifestyles.

Thus encourages the curiosity in Ballarini’s employment following a long line of adult-directed projects. Granted, the multihyphenate lent a hand to the Ice Age: Continental Drift script in 2012, but did not receive writing credit for his work. In light of this, Ballarini’s name is associated almost exclusively with mature material.

It’s not unprecedented for writers to hop between kids’ and adults’ movies — Guardians of the Galaxy’s James Gunn is responsible for the family friendly Scooby Doo and the pitch black Super; Dan Fogelman wrote Disney’s Tangled and Crazy, Stupid, Love within a year of each other. But the particularly dark nature of Ballarini’s writing in company with the sordid connotations (be they just or otherwise) with My Little Pony’s chief audience makes for a particularly enigmatic film yet to come.

I don’t know what kind of My Little Pony movie we’re about to get… but with Ballarini on board, Hasbro does at least have me curious (and maybe that’s the gambit itself).