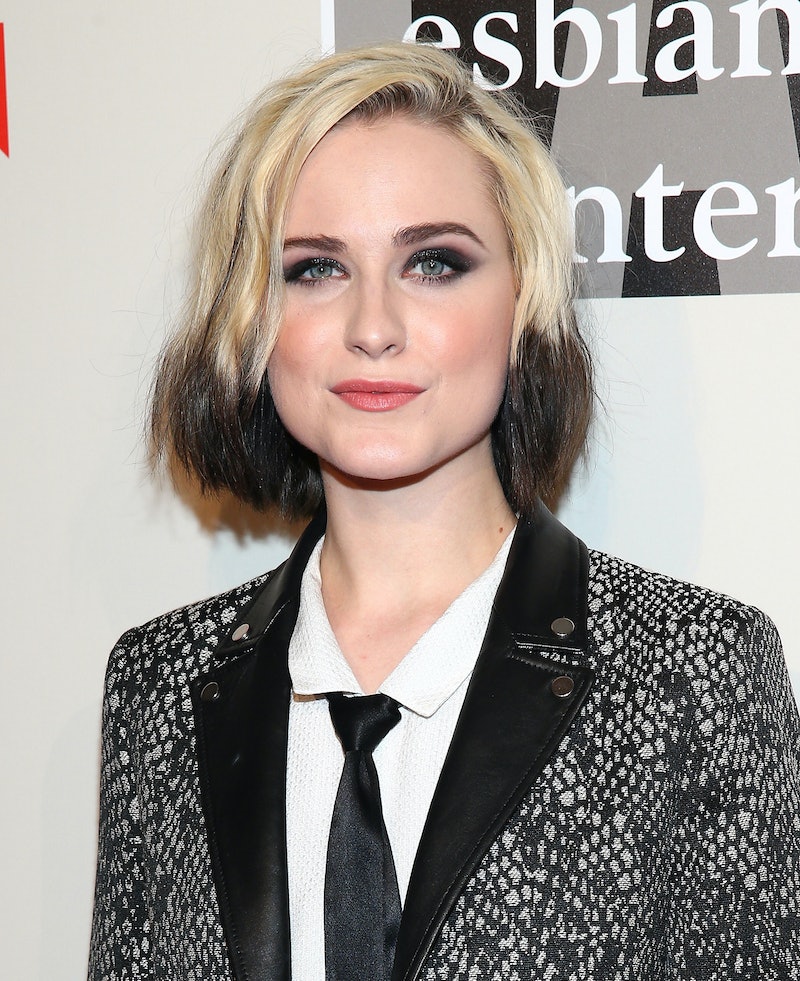 When you hear of a couple getting together after some long-term pining, it's just adorable enough to make you want to squeeze the nearest stuffed animal and/or cat. Such is the case of Evan Rachel Wood and Katherine Moennig's new relationship. How did Evan Rachel Wood and Kate Moennig meet, anyway? Now that the Thirteen actress and the L Word cast member are dating, Wood has opened up about how Moennig was her first crush. It's like a fairy tale made up entirely of girls who look amazing in suits, and I need to know more about how it came to be.

Back in May, Wood and husband Jamie Bell separated after two years of marriage. On Oct. 13, Moennig and Wood both showed up to the same museum gala, and were holding hands throughout the night. Just for our own intents and purposes, we're going to take this as an admission of being totally in love. So essentially, Wood was back on the market for just a hot second. But anywho, how did these two talented ladies get to talking?

You may have already heard about the exchange that Moennig and Wood had in February of last year, where Wood essentially admitted to being Moennig's secret admirer. It all began at the flea market, naturally, as most great romances do.

At the time of the exchange, Wood was still with her ex. However, there was no harm in cultivating a friendly little friendship over Twitter. They shared the content of their weird dreams on the social media outlet, just like in-person friends do.

As platonic tweet-pals, they would discuss important friend things, like television.

Clearly, they have everything in common to make a relationship work: the same love of antiquing, the same sense of humor, and the same taste in entertainment.

Alright, so they had a long Twitter courtship that I'm guessing led to coffee, which then led to true love. I can't ascertain where exactly their first in-person rendezvous was, but it looks like they definitely made their first introductions and built up a rapport on social media. Twenty-first century love owes so much to flea markets and Twitter.

More like this
Evan Rachel Wood Has Stayed “Good Friends” With Ex Katherine Moennig
By El Hunt
Ralf Little’s Fiancée Has A *Very* Impressive Resumé
By Sam Ramsden
Selena Gomez Is Fine Being Single, But She Still Manifested Romance On 'SNL'
By Martha Sorren, Jake Viswanath and Jack Irvin
Why Sara Pascoe's Husband Is Familiar To Comedy Fans
By Alice Broster
Get Even More From Bustle — Sign Up For The Newsletter