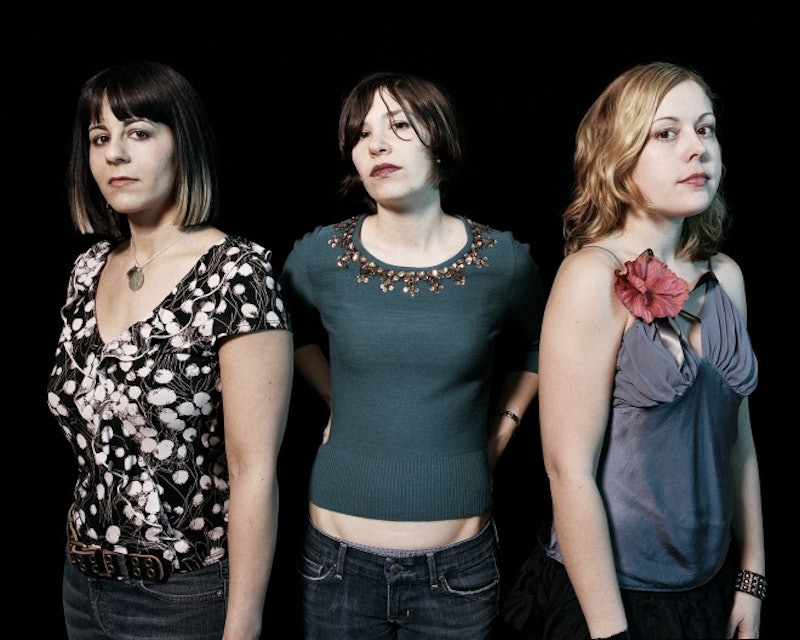 This is not a drill, I repeat, this is NOT a drill. After an exhausting seven year hiatus, riot grrrl queens Corin Tucker, Carrie Brownstein and Janet Weiss aka Sleater-Kinney are coming back with a new album and tour. This follows the news of a career-encompassing box set that's to be released Tuesday. As I type this, I'm still screaming.

See, Sleater-Kinney actually decided to disband at the height at my riot grrrl days, so pretty much the literal moment I started getting into them. So though I'm not alone in waiting for them to re-unite, I've basically just been listening to Wild Flag and crying into my pillow a lot. This was confusing to most people up until the last few years, because the band's popularity has probably been bolstered by Brownstein's little side on a little show called Portlandia. Eh, you've probably never heard of it.

Whatever the case, their box set is already a set fixture on my 2014 Christmas list, their upcoming album No Cities to Love will be snatched up before you can say "put a bird on it" and as for their tour? It's not a matter of if I'm going, it's simply a matter of who I'm going with (you're all invited!). But before any of that, let's take a trip down memory lane with 7 songs from their collection (one off each album) that are SO worth re-visiting.

"A Real Man" from Sleater-Kinney

Sleater-Kinney had yet to really develop their sound and style on their debut, they were still really married to that early riot grrrl, Heavens to Betsy feel of like, "I just picked up a guitar last Thursday, and I'm going to write minute-long songs about sex and stuff." Which is FINE, and "A Real Man" is a great example of that format. Still, it's mostly here to show how the band evolved.

"I Wanna Be Your Joey Ramone" from Call the Doctor

The first Sleater-Kinney album I listened to was actually Call the Doctor, and this track resonated to 15-year-old me like a violent shockwave. The entire album isn't as rough as their debut, but there's still a very youthful vibe, and you can really feel that here. "I Wanna Be Your Joey Ramone," is such a teenage, Punk Rock 101 sentiment, both romantic and snotty, in an endearing way. Pair that with growls about being "the queen of Rock and Roll" and I was hooked.

"Words and Guitar" from Dig Me Out

I mean, that's a lot of what it boils down to, isn't it? Just a really fun song following the solid format of Tucker's wails and Brownstein's playful interjections. Not going to lie, but I was dancing in my seat just now re-listening to it.

"God is a Number" from The Hot Rock

I picked up The Hot Rock at Princeton Record Exchange a year or so ago while desperately looking for All Hands on the Bad One (we'll get there), and even though it's not my favorite record, it's hardly a consolation. Just listen to tracks like "God is a Number," that mixes melody with an almost delicate roughness. The little guitar screeches in that song are pure poetry.

"#1 Must Have" from All Hands on the Bad One

All Hands on the Bad One may just be a perfect album, top to bottom. The title track is the most recognizable, I think landing in the indie flick Manic, although "Milkshake 'n Honey" is my all-time favorite, with irresistible lines such as "keep turning me on/with those French words I can't pronounce." However, I have to give this one to "#1 Must Have," written about the media's commodification of the riot grrrl scene, which in the late '90s had devolved to all that Spice Girl "girl power" nonsense. It's wildly intelligent, boldly feminist, and just an all around terrific song. It embodies the essence of Sleater-Kinney.

A song about a smart goody-goody gone bad, tempted by rock n' roll. It definitely conjures up images of Rory Gilmore for me, but to be fair I've been on a week-long Gilmore Girls bender. Deserves to be on here for that weird intro alone.

"The Fox" from The Woods

Honestly, I have no idea what it's about, but the second you put that on, you instantly feel like the baddest bitch in town. The guitar sound has never been more violent, Weiss is giving the drums the most intense beating of a lifetime, and Tucker has evolved from woman to banshee. Maybe my second favorite Sleater-Kinney track of all time, definitely blasted it when I was passive-aggressively ignoring an ex-boyfriend, who passively-aggressively blasted the song back at me. It can get loud, to say the least.

More like this
Shania Twain Replaced Brad Pitt’s Name In “That Don’t Impress Me Much” At The PCAs
By Jake Viswanath
You’ve Been Singing The Wrong Lyrics To “All I Want For Christmas Is You”
By Sam Ramsden
One Of The UK’s Most Streamed Songs In 2022 Is A Surprise Hit
By Sam Ramsden
Spotify Wrapped 2022: The Best Celebrity Reactions To Their Streaming Stats
By Radhika Menon
Get Even More From Bustle — Sign Up For The Newsletter