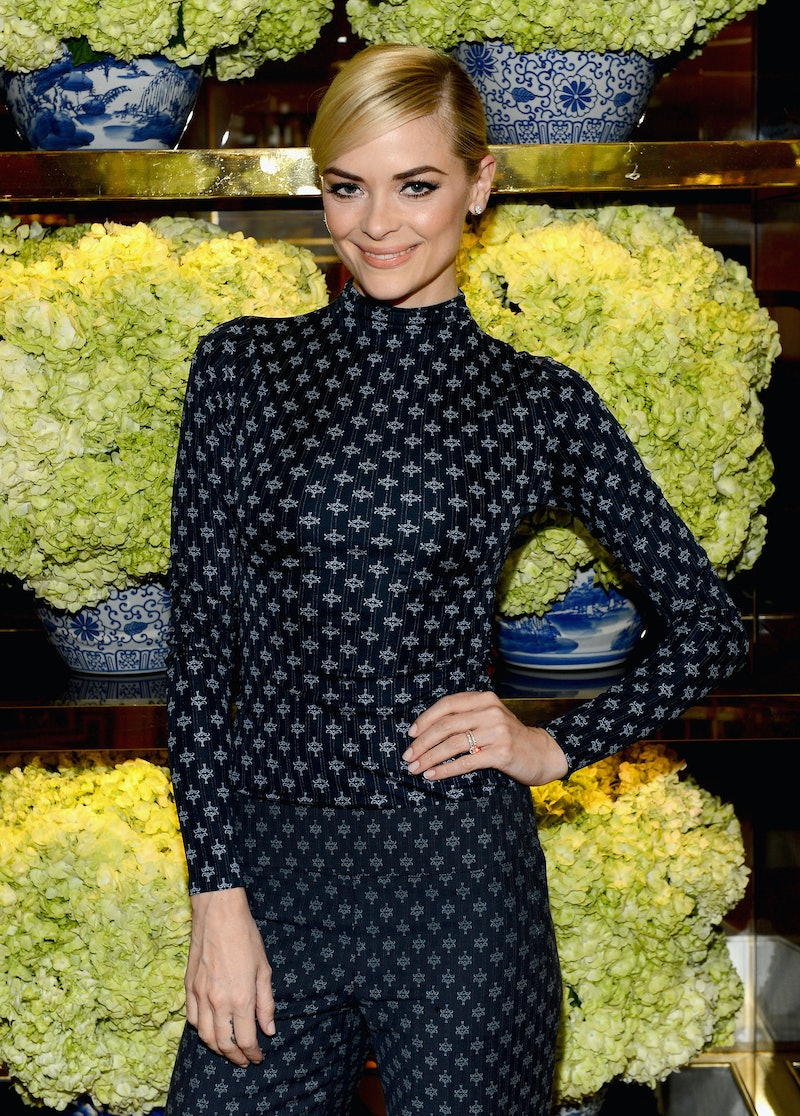 I'm sorry, but it's officially absolutely impossible not to love Jaime King. The Hart of Dixie star has become a must-follow on social media in the past few months — and no, I'm not just saying that because King's posted Dixie Season 4 spoilers on Instagram. Back in July, King opened up about her fertility struggles in a brave Instagram post dedicated to all mothers out there that believe they are alone. And it turns out, unsurprisingly, that her support for moms also extended to her expecting BFF, Rachel Bilson. In a recent interview with E! Online, King revealed that she gave Rachel Bilson mommy-tips during filming of Hart of Dixie Season 4, because that's was BFFs are for, duh.

According to King, her relationship with Bilson in real life is a lot more friendly than her character Lemon's relationship with Zoe Hart. "I tell her everything because she and I are very, very close," King told E! before revealing that her son, James Knight, was totally enamored with Bilson from their very first meeting. (Can you see a future romance if Bilson's having a girl or a second generation of adorable BFFs if baby Bilson-Christensen is a boy?) So, of course, the pair's recent pregnancies have brought them closer.

"Rachel has always been one of the most supportive people in my life in regards to my pregnancy," King told E!, so of course, she's returned the favor. While a very-pregnant Bilson shot Hart of Dixie Season 4, King was all over her on-set requirements to make sure that her costar didn't overwork herself like she did. "People forget that she's growing a human being inside," King said before revealing that she had to have an IV for fluids while she was shooting during her pregnancy because it was so hot in Burbank, Calif., where Dixie's shot. So, King made it a point to prevent that from happening to her fellow new mom-to-be.

So, does that mean Zoe and Lemon might bond over babies when Hart of Dixie Season 4 introduces Zoe's pregnancy to Bluebell? The two women buried their hatchet on Hart of Dixie awhile ago, but they still haven't actually become friends. If The CW series is really ending after its upcoming season, it might be nice for Zoe and Lemon to get together and bond over something like this — not that either of them really have any experience with babies on the show (but Lemon did kind of raise her sister, Magnolia). After all, Lemon has stepped in from time to time to talk Zoe off a particularly precarious ledge.

Either way, however, if we don't get to see "Lemon & Zoe: BFFs" onscreen, all Hart of Dixie fans can surely appreciate the adorable image of Bilson and King hanging out together, swapping mommy tips, while their sure-to-be adorable offspring have a playdate. At the very least, it'll help pass the excruciating time Dixie fans still have to wait for Season 4 to premiere.