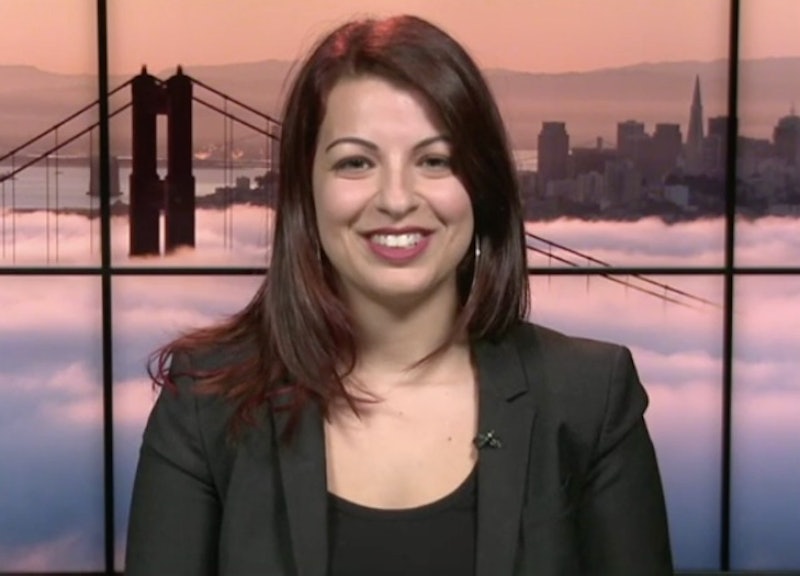 If you knew that hordes of seemingly unhinged video game fans really hated you — as in, photoshopping your image being sexually assaulted by game characters hated you — how would you respond? Personally, I'd probably sink silently into my couch cushions, letting the feelings of violation and anger simmer around, but some people who've actually faced this kind of heinous abuse do far better. They speak out, and don't let their harassers have the last word. Like, for example, this woman: feminist pop-cultural critic Anita Sarkeesian talked online misogyny after the shooting threat which derailed her scheduled appearance at Utah State University.

In the aftermath of the USU incident, Sarkeesian's spoken to a number of different media outlets — Rolling Stone, MSNBC (which has also spoken to Brianna Wu and Zoe Quinn, women in gaming who have faced similar abuse), and Bay Area-based independent news organization Democracy Now. Taken in total, Sarkeesian's thoughts and perspectives on the situation are instructive, and should give hope to anybody who's been targeted by large-scale harassment campaigns online.

After more than two years of nearly ceaseless vitriol and attacks, Sarkeesian is still surviving, and refusing to give up on her cultural critiques of video games and the industry that produces them. In simplest terms, it's incredibly impressive.

Sometimes it's the uninitiated who most easily reach the core of a situation. Such was the case when Sarkeesian appeared on MSNBC's Melissa Harris-Perry Sunday, discussing the torrent of abuse she's received online. Speaking with evident confusion, Harris-Perry asked her why she thought her videos stirred up such a frenzied backlash, saying "You're very measured, you're clear that you love parts of the game, but also that you have a critique. How in the world does that end up with death threats, and bomb scares?"

Sarkeesian's reply was pretty straightforward — yeah, it may not make sense, but this is what being a critical feminist in gaming has become.

She echoed these sentiments while speaking with longtime Democracy Now host Amy Goodman, who was able to give Sarkeesian a bit longer to lay out her thoughts (hooray for independent media). It's a must-watch if you're motivated by these issues, whether you consider yourself a conscientious "gamer," or are simply someone who might use that title, absent its present levels of toxicity.

Specifically, Sarkeesian touched on the conversation that's erupted following her USU cancellation, which she decided upon after learning that police wouldn't screen her event for firearms, citing the state's lax gun laws. Of particular irritation to Sarkeesian was the notion that the shooting threat made against her wasn't a big deal, since such threats have become depressingly routine for her.

That was immensely frustrating. You know, the school did take some security measures, but I didn’t think what they did was adequate for this type of threat. You know, to say that I’ve received threats in the past is inconsequential. I mean, I think we need to take all of these threats seriously. There’s a sort of sentiment that online harassment is not real, that we shouldn’t take it seriously. But as you just showed, Elliot Rodger had his manifesto online, and his videos online, before he actually took action.

So, this is a larger culture of women, one, not being believed about their experiences with online harassment, and when it is seen that they actually are being attacked in really vicious ways, it’s just brushed off as, "Oh, it’s just the Internet," or, you know, it’s just boys being boys, when that’s really not what’s happening here. These threats are very real, whether they are committed or not.

Sarkeesian is absolutely right about this, and it's a hugely important thing to recognize — at the point somebody is threatened so often that it begins to seem routine, it's sensible enough to conclude that they're a much-hated target. But the fact that past threats haven't been carried to fruition doesn't makes them okay, as death threats are criminal on their own, nor should it preclude her from taking them seriously.

To do otherwise would essentially be to validate the efforts of her harassers — thanks to the continuous abuse, people want her to be less cautious with her personal safety However, in spite of all the tumult, Sarkeesian is sticking with it. Maybe this, from her interview with Rolling Stone , best sums up why.

... I feel like the work I'm doing is really important. The amount of support that I get for doing it, the actual change that I am starting to see, the really sweet messages that I get from people about how they were resistant to identify as feminist, but then they watched my videos and they were like, "Oh, obviously! I agree with these things!", the parents who use it as an educational tool for their kids…all of this is really inspiring to me. When I was in Portland for my talk at the XOXO Festival, this little boy came up to me and said, "Hi, I'm a feminist gamer." How do you stop doing this work after that?