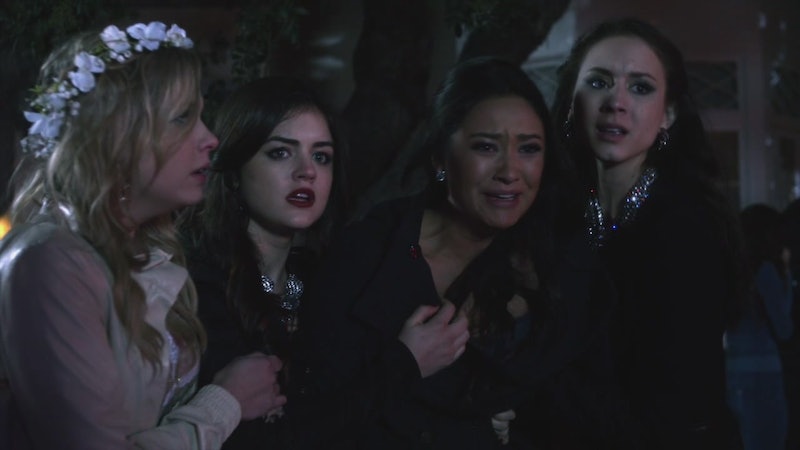 Throughout Pretty Little Liars' four seasons, none of the main characters have died... yet. But along the way, we've seen almost a dozen people perish thanks to "A" and (his or) her careful plotting and manipulating. With the annual Halloween episode airing Tuesday (Oct. 21), it seemed like time to pay tribute to everyone who has been murdered.

Although there are still a few deaths that remain unsolved — hey, Maya, are you really dead? — we will hopefully get some answers during the special, too. Instead of a standalone episode bridging the summer and winter seasons of PLL, we're getting a "fan appreciation special" chock-full of interviews from the cast. The real action will come with the first-ever Christmas special in December, and perhaps a slippery slope will cause one of the Liars to come close to death. "A" likely dishes out coal that's on fire instead of cold lumps in stockings.

And before I start naming off everyone who is six feet under, I will note that Alison DiLaurentis is not listed because she's not actually dead. And obligatory spoiler alert goes here for anyone who isn't caught up. Again, everyone who has died will be listed below. Do not scroll down if you're not prepared for all of that information. Kisses. — A.

Like Alison, Ian comes back from the dead. Ali pushes him from the top of the bell tower in the Season 1 finale and he is supposedly hung by a rope, but his body disappears. Later, he's found with a suicide note and a bloody head. Oh, "A."

Oh, Maya. Emily's love was murdered by a guy pretending to be her cousin, Nate, but since we never saw the body in the Season 2 finale, I have my doubts.

A creeper named Lyndon James poses as Maya's "cousin," Nate, but he's actually Maya's stalker. When he tries to kill Emily in a lighthouse in Season 3, she stabs him in self defense.

In Season 3's Halloween episode, Garett is killed off by "A" and Aria is trapped in a box with his corpse. This takes a haunted house to a whole new level.

There was a fake-out about Wilden in Season 4, but we found out for sure he was dead in the Season 5 premiere. CeCe killed him to protect Ali, it turns out.

When Shana reveals she's part of the "A" team and is about to shoot the Liars, Aria sneaks up behind her and bludgeons her to death in NYC. Oops?

Turns out that Ali wasn't the one in her grave — it was actually Bethany Young, a patient from Radley who was dressed as Alison. Melissa Hastings buries her alive because she thinks Spencer accidentally killed Ali and wanted to cover up for her. Sisterly love?

Just like Bethany, Mrs. D. was buried alive. We don't know for sure who killed her, but she's definitely gone.

After telling Aria that she thinks Alison is "A," Mona is murdered in her own house. Though we have no idea who did it, the walls were splattered with blood in the Season 4 summer finale.

For more on the death and mayhem on Pretty Little Liars, check out Bustle's podcast Taking This One To The Grave: