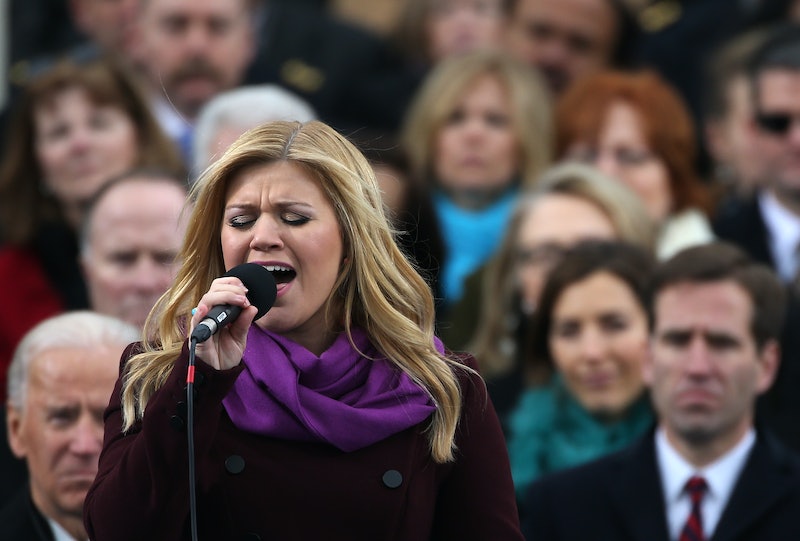 Kelly Clarkson started out her musical fame through cover performances on American Idol, so it's a nice little tribute that she's kept up the tradition in the twelve years since her win. Most recently Clarkson covered Sam Smith's "Stay With Me" during a recent performance at Symphony Park in Charlotte, NC. It was pretty beautiful: Clarkson and Smith share a voice build for ballads with belting room.

Clarkson's performance of the recent hit song of course reminded me of some of the other amazing covers the singer's done over the years — and long after her American Idol days. Did you know that Justin Timberlake's "Cry Me A River" sounds damn good coming out of Clarkson's mouth? What about Mumford & Sons' "I Will Wait?" Well, they do. They really, really do.

Clarkson's made these covers a staple of her performances: Fans put in requests, and she'll chose one to sing during every show. She usually has a little preamble before about the fan who suggested it or the song itself, and it's served as a good way to make each show unique from the next with her song choice. That she's got a voice that can pull off so many genres almost seamlessly doesn't hurt.

And so without further ado, here are some of my favorite Clarkson covers, starting with the most recent:

"Cry Me A River" — Justin Timberlake

And from her American Idol days, for old times' sake:

"Up to the Mountain" — Patty Griffin