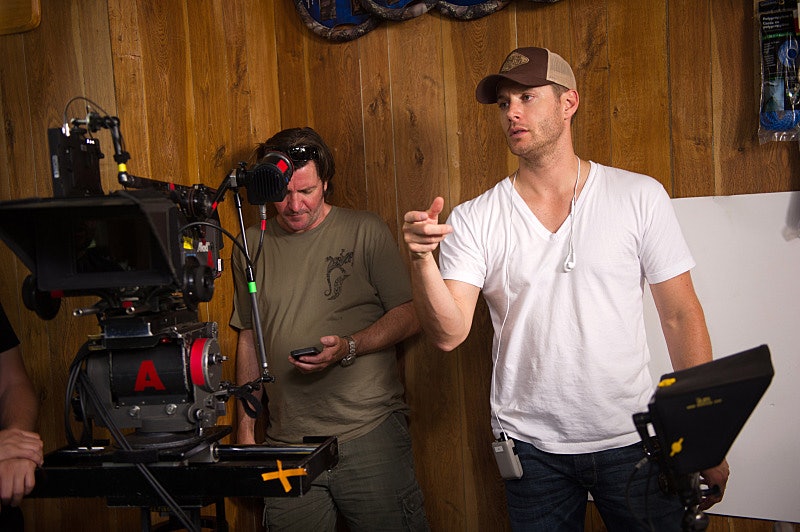 Supernatural fans, it's time for some real talk. I'm going to say something we all have known for 10 years now. Jensen Ackles is amazing. He's beautiful, a great actor, the perfect foil and friend to Jared Padalecki, and after the last four seasons, we also know he's a great director. Ackles directed Supernatural Season 10's third episode "Soul Survivor," and I cannot wait to watch it because his previous turns behind the camera have been truly great.

After many, many years working as an actor on soaps and a few CW shows including Smallville (I will always remember his character Jason Teague fondly), Ackles finally stepped behind the camera of Supernatural six years into filming the series. It took him long enough to give the director's chair a try and, in my opinion, it fit him like a glove. His first outing, the episode "Weekend at Bobby's," was a really fantastic episode in a rather strange season for the show that seemed focused on rebuilding. Since then, Ackles has taken on the job of director two more times, not including Tuesday night's upcoming episode, and both were successful efforts. In fact, I think the actor should take to the director's chair more often, because who doesn't want a double dose of Ackles in their Supernatural episode each week?

So let's go over Ackles' previous attempts at directing, starting with "Weekend at Bobby's." The first episode Ackles directed followed Bobby's point of view as he continuously helped the Winchesters get out of sticky situations and attempted to get his soul back from Crowley. The episode was not only well-shot, but provided a wonderful glimpse at how much Bobby actually did for the boys. It made fans respect the man even more, if that was even possible. Obviously the writing played a huge part in the success of the episode as well, but Ackles' deft hand behind the camera showed Bobby in a lonely life with constant struggle, despite having the Winchester boys as companions and makeshift sons. It was an episode shot with traces of both humor and sadness and a really successful first try at directing.

Ackles then waited a whole season to try his hand again behind the camera with the Season 7 episode "The Girl Next Door," which featured a Doctor Who alias and the mythical creature the kitsune. While the episode itself starts out with a standard "monster of the week" case, it evolved into a brilliant look at Sam's inner psyche, as during this episode he is still experiencing hallucinations and Dean kills his kitsune friend, despite her not being the killer they're looking for. Dean's reasoning: No matter how much a creature may say they have changed and do not harm people, they won't be able to deny their nature forever. This is yet another wonderfully written episode that was only elevated thanks to Ackles' talent behind the camera to illicit the most emotion out of the page.

Finally, Ackles third effort behind the Supernatural cameras was Season 8's "Heartache." It followed the boys as they solved a case involving an athlete who made a deal with a Mayan god to live forever, but when he committed suicide, his organs were transplanted and the receivers of the organs started murdering people to fulfill the Mayan god's demands. The episode again follows the "monster of the week" pattern, but its underlying deeper story involves Sam contemplating quitting hunting after he and Dean successfully close the gates of Hell, while Dean wants to continue hunting thanks to his time in Purgatory. It's another episode that handled the brothers' relationship very well and continued to prove that Ackles has just as much talent behind the scenes.

"Soul Survivor" yet again looks like it'll be a directorial success for Ackles, as the episode will feature Sam doing everything in his power and beyond to get his brother back to human form while Crowley reaches out to Castiel for help in Hell thanks to Deanmon's wild antics. Complicated brother relationship? Check. Interesting character dynamics? Check. Yup, this is a signature Jensen-Ackles-the-director episode.