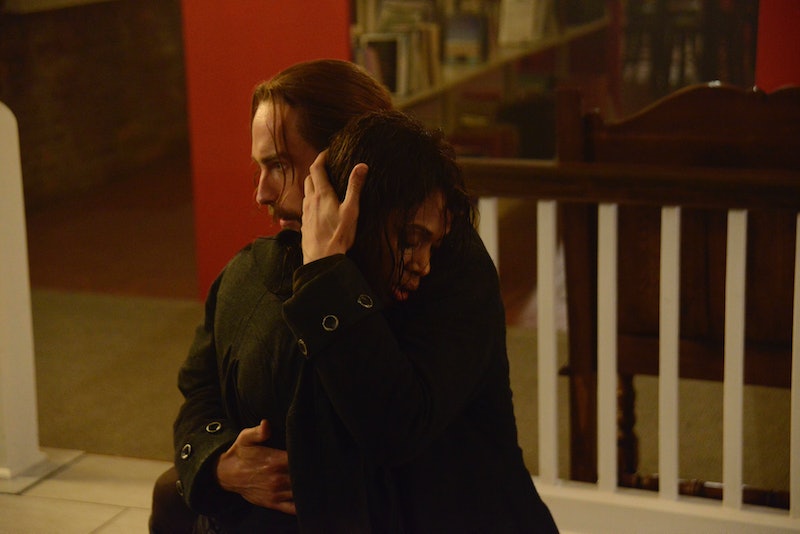 Rejoice Ichabbie fans! For there is cause for hope. Katrina is deep in the doghouse after Monday night's episode of Sleepy Hollow , "The Weeping Lady." The episode followed Ichabod and Abbie as they continued their quest to stop the looming apocalypse. However, they were sidetracked yet again after Ichabod's friend and Colonial re-enactor Caroline was murdered by the not-so-mythical spirit The Weeping Lady. Why did Caroline have to go? Apparently it's because of her friendship with (and crush on) Ichabod because, of course, Ichabod had a history with the Weeping Lady before she went all, you know, dead and creepy. Is there anyone from the Colonial Era who didn't know Ichabod? It seems more and more unlikely at this point. So what does this have to do with Ichabbie's possible future relationship you may ask? Quite a lot as the partners grew closer together while Ichabod and his wife pulled further apart.

A little backstory about Ichabod and The Weeping Lady's history: The two were previously "promised to each other" many moons ago when they were still children. After Ichabod left for the states, they lost touch and Ichabod fell for Katrina despite her engagement with Abraham, aka the future Headless Horseman. Ichabod tried to reason with The Weeping Lady, whose name was Mary Wells, that they should not be together and Mary grew extremely jealous and accused Katrina of seducing Ichabod away from her. However, suddenly she left Ichabod alone and went back to England, never to return or get in contact with Ichabod again. Until now.

Mary's jealousy becomes the main point for her attacks. She must have believed that Caroline's affection for Ichabod was returned as after he revealed to her that he was married, he visited her at her home to apologize for embarrassing her. Therefore she also went to Caroline's home and killed her.

Mary also goes after Abbie after she very clearly sees Ichabod's devotion for his fellow Witness. While the duo is in the library looking for more information about the myth of The Weeping Lady, Mary grabs Abbie and attempts to drown her in a lake she creates in the middle of the library floor. That's when Ichabod realizes the Weeping Lady is going after those about whom he "cares most deeply."

This moment alone should launch a thousand memes seen 'round the world, but there's more. So much more. When the partners discover the identity of the Weeping Lady, they run to save Katrina as it seems she must be the top of Mary's hit list. They arrive in time to see a large puddle of water on the floor of Abraham's house where Katrina had been held and they rush off to save her. When Katrina finds them in the woods, Mary is killed thanks to a mixture of iron crossbow and dark magic from Katrina with the help of Abbie. Ichabod asks the dying (once again) Mary who turned her into a monster, she points at Katrina.

It turns out Mary had confronted Katrina about her relationship with Ichabod back in Colonial times and Mary accidentally died. Katrina tried to cover up the death from Ichabod and everyone else but Henry brought Mary back to life specifically to drive a wedge between his mother and father. Ichabod realizes what the audience has known all along, Katrina tells more lies than the truth. How can he, or anyone else, really trust her as their marriage and love story started with deception?

Basically Katrina needs to prove her loyalty more than ever to Ichabod and the rest of his team. But can this particular rift ever be healed? It'll be difficult, especially considering Ichabod's trust and loyalty towards Abbie, and his obvious jealousy of Abbie's flirtatious relationship with Nick Hawley. It's possible that by the end of this season, Katrina and Ichabod could be over for good.