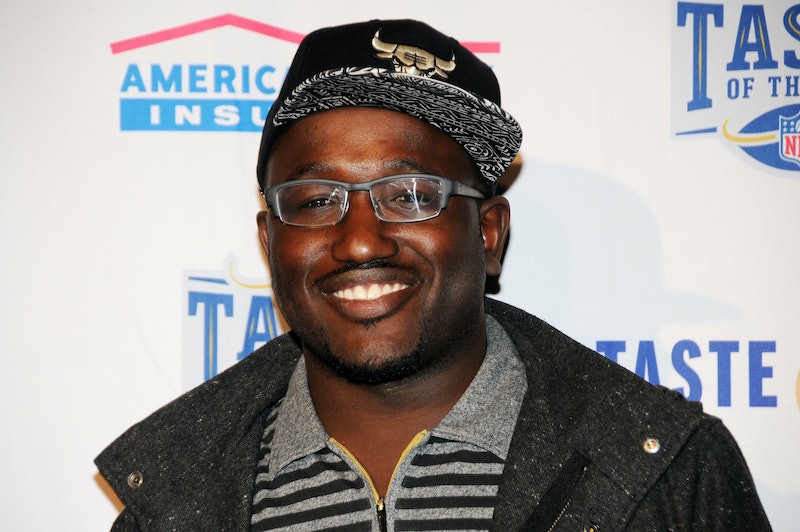 I have been cycling through a lot of emotions since I found out that Hannibal Buress called Bill Cosby a rapist during his stand-up performance at the Trocadero in Philadelphia on October 16. I don't blame you if you had to read that again, because the sexual allegations that have been brought against Cosby in the past are something that just didn't make an impact on the world for very long. In fact, that was the focus of Buress' bit. After all, Cosby is a beloved television dad and that seems to mean that the multiple accusations of drugging and assaulting various women is rejected by the public consciousness because, gosh, puddin' pops are awesome and the man sure knows how to wear an awesome sweater. And that's exactly the attitude that Buress drew attention to during his performance.

Thirteen? And it’s even worse because Bill Cosby has the f*cking smuggest old black man public persona that I hate. "Pull your pants up, black people. I was on TV in the ’80s. I can talk down to you because I had a successful sitcom." Yeah, but you raped women, Bill Cosby. So, brings you down a couple notches. I don’t curse on stage. Well, yeah, you’re a rapist, so, I’ll take you sayin’ lots of motherf*ckers on Bill Cosby: Himself if you weren’t a rapist. … I want to just at least make it weird for you to watch Cosby Show reruns. … I’ve done this bit on stage, and people don’t believe. People think I’m making it up. … That sh*t is upsetting. If you didn’t know about it, trust me. You leave here and google "Bill Cosby rape." It’s not funny. That sh*t has more results than Hannibal Buress.

As Gawker points out, Cosby has been accused of drugging and assaulting women in major news outlets such as the Today Show and People magazine as far back as the early '00s, with the assaults taking place between then and as far back as the 1970s. Somehow, this has been ignored despite multiple women — up to 13 different women — having been victimized by Cosby in these allegations. Buress' stand-up routine called us out on turning a blind eye all these years, but unfortunately, he chose not to stand by that when his words got the attention they deserved.

The 31-year-old comedian had a chance here to make some incredible social commentary that would be even more incisive in light of the child molestation scandal surrounding 7th Heaven star Stephen Collins. It was a chance that Buress did not take, though, if his response to the controversy is any indication. On Tuesday, he tweeted a familiar Anchorman quote that, to be perfectly honest, disappointed me immensely.

By using that Anchorman quote in this situation, Buress is perhaps implying that the outrage, the discussion, the long-awaited focus on the sexual allegations against Cosby, was never his intention. His tweet makes it seem like he's saying his speech railing against Cosby was all just a joke.

Although Buress' bit is described by Philadelphia Magazine as part of his routine and nothing more than an extended segment, Buress' speech was revolutionary. He used humor in order to call attention to a truly insidious issue. He took something that is uncomfortable, something that should make people uncomfortable, and made it more accessible through comedy. He made you chuckle, but he also made you think. There is, of course, no such thing as a funny rape joke, however, this maxim exists because the crime of rape is not funny. The act itself is horrifying and tragic and making light of it in any way devalues that traumatic experience and turns it into, well, a joke.

Buress made his rape joke stand out, though, by not treating the crime as the punchline. The punchline instead was the ignorance of the crime. That turns the perpetrator into the target, rather than the victim or the crime itself. And that's what made his joke so powerful. In fact, his bit seems to have done a lot just to inspire people to educate themselves about the sexual allegations against Cosby.

Buress' stand-up show yanked the blanket of ignorance that many of us — myself included — have been living under and forced people to take the initiative to do exactly as he suggested. Google it, but don't laugh at it. Even if the allegations are just allegations, they're not a joke and they should receive a lot more awareness and discussion than they currently do. Quite honestly, Buress got a ball rolling here. He has the ear of the people. He could at least continue to get the world to realize that far too much gets swept under the rug when it comes to rape.

Instead, he seems to be backtracking either out of fear of a potential slander lawsuit or out of fear of being considered the face of some kind of anti-Cosby campaign among the masses. Or perhaps its none of the above and Buress simply wasn't expecting his stand-up to turn into an entire social revolution. Well, the fact of the matter is that it happened and it might be 10 years too late, but people finally seem ready to listen.

Maybe Gawker is right and it didn't fit into our popular perception of Cosby before. Maybe Slate is right and people just don't think of Cosby often enough to think of his scandals. Whatever the reason, people are thinking of these scandals now thanks to Buress’ powerful stand-up, and it’s incredibly disappointing to see him attempting to underplay his actions in any way. He found what appears to be the perfect method to get this important information out there to a public who didn’t even realize that they weren’t caring enough. To take that back now is to undermine everything he’s already accomplished by speaking out.