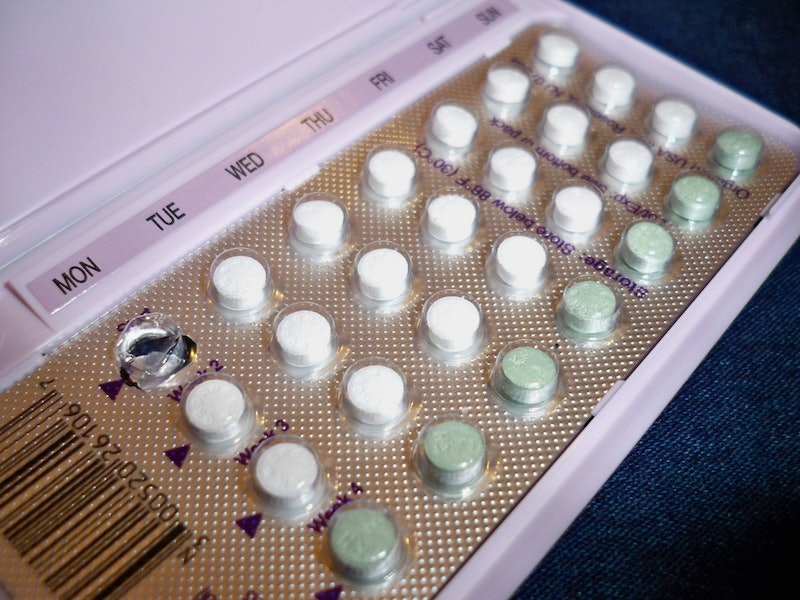 A poll conducted this month by Reason Magazine found that 70 percent of Americans favor over-the-counter availability for birth control pills and patches. Documenting the highest percentage yet of Americans in favor of making birth control available without a doctor's prescriptions, this poll is music to the ears of many reproductive rights advocates. Add to this the fact that the issue has been raised by both Democratic and Republican politicians alike recently, and one can't help but hope that we might finally be on the verge of joining the 46 countries where birth control pills are over the counter.

While these poll numbers are new, the ideas aren't — many doctors have been declaring the pill safe for over-the-counter sale in the U.S. for years now. In 2013, the American College of Gynecologists and Obstetrics advised that the pill be available without a prescription, and as this 1993 Public Health Policy Forum op-ed in favor of making the pill available over the counter shows, this debate has been raging on in health and policy circles for over two decades.

But while recent political discussions about changing the pill's prescription status have revealed possible complications related to the Affordable Care Act, one of the greatest stumbling blocks in the public consciousness is still the belief that the pills are too dangerous to dispense without a prescription. And if you don't believe me, try posting this piece on Facebook — within minutes, people you haven't spoken to since high school will be coming out of the woodwork, posting comments about how women will "misuse" the pill if it's made available as an OTC medicine.

And surely, if the pill was available over the counter, a certain percentage of users would take it incorrectly, like they do any OTC medication — after all, 33 percent of Americans have taken larger than recommended doses of medicines that don't require prescriptions. But the pill is actually one of the safest medications out there, and presents very little danger of overdose or misuse. In fact, these five over-the-counter medicines, which you can currently buy freely at any pharmacy, whenever you like, can deliver much more severe health risks with incorrect usage.

Though most over-the-counter painkillers come with some risks for overdose, acetaminophen — the active ingredient in Tylenol — is notorious as a drug that can cause liver toxicity in relatively small doses, particularly when chronic usage of Tylenol is combined with heavy alcohol consumption:The drug even played a role in over 1,500 deaths between 2000 and 2010.

Many countries, like Great Britain and Switzerland, now have limits on how many acetaminophen-carrying products a consumer can buy at a time — which may seem silly, but as Pittsburgh Poison Center medical director" Michael Lynch, MD, notes "[p]eople figure it must be safe to take a bunch if they can buy a gigantic tub of acetaminophen.”

Non-steroidal anti-inflammatory drugs — a family of medicines that includes ibuprofen and aspirin, found in brand-names like Advil, Motrin, and Aleve — are often used to reduce the pain and inflammation associated with illnesses like arthritis. But overuse can sometimes lead to issues like internal bleeding in the stomach, kidney damage, and increased risk of stroke.

The FDA has documented 13 deaths from over-use of sodium phosphate laxatives, and currently advises that adults over 55, and adults and kids with some health conditions (like those taking blood pressure-lowering medications) consult a doctor before using these OTC products. The FDA found that the worst dangers came not from chronic overuse, but from a large overdose of sodium phosphate laxative in a single day. And it's not just a risky product for those with health issues — laxative over-use by adults with no health problems can still lead to dehydration and electrolyte imbalances.

On their own, antihistamines like Zyrtec, Benadryl, and Claritin can cause dizziness, sleepiness, and impaired thinking even when used as directed (as anyone who's struggled to keep their eyes open at a work meeting after popping a Benadryl can tell you). But for those with pre-existing health conditions like kidney or liver disease, angina, or glaucoma, heavy usage of antihistamines can worsen their conditions.

Though they seem like they should have gone out of fashion with shoulder pads and crimped hair, over-the-counter diet pills still exist — and still pose a host of dangers for consumers. Though the notorious diet drug ephedra was banned by the FDA in 2004, other diet supplements like Bitter Orange pose health risks including increased heart rate and raised blood pressure, and the caffeine present in many diet supplements can cause side effects running from insomnia, irregular heart beat, and gastrointestinal issues to nausea and muscle tremors.

More like this
6 Abortion Advocates To Follow On TikTok
By Sara Youngblood Gregory
Conversations With Friends' Endometriosis Scenes Are As Brutal As It Gets
By Ivana Rihter
Lance Bass Says This Workout Machine Has Changed His Life
By Kaitlyn Wylde
6 Full-Body Tabata Workouts, Straight From Trainers
By Carolyn Steber
Get Even More From Bustle — Sign Up For The Newsletter