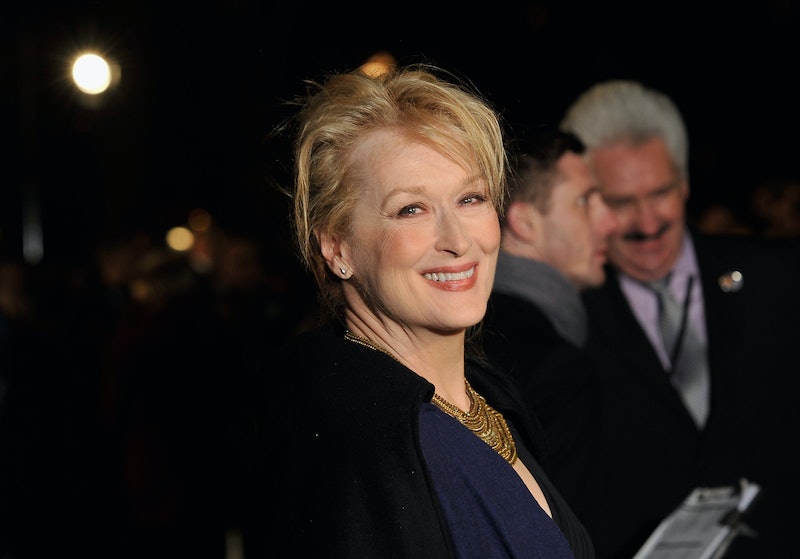 If you're getting a head start and wondering who to place your bets on for 2015 or 2016 Golden Globe nominees, Meryl Streep and Hugh Grant are here to say hello. Or at least, they're here to sign on for the next project by Stephen Frears, the director of Philomena. Considering Philomena was nominated for four Oscars last year — and considering that Meryl Streep is to award nominations what misguided commenters are to YouTube — I'd say your bets are safe.

According to Deadline, the project in question is a movie called Florence, which centers on "the true story of Florence Foster Jenkins, the New York heiress and socialite who coveted a career as a great opera singer, but who lacked any real ability." Streep, of course, has been blessed with all sorts of talents from the Hollywood heavens and so is actually a pretty talented singer. Whether she's up to opera snuff is obviously debatable, though, and even if she's not... well, I'm sure she can just fake a lack of talent. Acting!

Grant, for his part, will play a man named St Clair Bayfield, who was Jenkins' partner and manager who is "an aristocratic English actor ... determined to protect Florence from the truth that, while the voice she heard in her head was beautiful, to everyone else, it was hilariously awful." This movie already sounds awesome.

If we do indeed live in a world that is cyclical with our major actors — and all signs point to yes on that front — then it is about time for Grant to come around again. Starring in a movie with Streep seems like a good formula for a comeback, is all I'm saying. And this particular one's already in pre-production, so we might not even have to wait a whole eternity to see it.