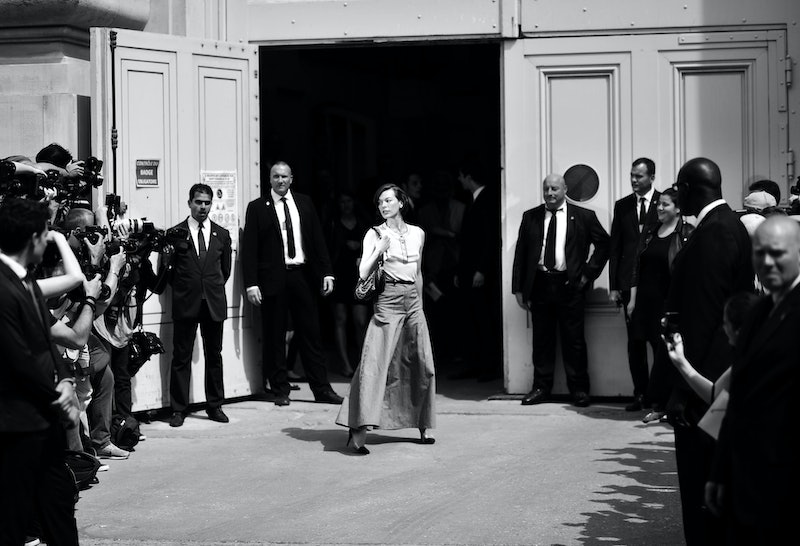 As New York Fashion Week approaches, there's no reason to cry your eyes out over missing your favorite runway shows. Feeling the latest Chanel? You'll be able to snatch up a knockoff online within days of the show — before the originals even hit brick and mortar stores, before the real Karl Lagerfeld has even had a chance to take off his gloves.

Is the booming knockoff industry — helped along by the immediacy of our digital world — evidence of a thriving free market economy that forces designers to stay ahead of the innovation curve, which in turn gives consumers more options? Or is this indicative of a sad reality in which designers are simply not given the same credence as composers or novelists because Congress refuses to treat fashion as an art form? The issue, unlike Alexander Wang's designs for Balenciaga, is not a clear-cut one.

In September of 2012, Sen. Chuck Schumer (D-NY) proposed the Innovative Design Protection Act of 2012 (IDPA), a bill that strove to grant copyright protection to fashion designs, which are currently left unprotected by copyright law. (Original prints, original patterns, unique color arrangements, and novel combinations of elements are protected, but the designs themselves are not. Even this doesn't stop stores like the infamously knockoff-happy Forever 21 from copying print after original print.) Under IDPA, designs would receive copyright protection for three years if they “(i) are the result of a designer’s own creative endeavor; and (ii) provide a unique, distinguishable, non-trivial and non-utilitarian variation over prior designs for similar types of articles.”

Unfortunately, the IDPA did not survive the transition between the 112th and 113th Congress at the beginning of 2013, and fashion designers were once again left without much heavyweight legal protection when it came to their original designs. They've got options, but they're cumbersome ones: Designers can apply for a design patent, but the application process often takes longer than the shelf-life of a given design (remember how long colored jeans were trendy?).

They can also trademark logos, symbols, and brand names (Louboutin owns the trademark rights to his easily-recognizable red soles, for example), or look for trade dress protection, but the latter requires apparel to acquire "secondary meaning," meaning there must be some sort of association in the consumer's mind between the apparel item and the designer. Suffice it to say that the whole process is fairly long-winded and tricky.

So why isn't fashion protected by copyright law already, unlike its artistic siblings such as sculpture and poetry? Because fashion is considered utilitarian (it covers the body, keeps you warm, protects you from the elements — you know, Boy Scout stuff) and utilitarian items aren't protected by copyright. Society may react to fashion as though it's an art form (just look at the massive popular response to the Alexander McQueen exhibit at the Met), but Congress still doesn't see it that way. If it keeps you warm and dry, it's not art — even if you did shell out $2,000 for it.

Anyone with the slightest bit of artistic inclination in her bones is probably fuming right now. (Idealistic fashion design students, feel free to grab a drink.) But many people argue that lack of copyright protection for fashion designs is a good thing for the very industry it seems to harm. In The Knockoff Economy: How Imitation Sparks Innovation, authors Kal Raustiala and Chris Sprigman argue in favor of fashion knockoffs. As Raustiala told NPR, knockoffs are a "turbocharger that spins the fashion cycle faster, so things come into fashion faster, they go out of fashion faster, and that makes fashion designers want to come up with something new because we want something new." In other words, knockoffs, imitation, and dog-eat-dog competition keep the trends flowing. They may harm the little guy, but they keep the big-picture market vibrant, productive, and full of jobs.

Uh, but what kind of jobs? That fake Chanel purse wasn't made in the U.S. — most come from factories in China, so the knockoff industry is not only not creating U.S. jobs, but it's not regulated by U.S. labor standards, either.

Do we really want our best and brightest design minds preoccupied by the need to "turbocharge"? Just look at other creative industries, like publishing, for example: There's a huge quality gap between those who churn out work (romance novels, suspense fiction) and those who spend serious time on their craft (Toni Morrison, Junot Diaz). Forever 21 has the manpower, the deep pockets, and the total shamelessness needed to churn out thousands of new "designs" every season, but it's absurd to expect high-end and/or independent designers known for their quality, innovation, and vision to churn out new work as fast as the market demands of them. Because it's not going to be good. It's not going to be worth the price tag. And then fashion truly won't be art — it'll be shallow, trendy utilitarianism.