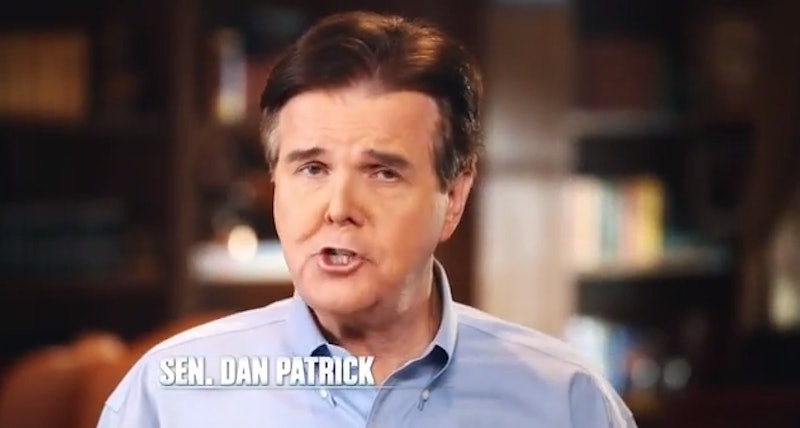 The GOP is gearing up for yet another clean sweep in Texas state-wide elections, which, based on its history, should not be surprising to anyone. But say what you want about Texas politicians and their seemingly endless wellspring of antics, they're running the second-largest state in the country. Unfortunately, a former shock-jock, filmmaker, sports bar owner and all around bizarre man is about to become one of the key players. Meet Dan Patrick, the (likely) next lieutenant governor of Texas.

In Texas, the lieutenant governor is more than just the person that takes over if the governor croaks. Anytime the head honcho is outside of state lines the lieutenant is the acting governor. The LG is also in charge of appointing Texas Senate committee chairs and guiding bills to their appropriate committees. Beyond that, they also direct what bills are heard on the floor and when. Basically, the governor may have the pen and ink, but the LG is pulling the puppet strings before a bill is ready to be signed into law.

Dan Patrick is currently leading his Democratic opponent (and Wendy Davis' right-hand [wo]man) by double digits in the race. So let's take the time to find out a little bit more about ol' Dan, shall we?

Some of the legislation he passed, of which he is most proud, is placing “In God We Trust” permanently in the Senate chamber for the first time in history; placing “Under God” in the state pledge; passing a $172 million tax cut for small businesses; and in 2011, the Sonogram Bill to protect women and the unborn, and this year passed a major school choice bill, The Charter Bill, the first change to Charters since 1997, and HB 5 which reduced STAAR tests from 15 to 5 and changed graduation pathways placing added focus on career as well as college. He has been a leader on education issues, veterans’ issues and Second Amendment rights.

Hm. So he counts forcing religious references in the state pledge (recited every day in many Texas public schools) and instituting a gross invasion of pregnant women's privacy amongst his shining achievements? That seems a little off.

Well, let's look at how he interacts with the people. You've got to be a savvy public speaker to be a politician, right? Here is an excerpt from his Facebook page talking about Duck Dynasty just after star Phil Robertson decrying "homosexual behavior":

This is an exciting time for Christians. God is speaking to us from the most unlikely voice, Phil Robertson, about God's Word. God is using pop culture and a highly successful cable TV show to remind us about His teaching. God has used unlikely people in the Bible before to share his Word throughout history. He is doing it again. Phil's words will reach more people than any preacher or conservative leader could. It's clear God is speaking to us and I find it exciting.

Just to be clear, according to Patrick, a man with a ZZ Top beard who is famous for being a bigoted redneck is delivering the word of God?

Help us Texans. We are all doomed.