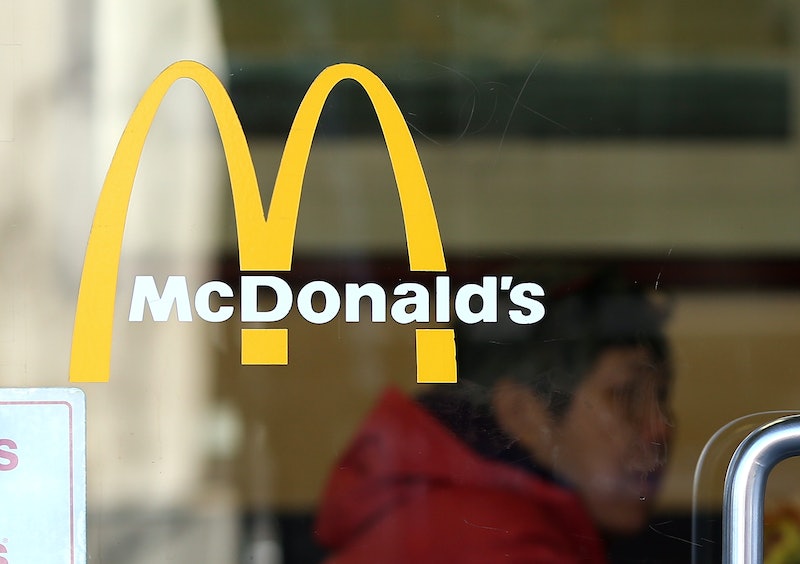 Feeling hungry? How about a thick, greasy Big Mac and a small bucket of soda to wash it down? Well, if your response to that question is "No, ugh, why would I ever do that," you should take heart. Because as it turns out, more and more people seem to be coming around to your line of thinking — McDonald's earnings plummeted 30 percent over the third financial quarter of 2014, the worst decline the company has suffered since 2003.

Basically, McDonald's is in crisis mode, and there's a lot of potential culprits to point the finger at. You've got the Chinese food safety scandal that rocked a number of high-profile fast food brands earlier this year — McDonald's as well as KFC, Pizza Hut, and Burger King were all buying meat from the Shanghai Husi Food Company, via a processing plant which was exposed for grossly unsanitary conditions back in July.

And you've got the rise of increasingly powerful domestic rivals like Chipotle, which is doing phenomenally well these days. And, of course, you've got the junky fast food itself, and all the bad publicity it can generate: not healthy, artificial-tasting, just not all that appealing.

Whatever the reason — probably a combination of all of it, really — things are looking gloomy for this once-undisputed titan of the fast food industry, and you could sort of see this dismal third-quarter report coming. After all, their second-quarter earnings were pretty foreboding, though not to this extent.

What Mickey D's Is Doing To Fix It

It's got to be provoking a lot of fevered discussion at the McDonald's mothership about how to turn this thing around. The availability of nicer fast-food options is obviously a strain (at admittedly higher prices — a Chipotle burrito can run you over eight dollars, so it's not exactly a bargain in any real sense), so McDonald's is responding by testing out custom, gourmet-style burgers in some locations.

But there's no telling whether that will be enough to stem the tide. It's not their only issue, not by a long shot — they're also under fire for their domestic business practices, as they're a major beneficiary of America's meager $7.25 per hour federal minimum wage. In fact, they were even recorded directing employees on how to register for government assistance programs like food stamps, to help offset the scant full-time wages they offer.

In fact, many of these nagging issues were highlighted Sunday by John Oliver, host of HBO's hilarious Last Week Tonight, as you can watch here. Of particular note is how much effort McDonald's put into polishing its image in the days leading up to Tuesday's woeful report — they fielded customer questions about their food, then paid former Mythbusters star Grant Imahara to film a sort of promotional ad aimed at vindicating the quality of their beef.

While it's too early to start predicting imminent doom and gloom for McDonald's — they're still one of the world's most iconic brands, and still hugely profitable to boot — it'll be interesting to see how things look when the fourth-quarter results roll around.

More like this
This Dog Food Is Not Only Super Healthy For Your Pup, It’s Also Better For The Planet
By A. Graham
This TikTok Hard Seltzer Hack Involves A Milk Frother
By Alexis Morillo
The 9 Best Easy-To-Use Coffee Makers
By Vanessa Spilios
On TikTok, Orange Wine Is The Varietal Of The Summer
By Madeleine Aggeler
Get Even More From Bustle — Sign Up For The Newsletter