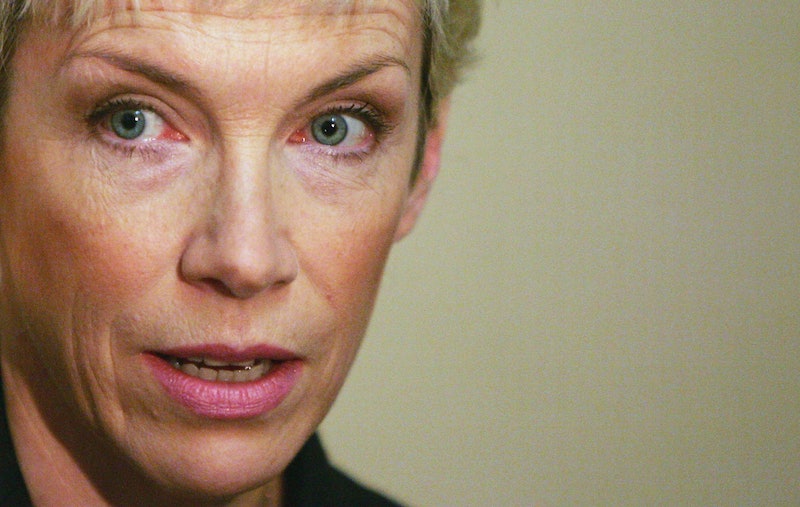 In an interview with NPR'S Steve Inskeep, Annie Lennox fired more shots at young female artists and their supposed damage to feminism. The Eurythmics superstar was promoting her new album Nostalgia and shared her two cents about what is and isn't feminism. Inskeep asked her about former opinions she had expressed that today's musical talents are too sexualized: "The reason why I've commented is because I think that this overt sexuality thrust — literally — at particular audiences, when very often performers have a very, very young audience, like 7 years older, I find it disturbing and I think its exploitative. It's troubling. I'm coming from a perspective of a woman that's had children."

Well, Lennox said it herself, really: she's coming from a perspective of a woman that's had children —that is, ONE single perspective. What she does not seem to grasp is that feminism itself is about choice and she is damning the choices of other women — women, not little girls, as she sees them — because she disapproves. It's an encore to her comments about Beyoncé; Lennox said that Queen Bey was "feminist lite and tokenist" and that she wanted to "sit down and talk to her." For what, a lecture about what it really means to be a feminist? Lennox really must hold herself in high esteem as a pillar of a powerful woman.

Her myopic view of feminism was glaring throughout the whole interview, as she went on to say: "Twerking is not feminism. That's what I'm referring to. It's not — it's not liberating, it's not empowering. It's a sexual thing that you're doing on a stage; it doesn't empower you." Lennox essentially glosses over the real issue of "twerking"—that it was appropriated by the likes of Miley Cyrus from black culture. Either Lennox is unaware of what significance twerking holds in the black community, or she doesn't care.

Yes, Annie Lennox was groundbreaking in her time as a female artist, but her narrow and harshly critical views of younger stars is unwarranted and she does not have the authority to dictate feminism. To be colloquial, I don't know who she thinks she is?! In a turn of delicious irony, Lennox had this to say about her album Nostalgia: "And there's a part of me — kind of, sometimes — wants to slow it down and go back. And the one thing you cannot do — and this is inherent, the sort of irony of the title — you cannot go back." It seems like Lennox wants to harken back to the past with her views of feminism, but she's going to have to accept progress or her opinions may become irrelevant.