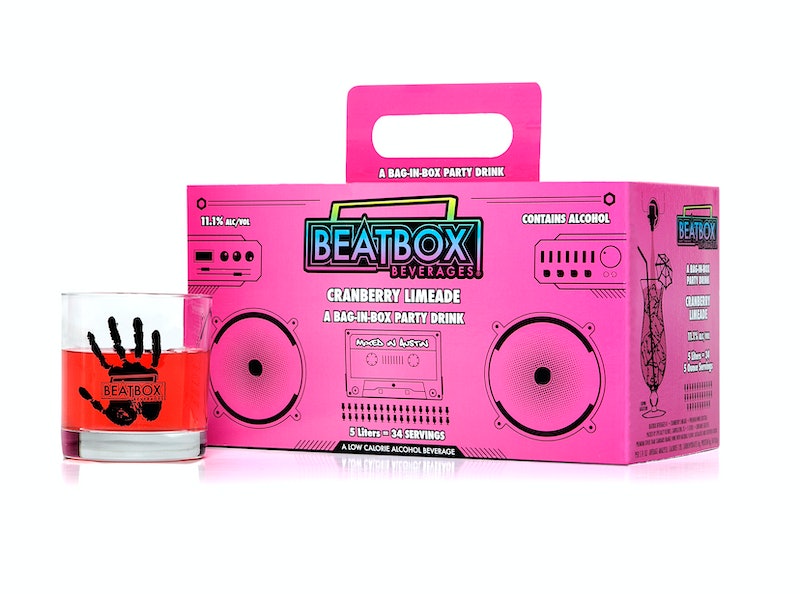 Bottles, boxes, cans, carafes — whatever container booze is in, I'll usually drink it. The new shape of alcohol is hitting the Oct. 24 episode of Shark Tank in the form of BeatBox Beverages. Headquartered in Austin, Texas, BeatBox Beverages offers five liters (almost the equivalent of seven bottles of wine) of boxed alcoholic goodness. Now as unbiased as I am in the shape that my alcohol takes, I do have some standards — and I usually steer clear from any booze that is neon colored, but do the Sharks?

BeatBox Beverages makes me reminisce about the good ole days of college — which is pretty much the marketing angle the company is taking. And the CEO, COO, and CXO (yes, those are all real corporate abbreviations) have that bro-friendly look that you'd imagine they would have. I find this whole marketing to the youth slightly problematic as I tiptoe my way to the age of 30. Because even though they aren't technically encouraging irresponsible drinking, they kind of are just by the sheer volume of their product. But as a 20-year-old — er, I mean 21-year-old, of course — I'm sure I would have been so down to partake of their elixirs in a boom box.

I think my days of drinking BeatBox Beverages have probably passed, but that doesn't mean they won't be able to persuade the Sharks to fund their party product. The preview of the episode shows the Sharks giving the drinks a taste, but it looks like they may not find them tasty (though the video could easily have been cut to mislead us).

I haven't tried the BeatBox drinks myself (they have a limited range of states where they are available for purchase), but I'm going to give them the benefit of the doubt and list the reasons why I think BeatBox Beverages could be a success.

They Are Wine Based

Like Neil Diamond and UB40 sang, "Red, red wine. Stay close to me." I'm into my wine and for you fellow wine lovers, the BeatBox Beverages are made with orange wine. What is orange wine, you ask? It's white wine where the grapes stay in contact with their skins. But, that's not to say the alcohol will actually taste anything like wine because of...

BeatBox sells Blue Razzberry Lemonade, Cranberry Limeade, Box A’Rita, and Texas Sweet Tea flavors. So it's pretty similar to some Mike's Hard varieties, except for the fact that Mike's is listed as beer under federal law according to their FAQ page. Sugary drinks like that aren't my jam, but I'm seriously intrigued by BeatBox Beverage's Simply Texas recipe, which is their Texas Sweet Tea mixed with lemonade. I'm such a sucker for Arnold Palmers.

They Support Slapping the Bag

The idea of "slapping the bag" to finish off a box of wine was such an amusing concept to me in college. If you had gotten to the point of the box where you had to unleash it from its casing and squeeze the sweet nectar from the plastic bag, you had to end it with a slap. BeatBox is not only cool with slapping the bag, they encourage it with #SLAPTHEBAG imprinted on most of their products.

After a night of drinking from a BeatBox, I know I probably wouldn't want to follow most directions, but when the bag tells you to slap it — you gotta slap it. But this goes back to the whole problematic marketing of binge drinking, so this may not be a huge sell for the Sharks, but it's sure to be a sell for those crazy, BeatBox-drinking kids.

I mean, let's be real here. The whole drawl of BeatBox, besides its novelty shaped box, is the fact that there are five (five!!) liters of booze in there. Most boxes of wine hold three liters (with exceptions like Franzia and Carlo Rossi), so they are definitely trying to corner the large-sized booze market. If that size sounds daunting, the company boasts that their product can stay good for up to two months in the fridge, so please don't try to finish it in one sitting.

Now, I don't want to be irresponsible here. So, if BeatBox Beverages does get backed by the Sharks and you end up partying thanks to them, remember this vital advice: