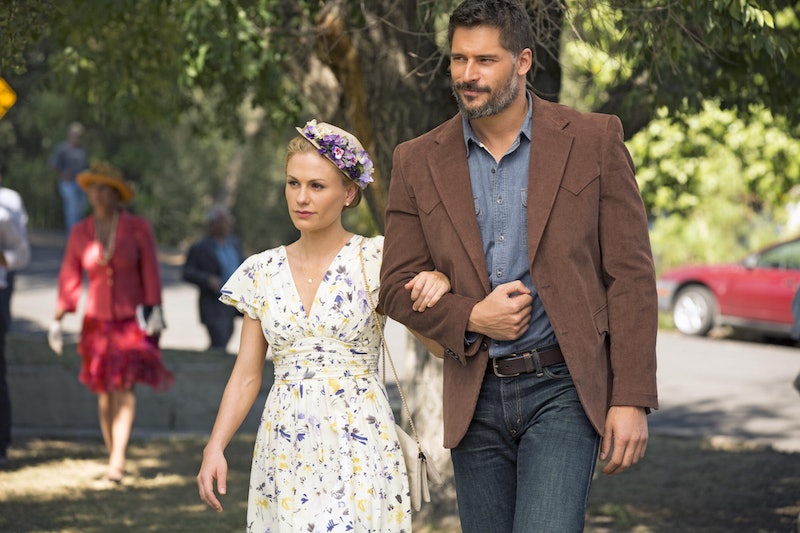 As you may have heard, True Blood is finally meeting its maker — well, not it's maker, because vampires meet their makers just before they become vampires. Let's say the long-running HBO series is meeting the sun ... or receiving the true death, as one of Bon Temps many vampires might put it. And while losing Alexander Skarsgard's screen time is a bloody shame, you've got to admit: it's about damn time somebody put this rabid series down.

Are you still convinced that it's too soon? Well, I'll help you out, punkin. Here are a few little ol' reasons it's a good thing the Bon Temps crew is waving goodbye (a year from now, so calm down).

1. Our Hearts Can Only Take So Much

This one's for you, Sook. (Don't even get me started on Jess and Jason.) The last few episodes of True Blood's sixth season, Sookie (often pronounced Sookeh, if you're a real aficionado) sort of made a joke out of how much of a runaround Miss Stackhouse has given viewers. From her eternal love for Bill, to her deep love for Eric, her quiet love for Sam, and her teasing love for Alcide, Sookie has been all over the place. The series sent her off to check with her past suitors — she even tries to tell Sam she always thought they'd end up together (collective scoff please) — as she contemplated marrying the soon-to-be evil (again) Warlow, who also thinks she's the Earth to his boundary-challenged moon.

Now, Warlow's dead, Sookie's playing house with Alcide, and Bill is looking longingly after his one-time fae-girlfriend. Look, wild romance is one thing, but we're only human, True Blood. Like even the best of rubber bands, you can only stretch us in so many directions before we snap. Pick a spot for Sookie's ever-morphing fate and call it a series wrap.

2. Vampires Don't Age, But Actors Sure Do

After six years, nothing is going to stop True Blood's actors from getting older. (We all know botox isn't exactly a great solution.) Sure, you can employ clever lighting and makeup, soft lenses, and kind angles, but sooner or later we're going to realize that the vampires who're supposed to be frozen in time have quite a few more laugh lines than they did in Season 1, and that's no fun for anyone — the actors included. No TV show is worth destroying the self-images of these actors we've come to adore — or our grasp of Bon Temps "reality." Right?

Seriously. True Blood, you have been twisting my tired little mind into tiny pretzel-like knots with no logical connections or pathways. Especially with that season finale. Why is there a portal to another world in Sookie's bathroom and why does it just work any time it's convenient? How come Andy's rapidly aging teenage faerie daughter stopped when she turned about 16 and got really, really pretty? How is Jason suddenly in love with his former vampire captor? Alcide leaves the pack and boom: Sookie is ready to stop teasing him and settle down? Where is Pam? Does she know Eric just got burned up in the Alps? And Tara. Do I even have the capacity to wrap my head around the part where Tara feeds from her own religious zealot mother?

I definitely can't be bothered to worry about what happened to Anna Camp's Sarah or if Sam's girlfriend is going to birth a shifter or how he became mayor in six short months. And I certainly don't have patience for Bill writing a full-length novel, having it published, and then going on a book tour in less time than it takes for a woman to create a child in her womb.

Let's unwind this nonsense and move on already, okay?

4. If You're Not Going to Appreciate Lafayette, Then Set Him Free

One of the main reasons I kept watching True Blood despite the fact that I wasn't originally a fan of vampires or supernatural drama was one Mr. Lafayette Reynolds. He was the one willing to get a little dirty for the sake of a good joke, he had a dark sense of humor, and he was always good for some much-needed truth and commentary.

But then, when his part became larger and he was found to be dealing V for Eric, we started to see that Lafayette was so much more valuable than we could have imagined. Somehow, since his last big story line with Jesus, his now deceased boyfriend, Lafayette has been relegated to a background character. He only comes in when the plot needs to move, or someone needs a scene partner. This is unacceptable.

If True Blood can't use this wonderful character right, maybe they shouldn't use him at all.

5. It's Been Seven Entire Seasons of Turning, Burning, and Bloody, Exploding Vampires

Finally, even Sex and the City knew it was time to call it quits after six seasons — and that was a show that put Sarah Jessica Parker in a newsboy cap with hot pants. Listen to Kenny Rodgers, TV people: You gotta know when to fold 'em.