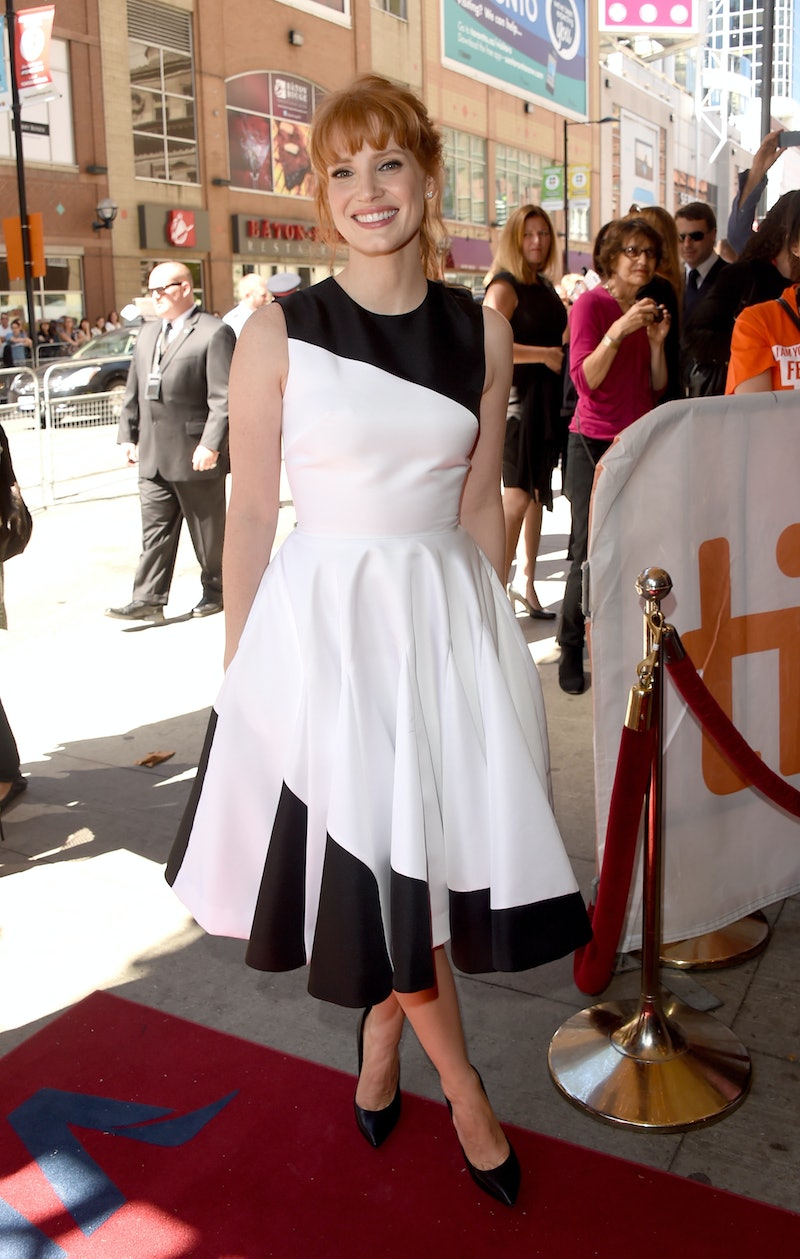 Jessica Chastain is one of the biggest feminist voices in the industry, but that's not the only reason she's so lovable. If you're not following her on Facebook, you're missing out on fun, candid photos (like her doing karaoke with Tom Hiddleston — more on that later) and silly status updates that make her the BFF of my dreams. If you want to imagine a day in the life of being Chastain's pal, just turn to Anne Hathaway. In the New York Times' profile of the Interstellar stars, Chastain touched on being "awkward" on set. "You were not! You were charming as can be. You taught us all how to make a poached egg," Hathaway countered. "I’d just finished cooking school. And that’s not nerdy? Come on," Chastain replied. Anyone who can help make the perfect eggs benedict is perfect in my book. The kicker is that the redhead is actually a vegan, so she was putting her personal preferences aside for the good of a lesson.

Though it would be enough to just adore Chastain on social media and via fun soundbites from her actor friends, there are plenty more fun facts about her where that came from. Read on for 10 more, but prepare yourself: you'll immediately want to be her best friend.

Her cooking skills are so on point, you'll want to co-host a dinner party

"I make a mean risotto! Really, really good. My favorite cooking is when it’s cold outside," she told Live For Films. "I do really good poached pears with sweet-potato ice cream."

But if not, the vegan food truck she bought her mom could cater your event

Chastain just bought her mom a food truck in San Francisco. Her mom is newly vegan, but Chastain has been vegetarian for 16 years and vegan for seven.

She's also a ukulele player and loves jamming to Radiohead

"I couldn’t travel with my guitar, so I started playing the ukulele," she told ELLE Canada . Her favorite song to play is The Flaming Lips’ "Yoshimi Battles the Pink Robots," but she also loves Radiohead's "Creep." Looks like she can also play the banjo, because, of course she can.

She has the cutest three-legged dog named Chaplin

Can't even handle him. He's also an actor, thanks to his first role in The Disappearance of Eleanor Rigby. Here, enjoy another adorable photo of him:

She admitted her love for HGTV in USA Today. Does she love regular House Hunters, too? Does she get annoyed when people complain about the colors the walls are painted? Burning questions I have.

"I'm a very superstitious person. I'm walking onto the plane as we speak. I'm putting my hands on the outside of the plane and my feet are on the lip of the plane," she told Michael Shannon in Interview. "I have to do it every time before I fly." This, she says, stems from her fear post-9/11.

Her hair color is real

You probably know this by now, but Chastain is 100 percent a natural redhead.

Robin Williams gave her a scholarship to Juilliard, and she had famous friends in school

Williams gave her a full ride to Juilliard, where she was in the prestigious Group 32. Chastain was actually the first person in her family to go to college. During school, she was roommates with actress Jess Weixler, and she was pals with Ugly Betty's Michael Urie.

She's too shy to ask celebrities for photos

How adorable is that?

However, she does sing karaoke with Tom Hiddleston

This was her birthday party this year. Her life is the best.