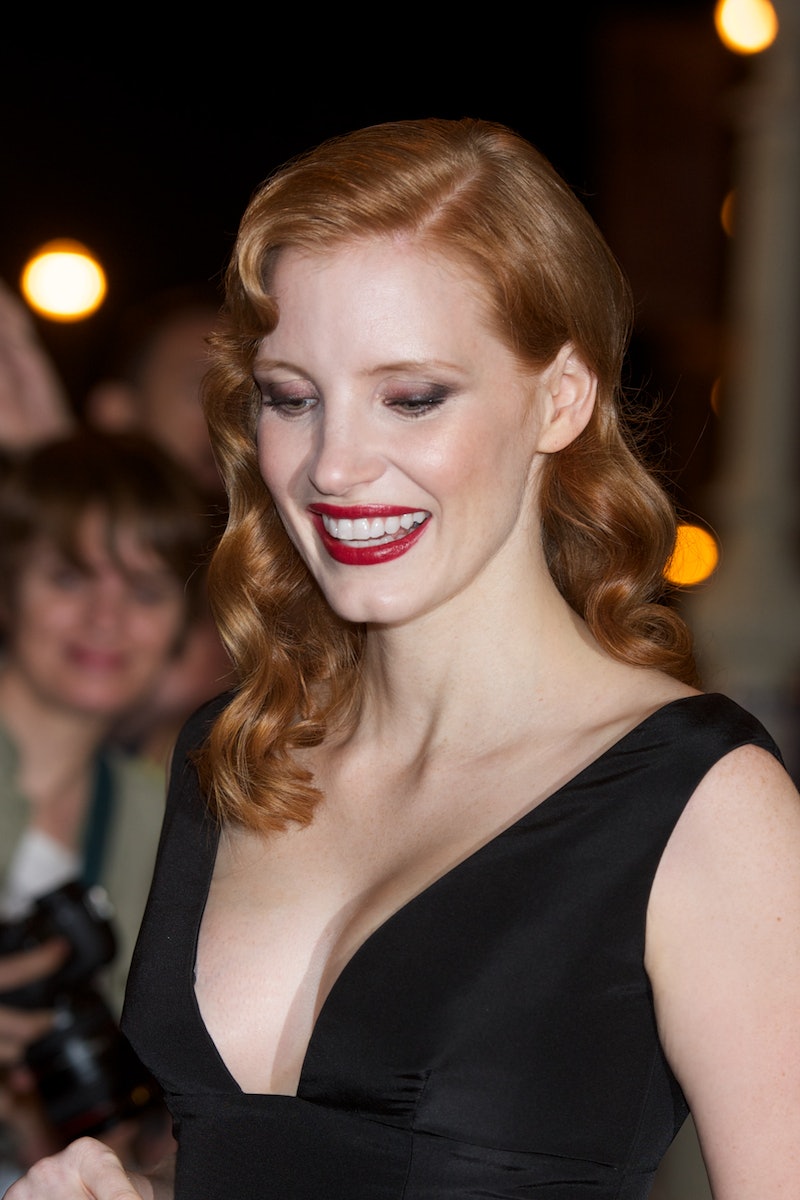 It's been a banner year for the luminous Jessica Chastain, whose highly anticipated films have all yet to be released. On her roster are Miss Julie, The Disappearance of Eleanor Rigby, Interstellar and A Most Violent Year. Aside from her inimitable acting skills and her ability to transform herself tenfold on screen, Chastain has also been a powerful voice for women in Hollywood, and as her star rises, so grows her advocacy and influence as a feminist voice in the entertainment industry.

Chastain really entered as a force in Hollywood with her role in The Help in 2011, and since, has gathered a number of electrifying and difficult roles that explore and honor so many different types of women and their stories, including her turn as Maya Lambert in the military thriller Zero Dark Thirty, which earned her a Golden Globe. It's her willingness to dive into these complex characters that makes her so wonderful — she's a chameleon on screen that gives life to so many unique types of women. But off-screen, too, Chastain is slowly but surely asserting herself as a strong, feminist voice in support of female actors in Hollywood. Not only is she SO supportive of her colleagues (she especially loves to gush about them on her Twitter), she has stepped out and voiced opinions that needed to be heard, but weren't often being vocalized by other women in Hollywood.

SHE SPEAKS HER MIND ABOUT THE IMPORTANCE OF FEMALE CHARACTERS

The Disappearance of Eleanor Rigby has already been a success on the film festival circuit, but Chastain was vocal about her disappointment that the film was edited in a way that might minimize the titular female lead's role. As she told The Wrap:

I don't mind if the character is a small character, but I would just like her to have a journey in the film. Sometimes the characters are just there as a prop to further the man's story. I don't mind playing a woman that is a tiny part, but how does the story affect her? What can I play in the end that's different from the beginning? Otherwise, it doesn't make sense, because it's just like being a prop.

SHE TAKES ON TOUGH ISSUES IN HER FILMS

In the upcoming Miss Julie, a period piece set in 1890 and also starring Colin Farrell, Chastain plays the aforementioned Miss, and the film raises questions about the line between force and consent and how those perceptions have changed over the course of the last century. There's a moment in the film where Farrell's character tells Miss Julie, "I may be partly to blame, but do you think a man in my position would even dare to look at you if you hadn't asked for it?" Chastain said of the line, "That line is still relevant today."

SHE TALKS CONSENT AND VICTIM BLAMING REGARDING THE NUDES HACK

Speaking of consent, Chastain also related the controversial topics in Miss Julie when asked about the nude hacking scandal. She offered condolence and anger to the celebrities who were victims, and highlighted the crux of consent versus victim-blaming: "To me they're not leaked photos, they're stolen photos. Me appearing nude in a film is my choice and I find it so terrible that these actresses have been completely victimized. Anything sexual which does not have the woman saying 'Yes'... is a big problem to me."

SHE'S REDEFINING HOW TO SAY NO

In a super sweet interview with Refinery29 and her BFF, fellow actor Jess Weixler, Chastain remembers a young struggling actress in Hollywood asking her for advice on what to do about the pressure. Chastain's advice? Be true to yourself: "A woman should be comfortable and understand that her value is from her talent and intelligence, and not from her sex. Saying no and standing up for yourself is the sexiest, most intelligent thing you can do."

SHE'S ALWAYS LEARNING AND IMPROVING HER OWN VIEWS OF GENDER NORMS

When reading the script for Zero Dark Thirty, Chastain was initially surprised that a woman had such a big role in the operation — but that made her step back and reevaluate the ingrained ideas she had about women in the military (and high positions in general). As she said in an interview with The Big Issue, "When I was reading the script, every page I read was a shock to me, especially about Maya and the role she took on. Then I got upset that it was such a shock to me. Why would I assume a woman wouldn't be involved in this kind of research?"

SHE KNOWS WE'RE LONG OVERDUE FOR A FEMALE SUPERHERO

She's not shy about putting out her Superhero Energy into the world, telling Marvel she would only want to play a superhero if it was of the badass variety, not the typical girlfriend in a sexy suit kind: "If I do a superhero movie, I don’t want to be the girlfriend. I don’t want to be the daughter. I want to wear a fucking cool costume with a scar on my face, with fight scenes. That’s what I’d love."

Tell me somethin', where your boss at? (No, but really, this shot from her Instagram is just the tip of the iceberg — her feed is amazing, including candids with Al Pacino.)