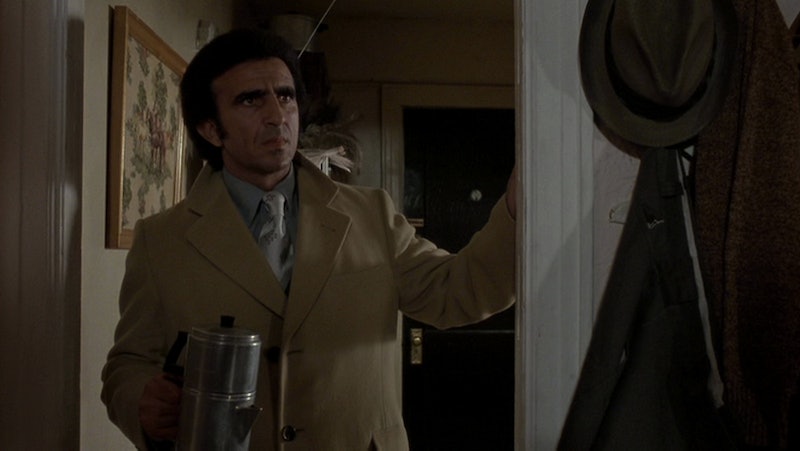 In its 25-year tenure, The Simpsons has doled out enough pop culture references to keep nitpicking audiences updating the Simpsons Wiki for the rest of forever. But a noted character actor found one of these running pop culture jokes jess clever and more like some serious intellectual property theft. Goodfellas actor Frank Sivero is suing The Simpsons over allegedly copying his likeness to create the character of Louie to the tune of $250 million.

Sivero, who notably played Frankie Carbone in Martin Scorsese's mafia blockbuster Goodfellas, reportedly filed a lawsuit amounting to a quarter of a million in damages over The Simpsons character Louie. As Rolling Stone reports, the defendant alleges that the Simpson's likeness "diluted the value of the character created by Plaintiff, and contributed to the 'type-casting' of Plaintiff." The actor claims that some of The Simpsons writers were his neighbors in 1989, around the time that both The Simpsons premiered and Sivero was building the Carbone character for Goodfellas, released in 1990. Sivero's lawsuit alleges that the writers essentially ripped Louie's character off of Carbone:

They knew he was developing the character he was to play in the movie Goodfellas. In fact, they were aware the entire character of "Frankie Carbone" was created and developed by Sivero, who based this character on his own personality ... Louie's appearance and mannerisms are strongly evocative of character actor Frank Sivero.

If you aren't familiar with Sivero's work, he's been in everything from The Godfather II to The Wedding Singer. He's made a name for himself as a character actor by playing variations on the role of a wise guy. Type-casting, noted.

Louie's first documented appearance on The Simpsons didn't happen until 1991, in the series' third season. The character is Fat Tony's right hand man, who appears in "Bart the Murderer." Louie has appeared 15 other times on screen, and has since become a recognizable citizen of Springfield.

Incidentally, that particular episode held multiple references to Goodfellas . If you'll remember, Bart lands a Henry Hill-reminiscent job as an errand boy around the Springfield mafia's social club. Just like Ray Liotta's character in the film, Bart mixes drinks for Fat Tony and his gang, and there's even a cigarette heist. To complement all those references, the episode needed a fitting gang of mobsters. Enter Fat Tony, who seems to be a composite of Paulie from Goodfellas and Marlon Brando's character in The Godfather, and Louie, a dead-ringer for Frankie Carbone. This Scorsese joint is one of my favorite movies, and admittedly, each time I see Louie's character, I think "Oh, Hey! It's Frankie!"

Aesthetic similarities aside, this character is one of many aspects of an episode that openly parodies Goodfellas, so the argument of claiming plagiarism is a bit weak in my opinion. While I understand Sivero's grievance of being pigeonholed into playing mobster-type characters throughout his career, allusion isn't plagiarism. Also, Sivero could have tried to rectify this issue in the past. After all, the character has been appearing on the show for 23 years. Making his move the very year after Fox made a $1 billion mint for selling all the past Simpsons episodes to FXX reeks of opportunism. I expected more from you, Carbone.