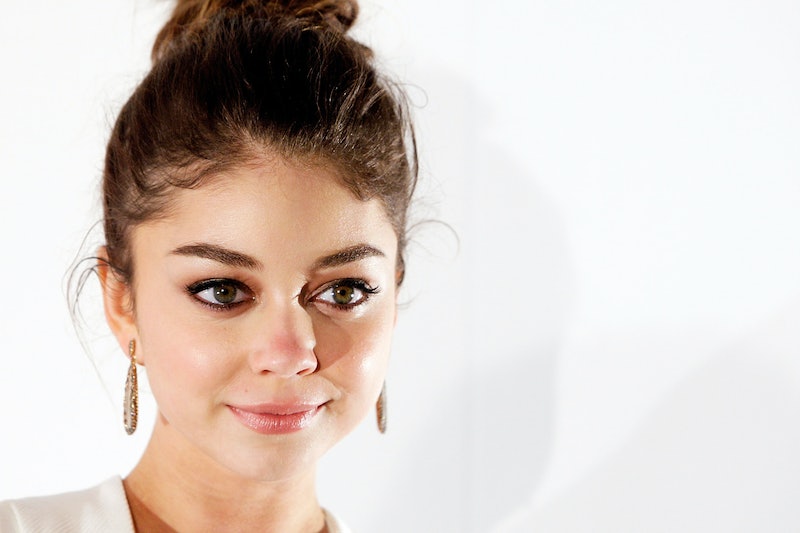 Considering Modern Family Sarah Hyland just went through an unimaginable ordeal concerning her abusive and now ex-boyfriend Matt Prokop, it's amazing to see her not only still working as much as possible, but also staying positive the best she can. Just last month, Hyland filed for a restraining order against Prokop, in which she stated that he assaulted her on multiple occasions. Thankfully, a judge granted Hyland a permanent restraining order based on her testimony, which is undoubtedly a huge weight off Hyland's shoulders, but it's a horrifying situation to have lived through. To see Sarah Hyland staying so positive and continuing to work so soon after is not only amazing since she's a young star in a very influential position who can hopefully inspire others, but it's also amazing to see.

Case-in-point: During a recent event for the ASPCA to promote pet adoption in NYC on Tuesday night, Hyland kept her focus firmly on the issue at hand — why more people should consider adoption when getting a pet — but she did comment on how she's doing after the incident involving Prokop. During an interview with Good Morning America , Hyland commented: "I'm great. I'm working on Modern Family and I'm spreading awareness for adoption and cleaning up pets." Similarly, at the event, Hyland commented that she is "doing great" after the situation.

It's classy and to the point — not to mention lets Hyland keep the spotlight on the great cause she was actually there to promote. Can we give this girl some applause?