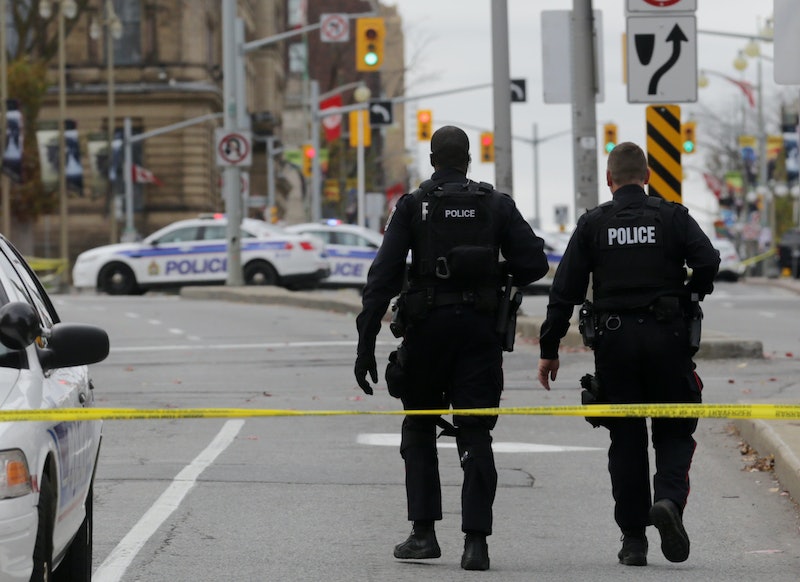 After at least one gunman shot and killed a soldier at an Ottawa war memorial Wednesday morning, he ran into the Canadian parliament and exchanged gunfire with police. One attacker is dead on the scene, but the Ottawa police chief called the situation “ongoing” and “fluid” in the Canadian capital during a press conference this afternoon. Ottawa’s Parliament Hill remains on lockdown as police search for other possible suspects in the shootings. It is still unclear whether or not any other gunmen were involved.

“What I can tell you is that a male suspect is now deceased,” Ottawa Police Chief Charles Bordeleau said at a Wednesday press conference. When asked, the police chose not to comment as to whether or not the deceased gunman was a Canadian citizen.

Bordeleau also noted that it was too early to determine what the shooter’s motives might be. The attack came two days after a hit-and-run by a radical Muslim convert Monday that left one soldier dead and another injured. Over the past few days, Canadian intelligence reported increased online chatter among radical groups, including ISIS, and has increased the nation's terror threat level.

Explanations will have to wait until police can secure Parliament Hill. As of 3 p.m. local time, the area remains on lockdown. According to Bordeleau, the threat has not been completely eliminated.

This is an ongoing operation. We are asking members of the public to stay away from the downtown core. People in the downtown core are asked to follow the instructions of their building’s management.

Chaos ignited through Ottawa’s house of government Wednesday mid-morning as shots rang through the Parliament halls, police fanned out through the city center and people were urged to take shelter and avoid doors and windows.

At the time of the shooting, Prime Minister Stephen Harper was in the Parliament building to address the Cabinet, Reuters reported. Harper left the building safely, according to his director of communications.

Neither the Ottawa police nor the Royal Canadian Mounted Police could comment at the press conference as to whether or not the gunman had specific targets in mind when he entered the Parliament.

Earlier in October, Canada announced its intention to join the U.S.-led bombing campaign against the Islamic State of Iraq and Syria currently fighting to establish control over large swaths of the Middle East. There is no indication yet that Canada’s military decision played a role in the attacks on its armed personnel Tuesday or Wednesday.

To watch Bordeleau's statement, see the video below: